They stare, You steer, I store... or is that 'eye sore'! Intense wordplay to get where I am today.

Oh well, we’ve been there, done things and seen stuff.  Always looking back it seems like a long time but with life's momentum cruising DB time has flown and I can make it literally go faster. 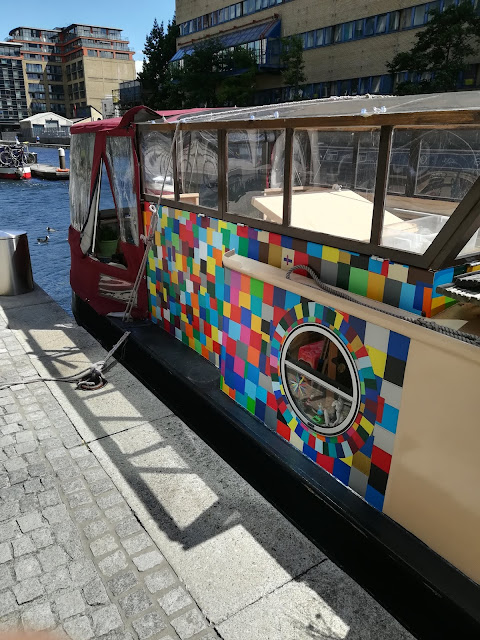 We played the London Game mooring in Merchant Square Paddington Basin. Well honestly we had a valid reason to overstay and C&RT never responded to Captain’s email about his major health issue. If he had given birth he would have been given 6 weeks paternity grace to settle the sprog into life as a continuous cruiser.

There was a major incident one night, I was asleep and heard nothing when a feline miaow risked one of its 9 lives with an uninvited visit on DB entering through the open side hatch. It was a summer’s night and there was no point us baking in a hot tin can! The report was “Cat aboard, Dog immediately on alert to the intruder, Cat took flight up the curtain knocking over my beautiful paua encrusted globe.” No injuries but an irreparable loved damaged good. Next day the cat owner said her cat doesn’t like dogs and we should have our side hatches closed or have shutters to go over our side hatches.... Cptn’s response was “Cat shouldn’t be locked out of its boat and should be kept on board its boat.”

A couple of days later a big wind blew and we got rattled. Cptn got up in the morning, like most people do, and went outdoors into the Wheelhouse and looked up to notice with a clear vision that the miraculous polycarbonate plastic roof had disappeared! Oops had it floated away? No, we had clipped it onto the stern canopy and the roof had flipped over and rested, still attached, on top of the stern canopy. ‘There’s a hole in my roof...’ Cptn Fixit got on with the job, see later Blog for new roof.

Anyway, to sever a long story we served our London time dotting the I’s and crossing the T’s with a satisfactory ending and cruising off into the watery sunset.

Well, I totally lost the cruise elation after Regents Park.

It has been 4 years since we had been on these waters and they were grim.


I didn’t recognise Camden Locks. There were the Locks but no volunteers to help lend a helping hand, just a single-handed boater who shared the Lock. Actually, he was very considerate and worked his windlass at the Lock rather than stay on his boat. There is a lot of construction underway at the large building site beside the Canal and it wasn’t pretty. I suppose it is the story of life, ‘Nothing stays the same’.


Outside at the pub, locked metal gates keep the gongoozlers out, I mean at a safe distance. But there was a ‘random’ inside the gates by the Lock asking for a key so she could be let out. We did consider letting her spend her holidays there!

Soon we were through the 3 Locks and glimpsed Battlebridge Basin, where I had tried but failed to get a summer mooring. I remember being so disappointed that the almost promised pricey mooring didn’t turn out, and now passing BB I was so thankful that we hadn’t spent a penny on our summer mooring.

Granary Square came into view and it was a different picture to 4 years prior. Many boats moored around there.  Does it get better? I don’t think so. Once through the Islington Tunnel we passed lines of boats double-breasting. Get me gone; this is not the canal life for me.


It’s London Canal life where boats are an affordable option to live in the centre of this highly populated city. The canal boats became less to nonexistent once we passed the Hertford Navigation that leads to the R. Lee.

In the distance I see Canary Wharf, it looks stunted now, after its unique stand in the 90’s. Docklands still holds a bit of excitement in my distant memory. I remember good times in the East End, Royal London Borough of Tower Hamlets. We got to the Lock gates to Canary Wharf I couldn’t get them to open. Gongoozler help needed! Thanks to the veiled lady for her kind support. Yay, last Lock before the Thames Lock.

And so endeth the Regents Canal and begins the excitement to get on the Tidal Thames.

I’d booked to leave, late afternoon, the next day with friends that is a Sunday. Nearly all aboard and the Lockie had switched on the green light for us to enter the Lock. Cptn was meeting a late arrival friend at the DLR station and I started to panic. Lockie gave us a long 2 minutes and all were aboard, the wind was blowing and my excitement was lost. Hindsight, could be the replacement word for ‘If only’.