OFF THE CUT, AND DRY

The winter that was spent, by us, in Spain leaving DB to rest in Ashwood Marina while we spent mostly dry days land based in Los Montesinos, Costa Blanca, Espana por favor. Our lifestyle over there goes pretty much as follows...waking up to Blue Skies, walking Della daily along the Med and stopping to drink a cortado €1,20 (beach price) or €1 (Los Montesinos). I met up with my band of merry men (Ukeoholics) and playing our Ukuleles almost every Tuesday, fun in the sun.

Time flew and we made the decision to sell our furnished currently listed with some local Inmobiliaria (Real Estate Agents), mainly because the random fireworks freak Della and it is heartbreaking to watch her shake uncontrollably taking her an age to restore to her normal chilled self. She is 12 years old and we want her to enjoy her later years and we endeavour to keep her health optimal.

We humanise our feeling for her and I am not slow to say “Cupboard love is the best love”.
I never got ‘a-round-tuit’ to write Lady Lock-n-Lol while I was in mainland Europe but I thought about it and here is a snippet from dry-land...

We met a couple of Brits who were thinking of buying a villa in Spain and they were reluctant to rent a car and drive on the ‘wrong side’ of the road. It reminded me of my hesitation taking the wheel
Many years ago, meaning into the ultimate decade of last century, I stated I would never drive on the other side of the road thinking that way I was making a defying death decision (could that be written as 3D?). I remember it was my first long distance motoring trip with Cptn in his Renault 4 F4 Van, in our halcyon days together, from Portugal back to England via Spain and France. A couple of times I almost grabbed the bull by its horn to risk driving but a passing view of crushed metal put me off. It was a bleak thought driving on the wrong side of the road using a Right hand drive meaning the passenger had the clearest view ahead. I got over that driving pause within months and I proved to myself that I was fit with my hands safely holding the wheel. I still recite the words of Keith, a DJ at Algarve KISS FM radio station, in my memory bank ‘Keep tight and stay on the right, if you want to stay alive don’t drink and drive.’

1993 We were living in Portugal and our wheels were Cptn’s trusty RHD blue Renault 4! There are many stories to tell in this adventure but I’ll stick with ‘a rotunda’ (the roundabout). Portugal 1993 it was early days in the Algarve for the, now ubiquitous, rotunda. Using a rotunda was rare and Portimáo had just one that I recall and it was hard to avoid. There was no Google to search for guidance using a rotunda in Portugal, then, but word of mouth and hand gestures were used. “The car travelling on the Rotunda has to give way to traffic entering the Rotunda.” How could that work? And driving on the Right means traffic flows anticlockwise! I couldn’t make sense of it then. I can only remember it as an accident waiting to happen. Thankfully the rule changed and traffic on the roundabout has priority.

Moving on 25 years, roundabouts in Europe are a way of life. Spain has numerous roundabouts, la rotunda, and work well. My Bugbear is drivers, particularly in la Costa Blanca not signalling intentions on la rotunda. In England the car indicator is used to indicate as you are going around the roundabout and indicates when you are going to turn off the roundabout. I use the Indicator, what else is its purpose other indicate what I am doing, important road safety. Undoubtably I have car Indicator experience and I believe in the Indicator. On the Walk-Della schedule we have a few beach locations to drive to, and we “go over” (speaks our SatNav) the roundabout at least  10 times to the beach. I have gained experience of Spanglish protocol using the Rotunda, if you are from Britain you will probably indicate your intentions from entry to departure of la Rotunda, quickly you’ll adapt to only signalling when you are going to leave the Rotunda. Maybe you’ll stop using your indicator altogether. If you adhere to the spanish Rotunda rule, you will drive on the inner lane, if there is one, until your exit is close. It works when you are aware of how it works but the danger point is entering the Rotunda. Drivers are not 100% reliable in indicating they are leaving la rotunda. Picture this; you are waiting to enter la rotunda. There is a car on la rotunda and it doesn’t signal to leave la rotunda but it exits it. You could have entered la rotunda if it had indicated it was leaving before your point of entry. Another car on la Rotunda appears and is not indicating it is leaving but it probably is so you begin to make a move. “STOP”. The car signals it is leaving la rotunda at the next exit! Confused or bored with my Rotunda-broken- record, I will end by saying don’t let me put you off driving on the other side.

The SatNav made me laugh on our drive back to Blighty when she spoke French in a literal way, locations were announced in ‘franglais’ and to make this simple imagine how she pronounced Angers and Le Mans.

So our winter in Spain is done and dusted and we are back on DolcieBlue. Soon we will be living on land in Kinver but we have agreed to keep DB under our ownership until we are ready to sell her. She is such a lovely home and means of travel in a small country. I cannot say goodbye to her just yet. 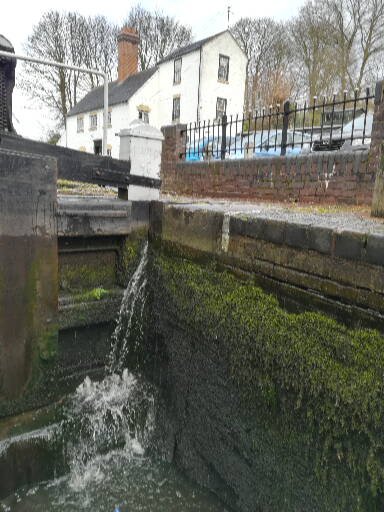 Posted by The Blondinis afloat at 07:34 No comments: