The month of May has arrived and we have spent a week undercover at Shobnall Marina. Undercover means not in dry dock but floating moored out of rain’s reach with a lean-to roof over AM.

The day before we went undercover, we arrived a few hundred metres away at Shobnall Fields, . We moored, on the 48hour Visitor Moorings, beside the late blooms of more than a thousand daffodils. It was a, without question, Spring day, - warm sun and happy people. The cruise from Willington was seamless. We left Mercia Marina on May 1st, departed like we were off on a long summer cruise. I had toyed with the idea of going to Stenson Lock for a cuppa tea and ‘winding’ there, when at the same time the engine would be heating the hot water in the calorifier. Sensibly Chris turned Right, rather than Left at the entrance and we moored just metres away where there is an open space for Della to chase squirrels and we have connectivity with our phones. No hot water though! And we could lift our ‘Stern’ box onto dry ground so Chris could paint it. While we were there I was able to motivate myself to finish the paua mosaic window sill that I started nearly a year ago.

AM had never lost the aroma of diesel even though the fuel tank was repaired last year. Chris lifted the floor over the ‘Bilge’ (i.e. where the engine is located) and noted that the area was covered in shallow water with a film of diesel floating over it. The motor hadn’t been started for some time as we have been static in the , and the rain has been less than in former months. So here we are on the move, again, and the injectors are spitting diesel. The bilge had to be emptied and there were two possibilities for disposal and only one choice. Chris chose the clean way using a plastic hand pump thingy (I’m a bottle blonde, now, I don’t retain the words like I did when my colour was natural mousey brown) and he quickly filled a large bucket with the cocktail of water and diesel. As chance would have it he found the perfect receptacle for disposal, on his Della circuit the next day, in the rubbish area. One Man’s junk is another Man’s treasure…..(kind of…).

It’s been lovely to be back on the Cut with different sounds, smells and smiles. After two nights close to we set off, early morning, at ‘tick’ speed to . Breakfast was at Willington Sanitary Station because we could and we needed to make use of the facilities. It was a slow trip with Chris and Della at the helm, while I set to with necessary tasks to do on my laptop.

Just before entering the outer ‘burbs of we go through our first lock shallow ‘Dallow’ lock. I call it shallow cos it’s not deep. We are now in Narrowboat area. Not fit for Widebeams, here, but 70 ft Narrowboats are accommodated. About 200m further along we get to grassy . We see NB Global Spirit, from our Pier at , and moor just in front of her. Global Spirit (Maisie) has just begun her 5-6 month cruise. Della has suddenly come alive with the bounty of park life, and apart from her being drawn to anything human, she is overwhelmed with her memory of having the tennis ball thrown. She loves the chase and barely gives me a chance to step off AM before she is trying to bite my ankles and bark, yes BARK for the ball! We managed to run her off her feet that evening.

Next day, Shobnall Marina was our destination. Another 300 metres away so we thought we’d breakfast before we chugged along. As we started moving along, the rain started and persisted with force! The case of ‘If’ we had waited for breakfast we wouldn’t have got wet. I didn’t get wet but Chris did!! There is a sharp turn at the ‘Winding’ spot outside the entrance which took us under a narrow towpath bridge. The has prevented unauthorized entry by having a footbridge under the bridge that has to be raised by someone in the know! We stayed under the bridge and waited for a boat, on our booked undercover space to move. During the wait Chris was able to retrieve our boat-on-wheels, which he had parked down the road and round the corner, and park it at the . 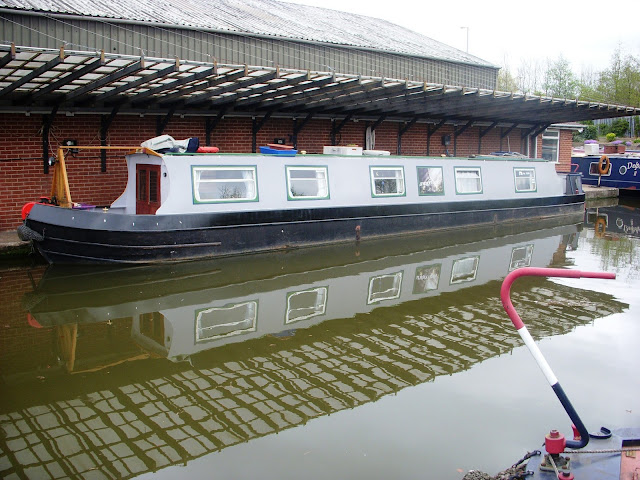 As soon as he arrived back at AM we were given the all clear to move to our mooring under cover! Sheer luxury and the sun was shining again. We got started straight away with getting plugged in to the electric and our sanding tools were shimming over the Port cabin side. (Port means Left, Port and Left have 4 letters!). A few hours later we had the first coat of satin Grey done. Chris, deftly, used the mini hand roller and I followed using a ‘dry’ paint brush in a rapid horizontal then vertical brush stroke manner. Writing it makes it sound easy but Chris had been slowly and surely working, over the last 10 weeks, towards prepping the sides to make this work stint go smoothly. The next day, the paint had dried, and we gave AM port-side, the second coat and turned her around to repeat the process on the starboard side. Shobnall Marina is compact compared to , and to turn around with minimal effort takes good planning and instruction. My job was to stay on shore and hold the Bow rope tight while Chris reversed the Stern out and I did a hand held pivot! Flat bottom boat smooth water glider!!

In the midst of painting, we had the Mechanic give AM a service. He did a great job and as a result we have a healthy sounding engine and the diesel smell is a distant memory. The contaminated receptacle was sent to the place where it should go. 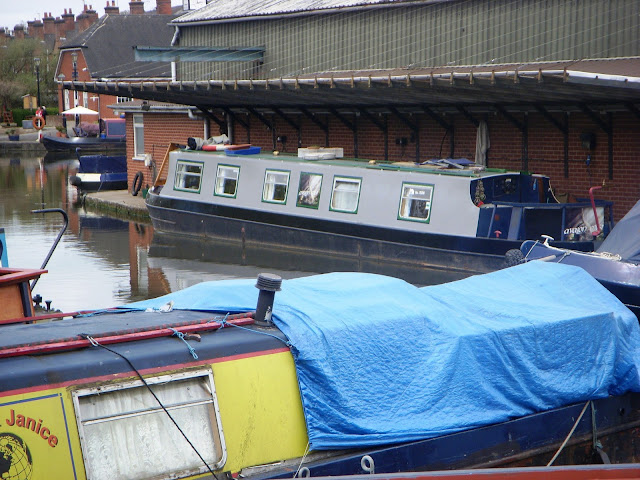 Yesterday, our time was up at Shobnall and we left and returned to Shobnall Fields. We thought we might moor up for a few days, there, but the weather is inclement so we have returned to Mercia Marina.

Posted by The Blondinis afloat at 13:55