DolcieBlue was unable to meet her last scheduled delivery date. Her delay was due to last minute paint induced psoriasis – my lay-boaty term given to her peachy paint blistering and peeling. As she shed, she was still shed – bound and needed to be rubbed and sanded, undercoated and reapplied generously with gloss peach paint that had well mixed in working agent hardener. She is now doubly confirmed for delivery, this Friday July 12th 2013. So this has given us unexpected time for a cruise.

Before we headed out, we had friends, Viv and Pam, visit from NZ. We took them for a short 9 hour return cruise to give them a taste of Canal. In fact it was Della who literally got the taste of Canal. We, girls, had decided to walk a good mile between locks. Nothing like the feel of the tow path track under foot. Della was walking ahead, behind Pam, and Viv and I were having a good catch up of days. Chat stopped when Chris sounded AM’s siren. “Why is he doing that?” I said. As I turned around I commented “Where’s Della?” I walked in the direction of AM, as Chris steered her into the towpath, leapt off  and reached into the canal and pulled out a bedraggled Della lump by her harness. Della had dug her claws into the muddy bank and clung on squealing for attention. Amazing that Chris heard her over the sound of  AM’s engine. She was unperturbed by the incident, gave a few doggy shakes with the idea of removing water in her hair and I attached her to a lead and we continued our walk. I expect it was a ‘chase me’ creature that tempted her to speed undercover back to the floating foliage on the side of the tow path. How she managed to get from A to B passing me unseen is a puzzle! A great day out was had by all.

A great perk of living aboard is the thought of moving can become a reality, within seconds. No need to pack but only untie the mooring ropes, thank you good morning. Our 10 day cruise on AM began under cloudy cool skies which within days bloomed into sunny blue skies. There is a buzz on the canal and a steady flow, not a glut, of Narrowboats. Mooring spaces are easily found and often a synchronicity in Lock movement occurs. We sometimes see fellow Mercia Mariners, it is easier if they have a dog as we tend to recognize each other. I say once a Mummy Bitch, always a Mummy Bitch!
Alrewas (a corruption of the words Alder Wash) is one of our favourite destinations and takes us about 6 hours and we work 6 locks. It was a cold July day, leaving Mercia, but the Lock gets the blood flowing. Land lubbers ask us if we get cold on AM. No, we don’t. If we get cold we turn on the heating, but we have not been cold enough to do that this month or last month. We are both in receipt of a bothering ‘summer cold’. Chris picked it up from one of his concessionary travel outings, probably, and I caught it off him. But it hasn’t stopped us actively cruising. Alrewas was busy but we found our mooring close to the ‘winding’ hole. A ‘vitamin C’ ale at the Local and a good night’s cough and sleep set us in shape for the 5 locks to Fradley Junction.

Before the 5th Lock we needed to moor to fill up with water, empty the unmentionables at the Elsan disposal, and dispose of the rubbish. The Tupperware boat, that had been 2 Locks ahead of us, was moored inconsiderately in front of the water tap making no effort to not even do nuffin’! The person left on board greeted us “All rooit”. I responded “Not really”. We managed to squeeze in front of him and then had to pull AM even closer to the 'Plastic' as our hose length is finite. I had to sit holding the hose in position to the water tank as any water movement moved the hose end into the brink. I reported the Tupperware to the C&RT office. Fine to moor but don’t stay in front of the much used water point. 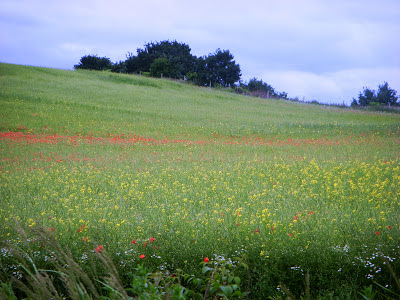 Water tank filled to the brim we worked the next Lock and turned sharp ‘Port’ on to the (aka at this point). We were met by a and the memory of the meant total preparation for whatever resistance we were up against – windlass, BW key, and bum power. None of the aforementioned was needed- easy roll on the swing and we entered the lovely Canal. Picturesque in part but a few random boats that are either unregistered or moored in a permanent looking way take away some of the beauty.

The weather became summer on Day 4 and the canal reflected in its tea coloured waters. We are learning to relax rather than race and Della is settling into the laid back lifestyle. We decided the 11 Locks at Atherstone were not to be on our list this journey. We had 2 at Fazeley repeated on our return. Back down the Fradleys and to Alrewas for a couple of nights.


Willington calls and all is set for DolcieBlue day on Friday.

Posted by The Blondinis afloat at 13:37