DolcieBlue has carried us under the M25 and we are in Watford on the outskirts of London-inium! It is taking us shorter than forever to get to where we are and we remain in no rush. Our lifestyle has been likened to living on the World's longest Village. I think that is an apt description. 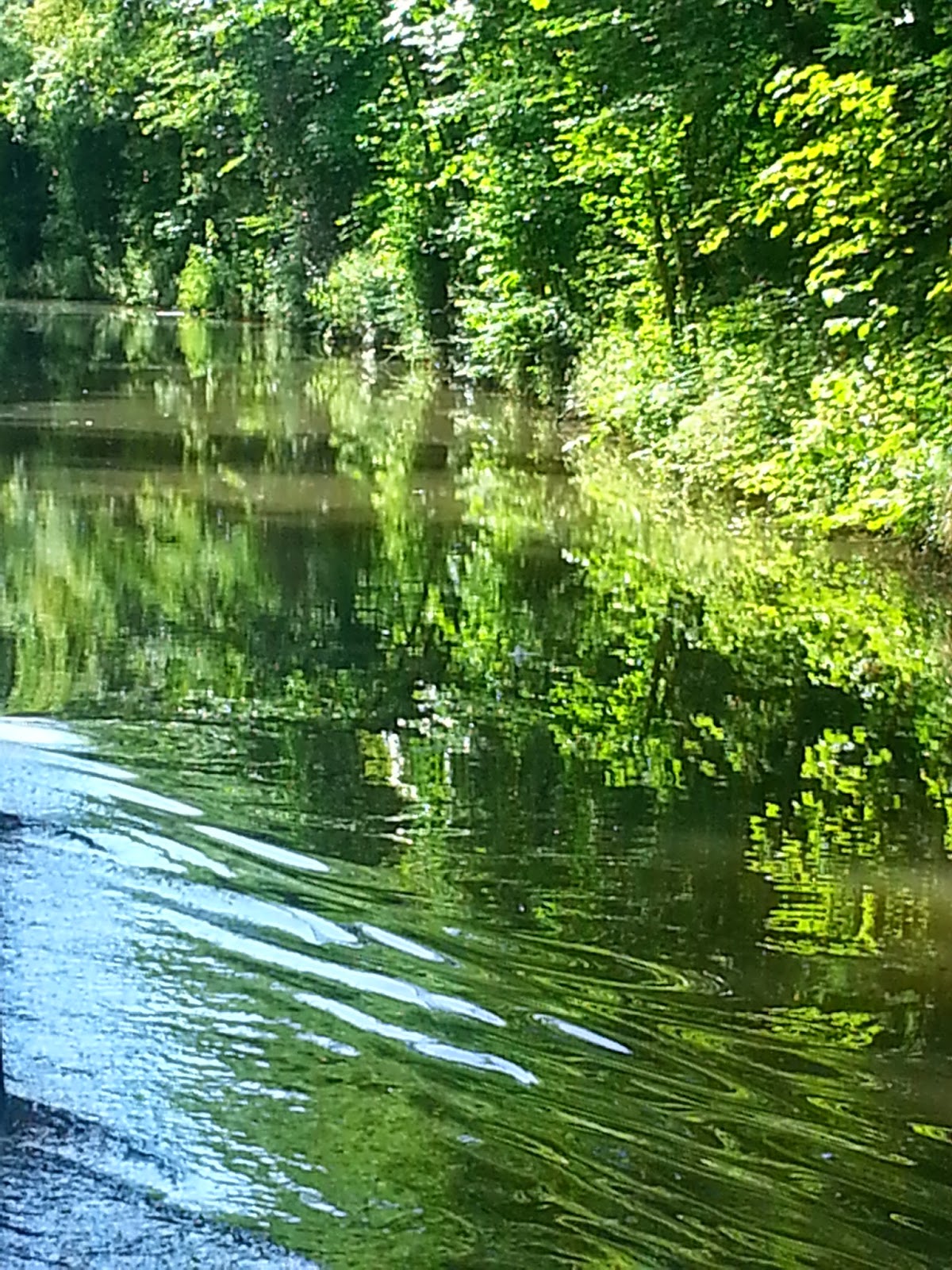 The Grand Union Canal is a scenic joy of nature’s reflections in tea coloured water. Every time we go around the, literal, bend we get a new moving picture. There is still little boat traffic on the move. It is rare to see a wide beam moving. How can they see over their roof gardens? I observed a Narrowboat reversing along the Cut, yesterday, with a jungle on its roof. The man holding the tiller said it was the only way he could move the boat along the Canal. 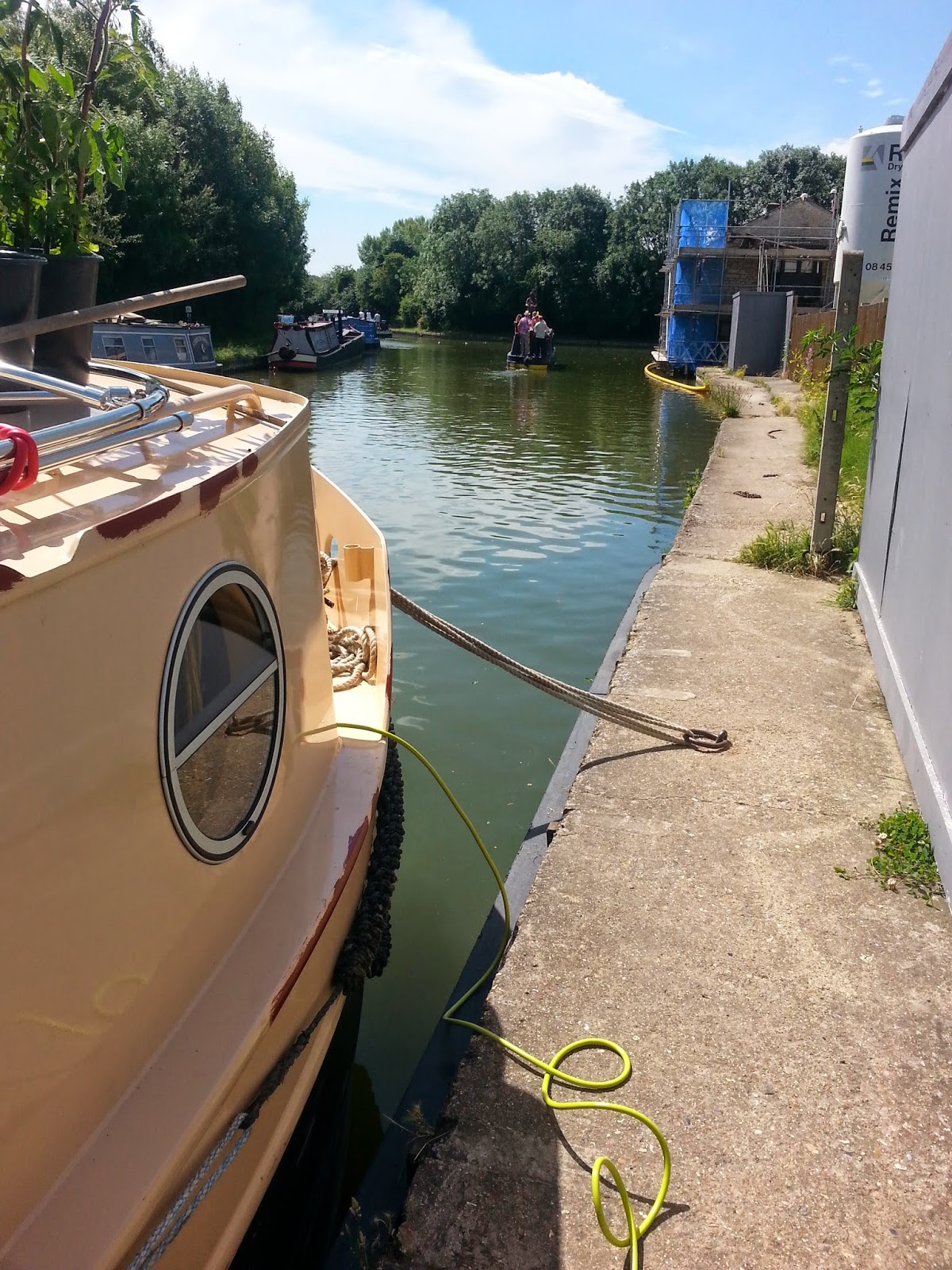 We made an attempt to go along the Aylesbury Arm, near Marsworth, off the Grand Union Canal, and went as far as the bottom of the Staircase Locks at the start of the ‘Arm’. DB was in motion going under the bridge directly leaving the bottom lock and she got bit! We made a snap decision to reverse back into the Lock and go backwards up the two Locks that form the staircase. It did not make sense to go further and risk the fury of more bridges. We were grateful for the help given by a couple of boaters who had waited patiently for us, earlier, at the water point before the Aylesbury Arm. They were held up while we filled our water tank and, now, they were waiting to get down the Locks. It was great to have extra hands helping control the Lock mechanisms and we were all big smiley faces as DB reversed out of the lock to pass our ‘friends’ moored boat without ‘kissing’.

Back on track along the Grand Union and ventured into a series of 9 Locks that were close to reservoirs and the wind was blowing strong. No problems and the top lock brought us to the junction of the Wendover Arm of the Grand Union Canal. There were no boats on the move so no help with setting the Locks. A young family took interest in DB ‘doing’ the Locks and father and daughter went for a cruise on DB up a couple of Locks with Chris and Della.

We met with C&RT Volunteers at the top Lock and they were confident DB would cruise the Wendover Arm. We did a sharp turn starboard, thank goodness for Bowthrusters, and cruised the long mile of the narrow shallow Arm. Our mooring was at the Arm's end and we had views across the yellow-green fields to the Chilterns. Tring is the nearest town and a good walk to get to the shops. The ‘Arm’ was not busy and moorings were plentiful at the end of the navigation. 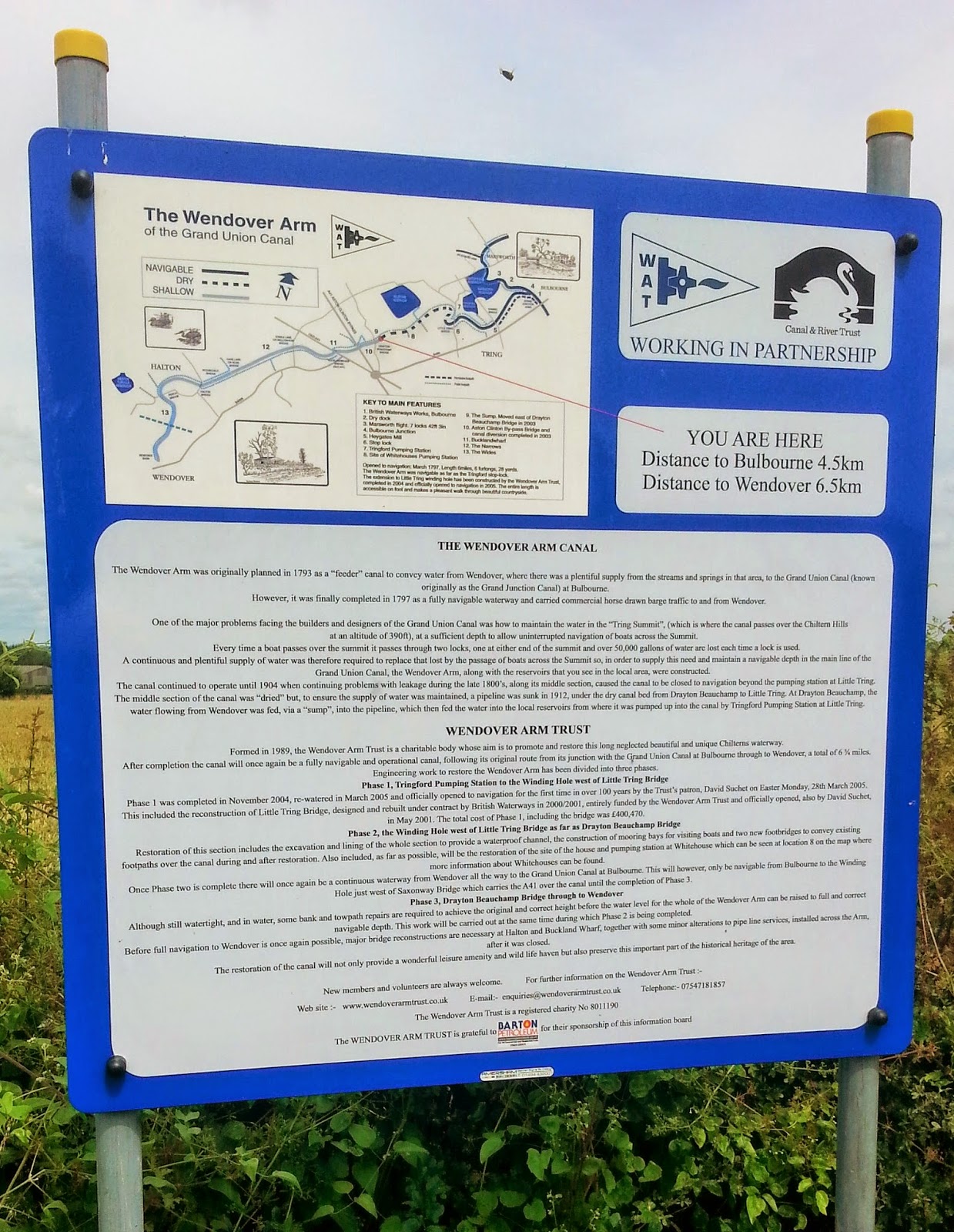 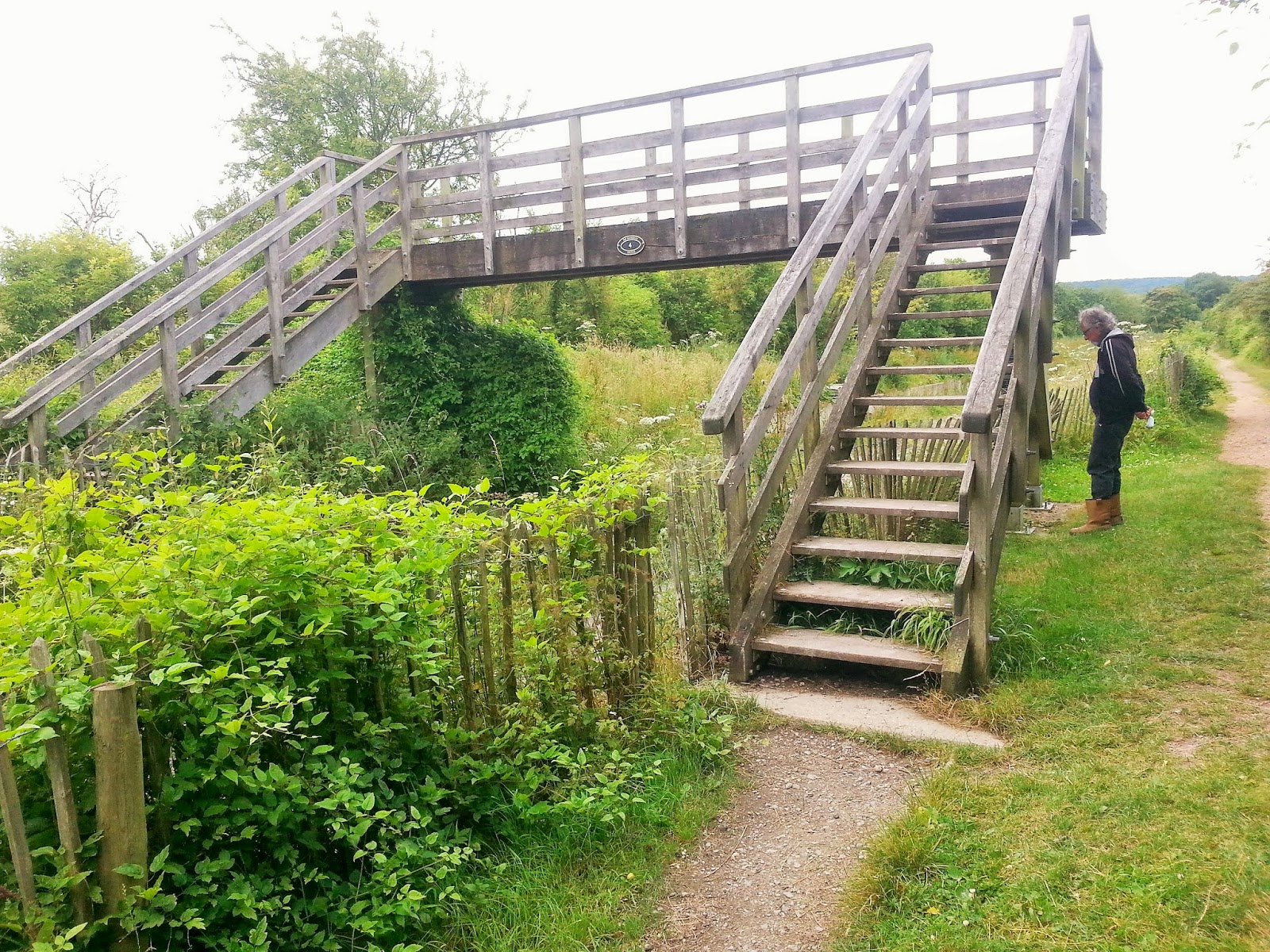 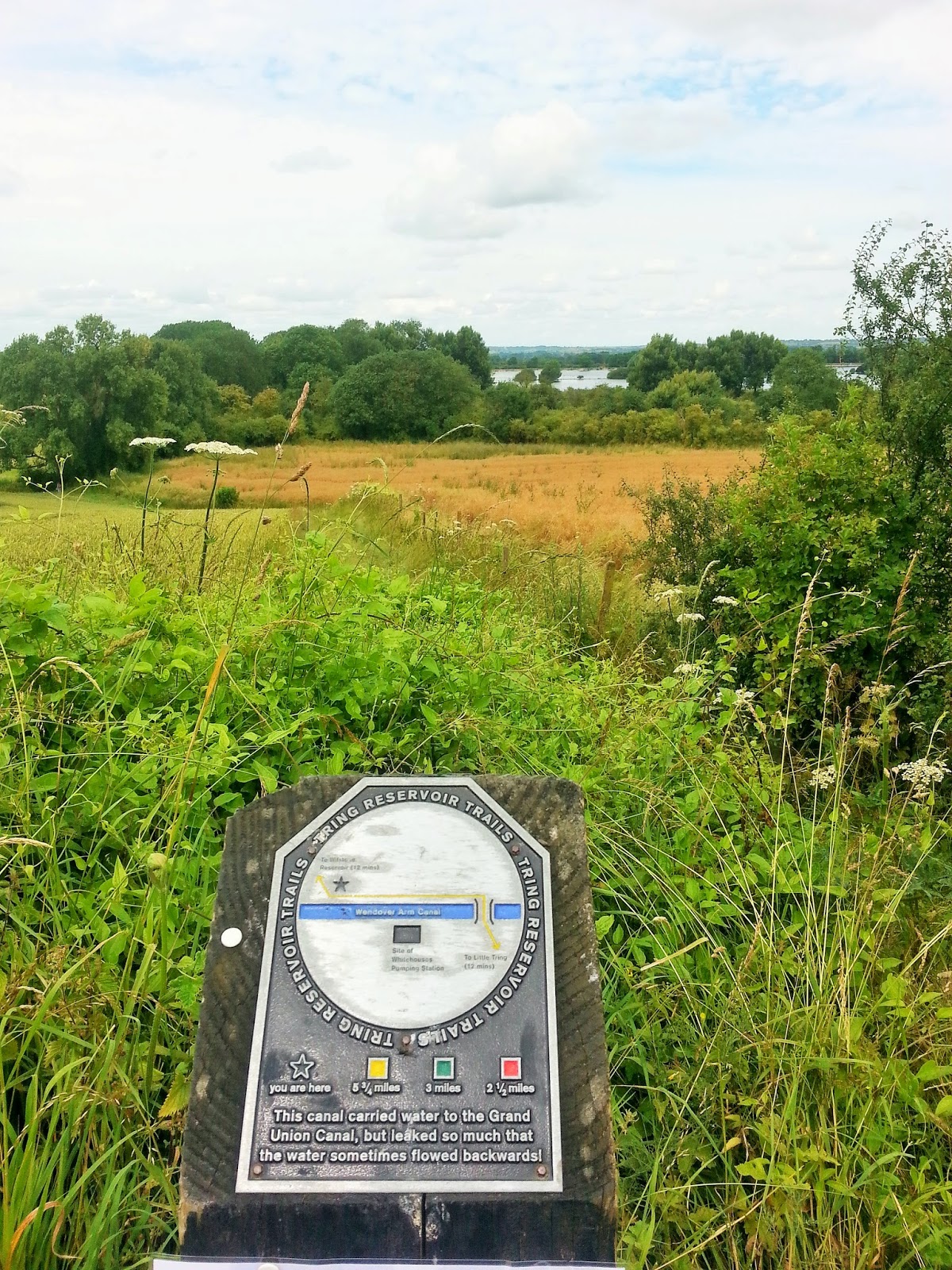 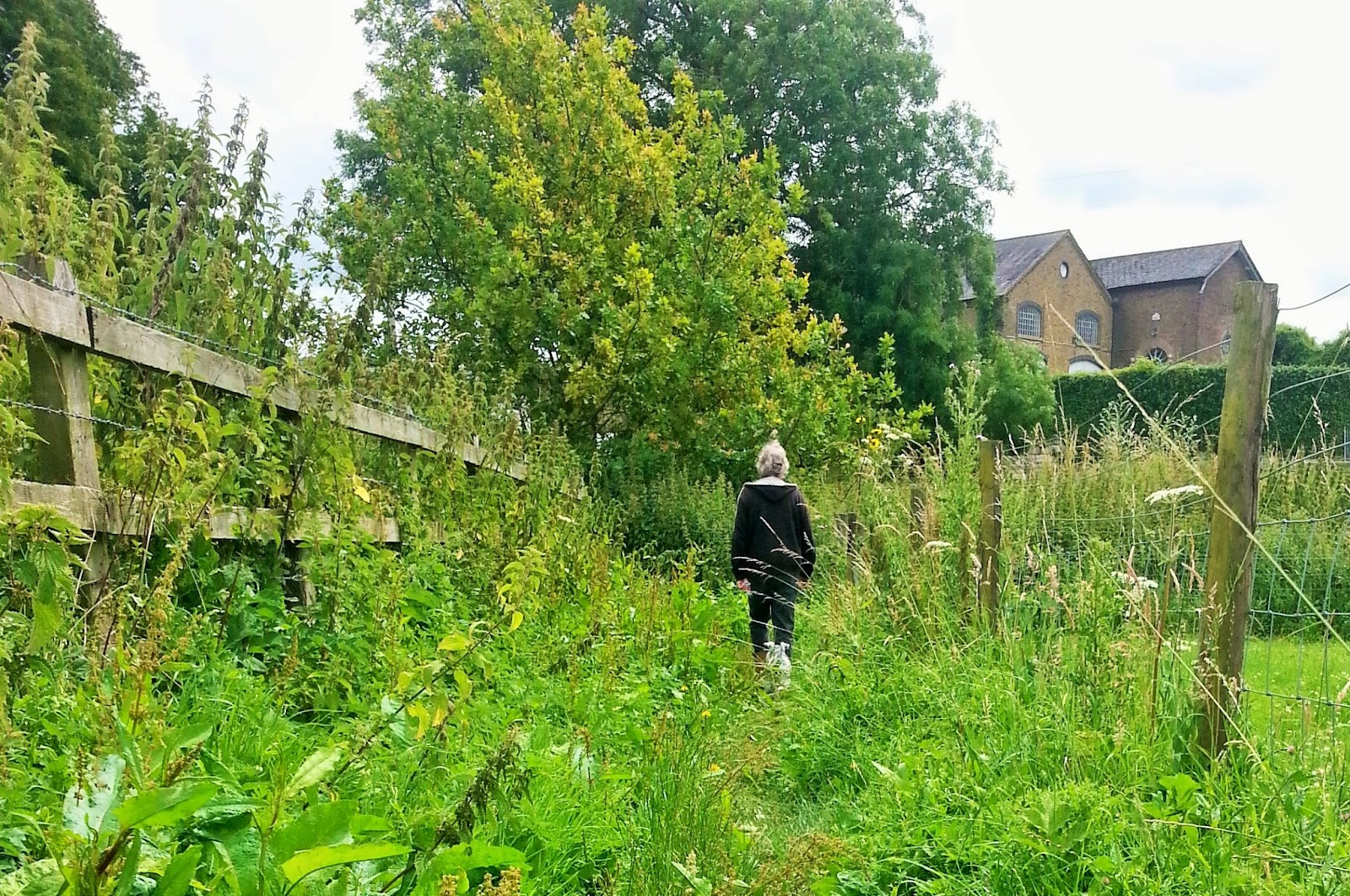 The Canal is slowly being restored with the gift of donations and works carried out by volunteers. It was well worth walking the existing towpath to get good views of the grey muddy Canal  edged with a variety of grasses, weeds and pink flowers. In 10 years time this mile stretch of Canal is planned to be navigable but Wendover, at the end of the Arm, will have to wait. 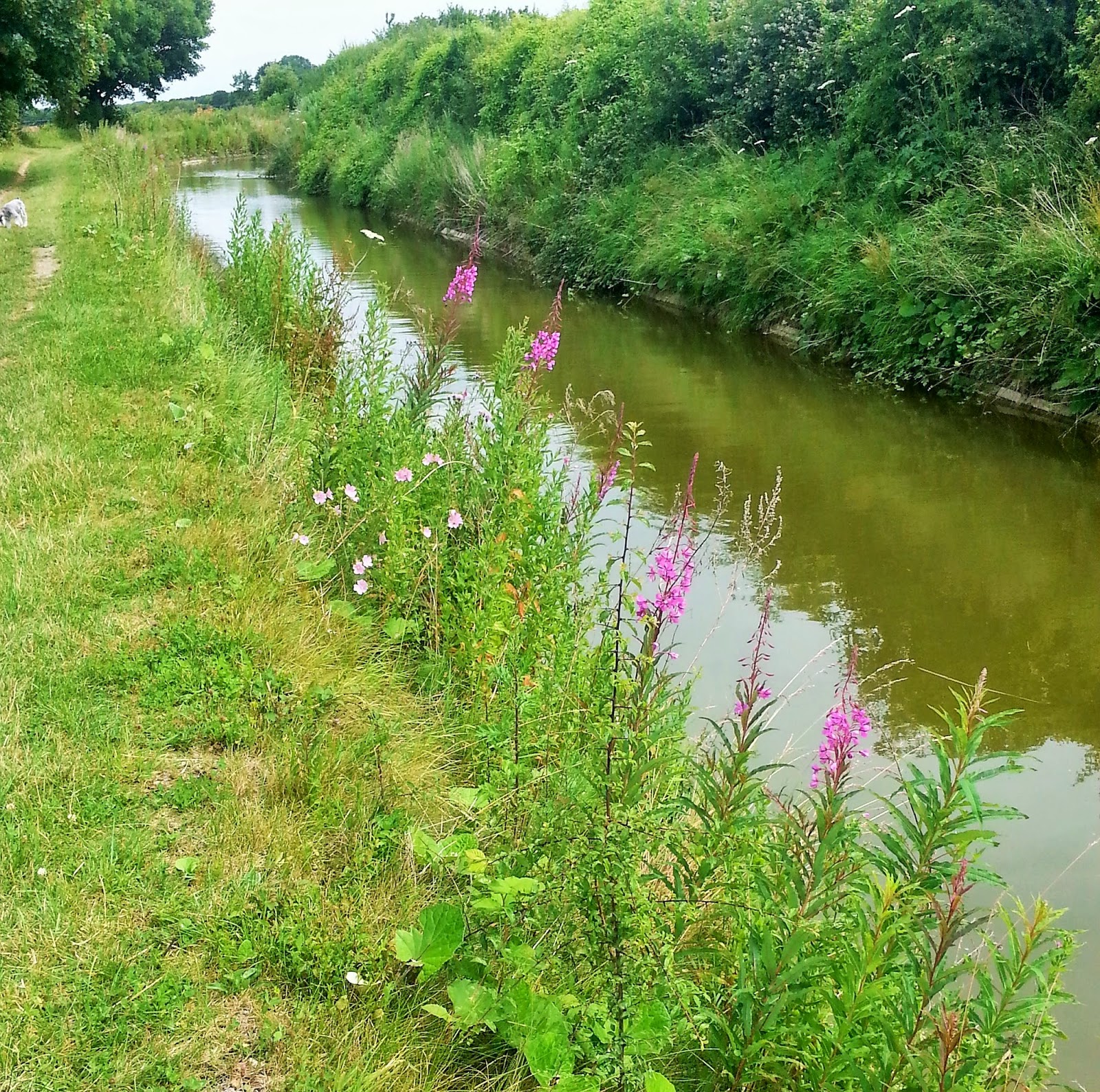 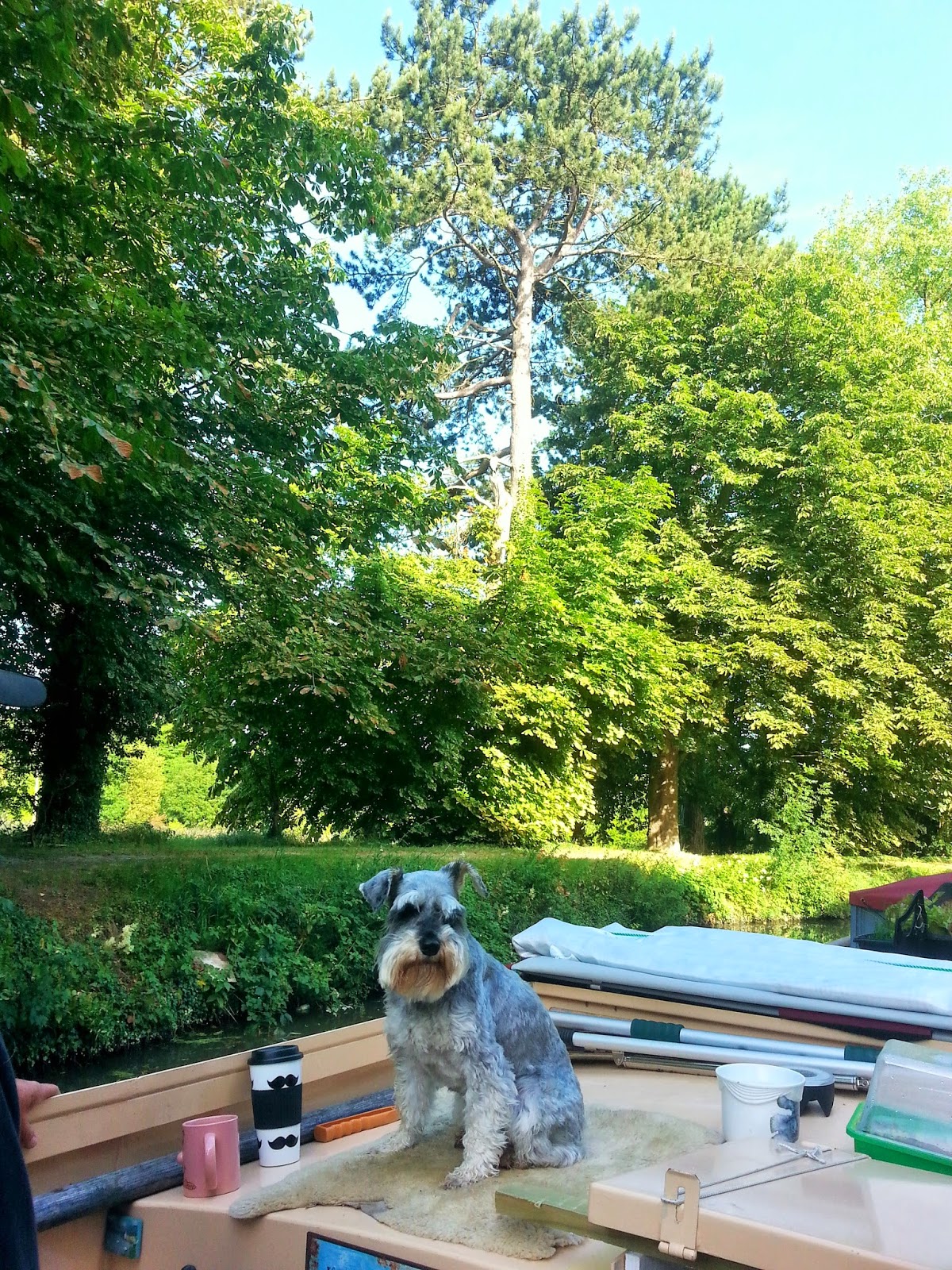 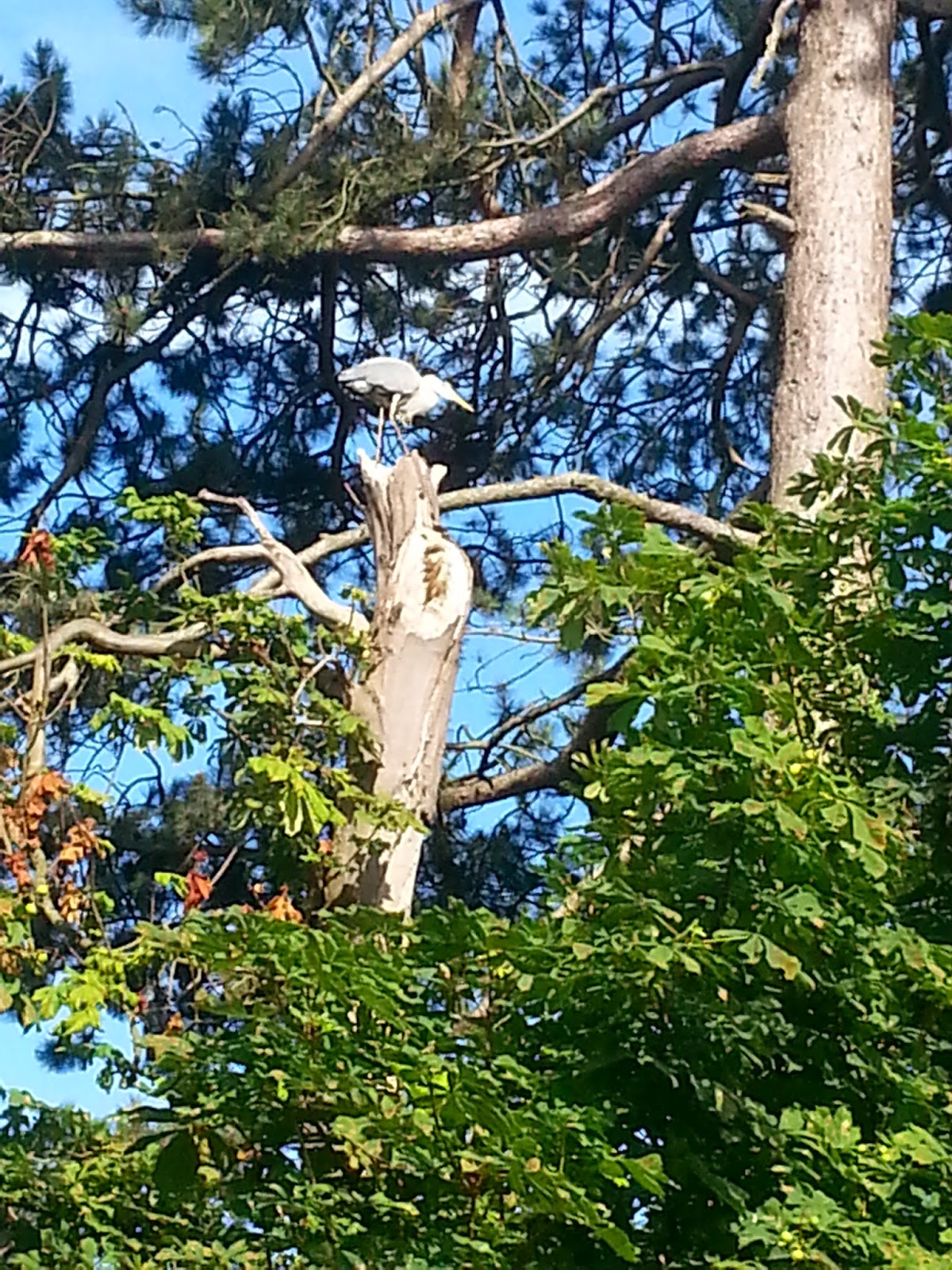 Back on the Grand Union we moored up for breakfast at the Water Point so we could ensure our tank was completely full. (that was 2 weeks ago!)
Berko (Berkhamsted) was another unexpected stop for us. We had intended to get a few groceries and head closer to London. We moored park-side so Della could have a run and I could get essentials at the supermarket. All done and we untied the ropes only to find DB grounded, stern end. It took us 20 minutes to get floating and moving in the direction of the next Lock. We were both tired but didn’t want to moor so close to the busy railway line and we anticipated we would need to travel another hour or two. At the next Lock we were greeted by some young Spanish people on holiday to learn English. I speak a little Spanish and a lot more Portuguese. One of the students was from Portugal and we had a short conversation. Another boat arrived at the Lock as I was closing the gates, so I had to open one gate to let it in. The gongoozlers opened the other gate! I'm positive they have a clear understanding, now, of  Close the Gate! After the boats moved out I had to ensure the gates were shut and I needed to walk the top gates to get to the towpath side to shut the remaining bottom gate. The top gates, now, had the gongoozlers sitting on them for a photo shoot. I told them to get off the gates. I wasn’t going to wait for them.

Boarding DB, Chris said the other boat was going to moor up if there was mooring before the next Lock. There was enough mooring room for us, as well, so we called it a day. What a lovely place and we stayed for a week. The noise from the nearby railway line was dulled by the houses neighbouring it and we soon felt at home with the local land-based people who were very friendly and welcoming. We really were reluctant to move on and we do plan to revisit one day. The Rising Sun Pub, canalside, at Lock 55 is to be commended. A popular Pub with a comfortable outdoor area beside the Lock. 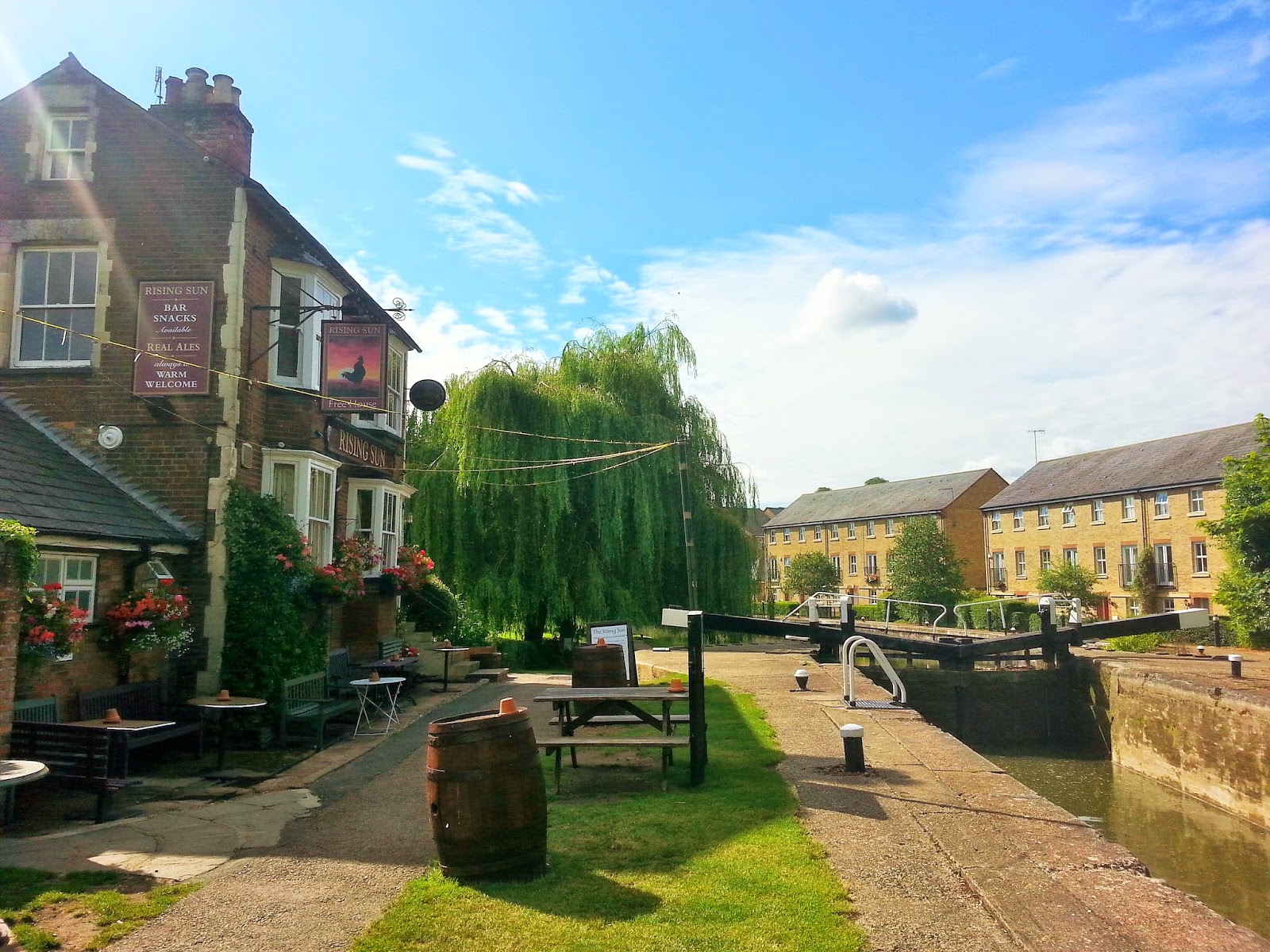 We met a number of passers-by who took an interest in DB and we showed some of them on board. As much as people enjoy seeing on board, our home, it does give us a thrill to hear their positive comments.
A planned day cruise visit with mates meant we left Berko, after a week’s stay, and worked the 11 locks to Hemel Hempstead. We stopped for a lovely pub lunch, on the way, at The Three Horseshoes, Winkwell. We decided to carry on and moor up for the night at Hemel. Quite a change from Berko but we need to touch another reality sometimes.

The next day and another 11 locks took us under the M25 Bridge to the Grove, close to Watford.

The Grove is a posh Hotel with a Golf Course and we were moored out of sight. Della and I walked through the grounds with Jackie from and her dog from another boat.

It was interesting but not busy. I didn't realise it was used as a holding ground for moneyed Footballers. No sign of stalking WAGs.

There are some nice moorings on the way to Cassiobury Park, Watford, but shallow waters make it difficult to moor and so we moored at Cassiobury Park, a few days ago, and have been enjoying Watford’s Jewel in the Crown, as well as the proximity of our friends, Steve and Prema. 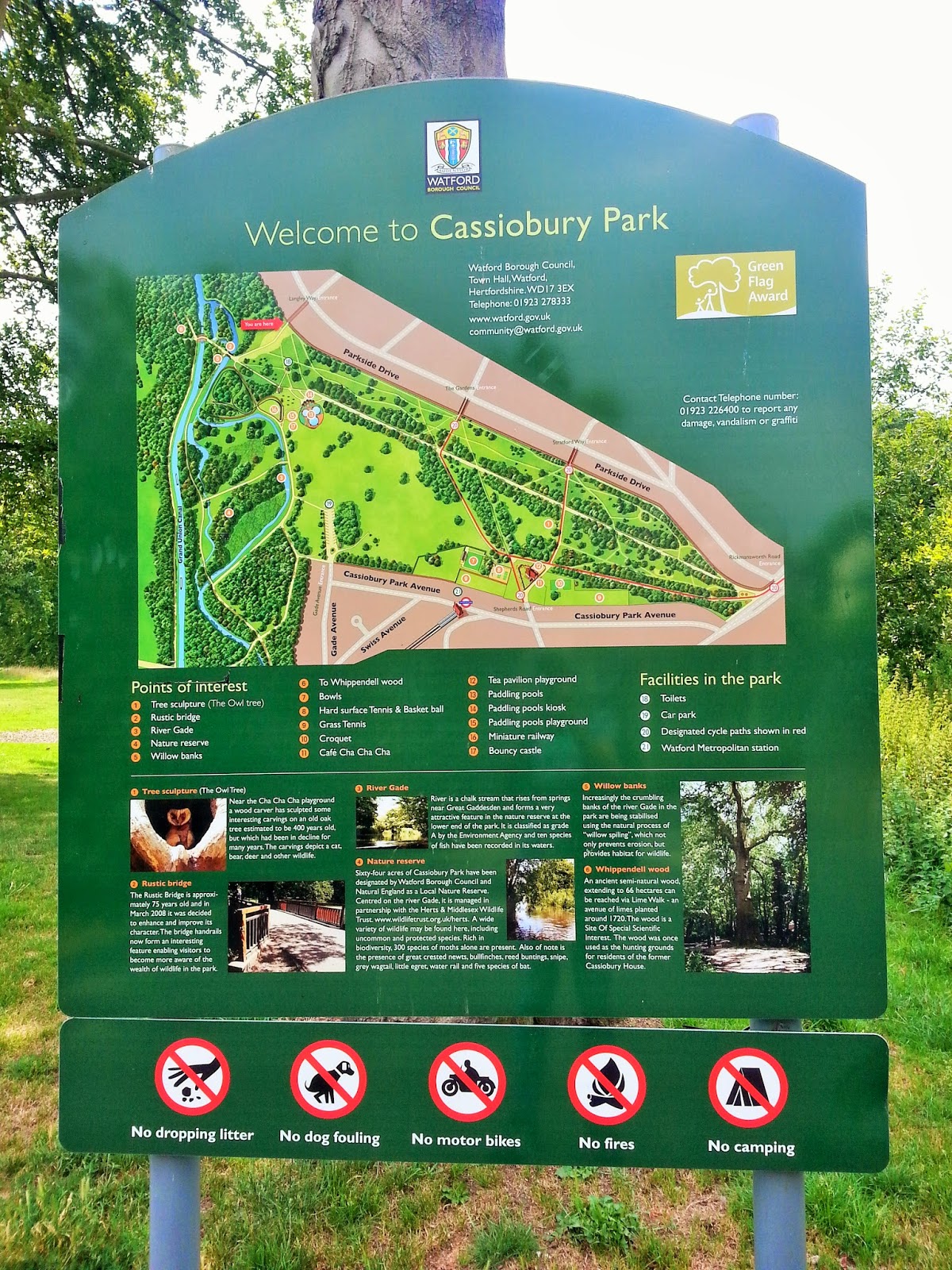 Cassiobury Park has wonderful walks through the park and is very user friendly. Again, we have met interesting people from our global world. 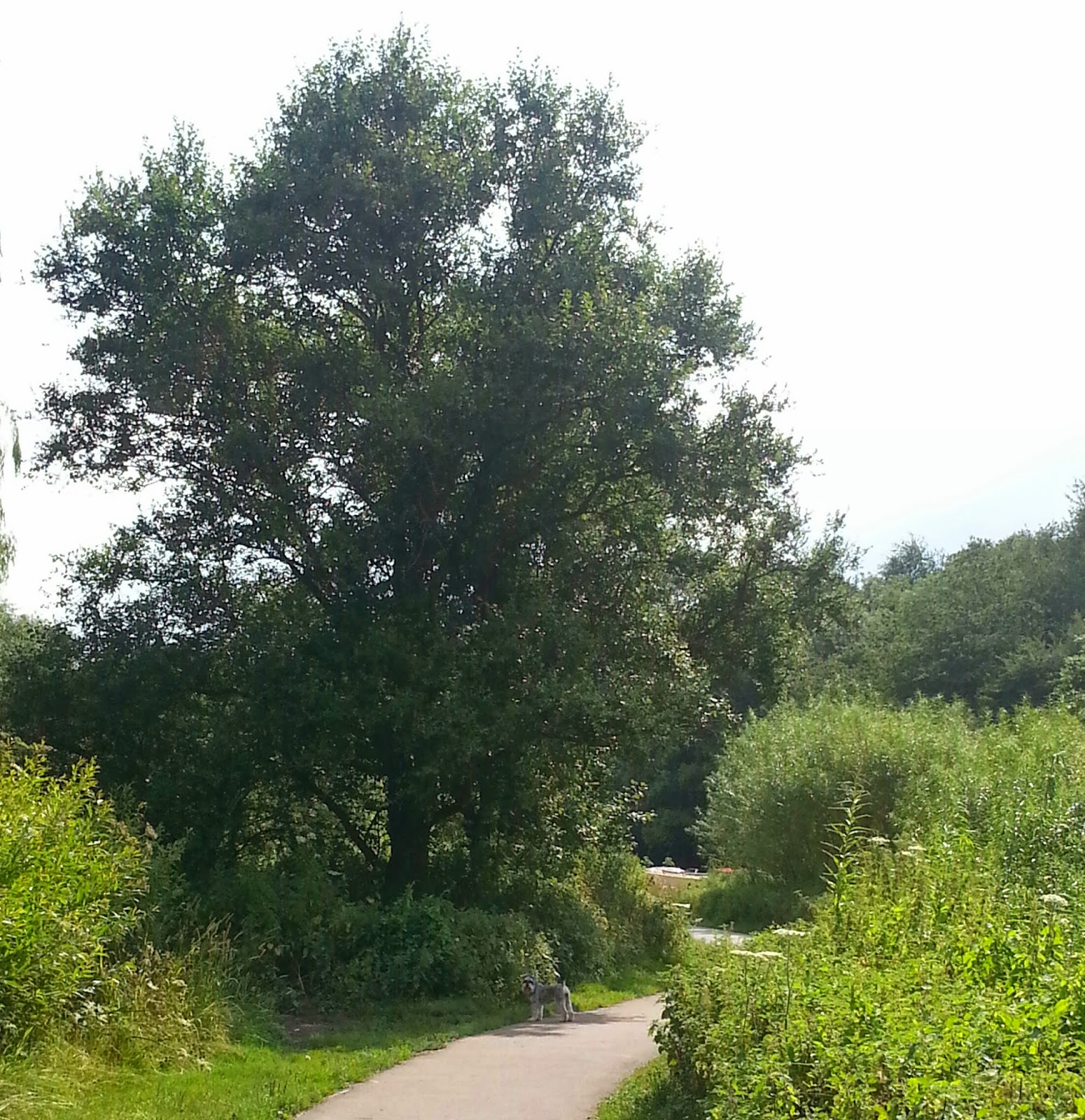 We will return and we hope to view the Bluebells in the adjoining Whippendell Woods next Spring. 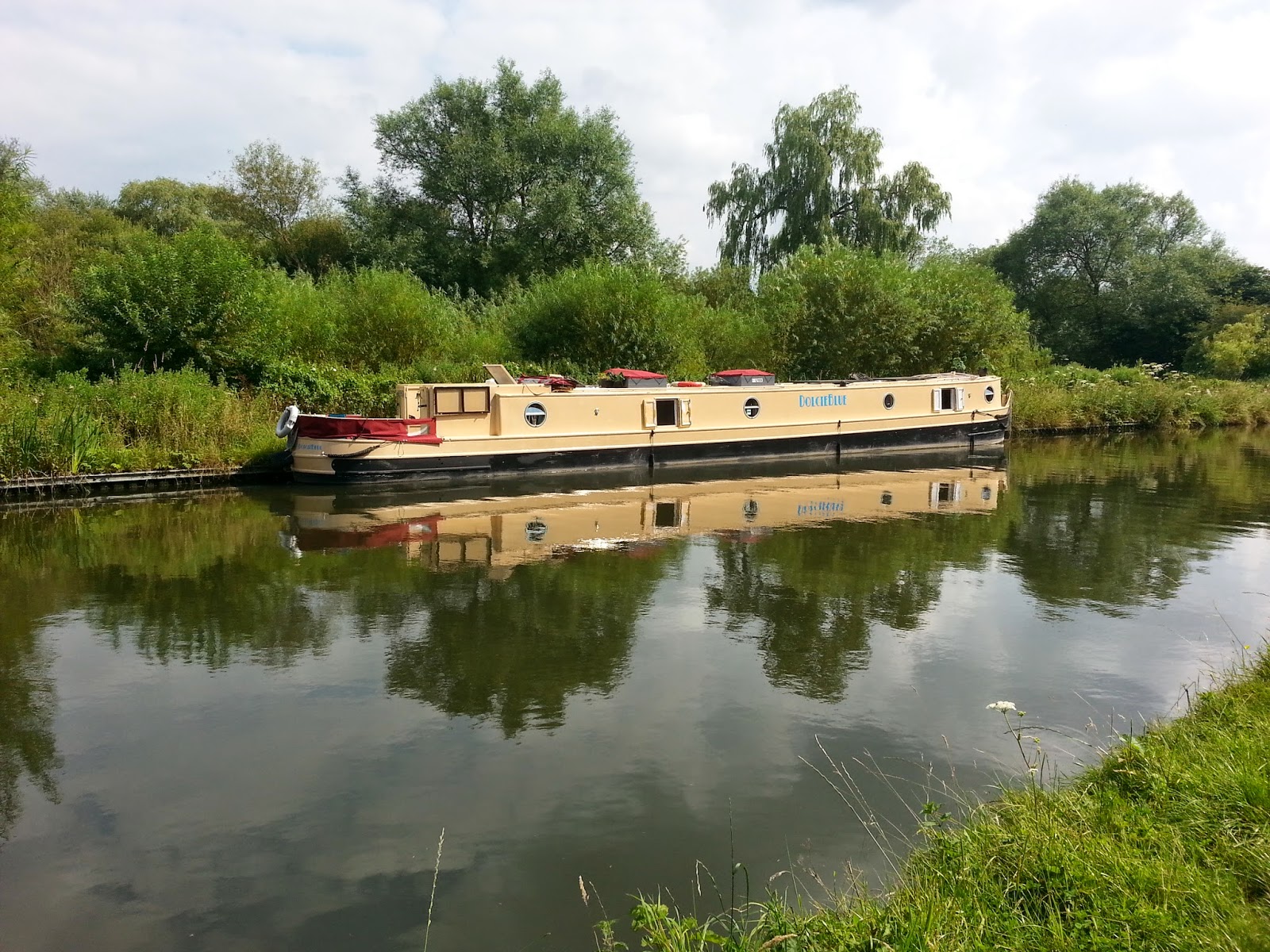 Posted by The Blondinis afloat at 10:26