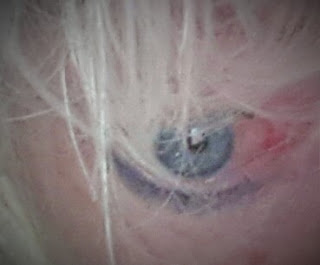 So I wasn't concentrating, I was tired and sitting on the new bench seat on the starboard side of the  stern deck under the warm sun as we cruised along the Grand Union Canal near Lower Shuckburgh in the direction of Braunston. I’d worked more than 10 Locks, earlier, and had a brief steer of DB while Chris ate his lunch. Now I was sitting down absorbed in a bit of Android Therapy on my phone and paying no attention to what was viewing on the Canal! In hindsight I would have been safe seated on the port side bench where my location would be mid Canal. This stretch of Canal was busy with boat traffic either on the move or moored up meaning that boats can be 3 abreast at times. I was confident with Chris’s skill on the wheel and had no reason to be watching our movement so I jumped out of my skin when 'THWACK' suddenly my open Right eye got punched out by a giant overhanging branch. “AAAARGHHH!!” It was a powerful and my phone flew down on the deck. I was in shock and feeling the pain. I took off to the bathroom guided by my Left eye and placed a wet flannel over my damaged eye. I didn’t want to check out my eye socket straight away! I was ranting and raving to myself, as no one else would hear, and I was so pissed off that I hadn’t been watching the overgrown foliage on the Canal bank and taken cover!

At the time of writing this I have put 2+2 together and can confidently add up what happened to DB's name on the stern! The 'UE' must have been damaged just after my eye took the beating. I removed the L but that's another Blog. 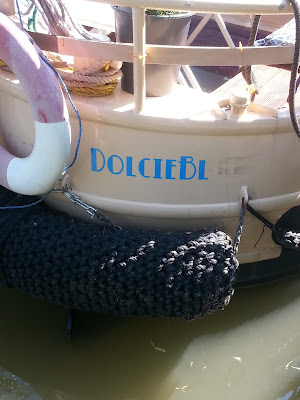 To find a ‘positive’ in this painful experience, I am lucky my eye wasn't plucked out and I am fortunate the injury is minor to the white aka sclera of my eye and has not interfered with my vision. I haven’t got a black eye so I can’t blame Chris for beating me up. He wouldn't do that anyway!
Yep my eye is a little sore but is healing. Now I need to write to C&RT and point out where the overgrowth on the Canal needs pruning. More importantly if I am going to relax outdoors as we cruise then always sit where no danger lurks!

On a happy note, later that day, we moored up in front of NB Waiouru. I had met up with Tom and Jan, last year, on the Oxford Canal near Braunston so it was pleasing to reacquaint with them. Given that there are a number of Narrowboats with Maori names, it is good to meet Kiwis that occupy them!

Posted by The Blondinis afloat at 08:19