Once we got moving down the Shroppie we got moving. The Wheel house canopy has been tweaked and with a new metal beam and a replaced metal beam, both with a noticeable tangential curve that will eliminate the ‘ponding’ that was caused by the central straight metal beam. It was a design fault but the result is well worth the time and effort we put in to getting it sorted out.

With the continued never-ending inclement weather we are putting the Wheel house frame and canopy up each time we moor (less than 15mins work) and the stern canopy goes up (another 15mins work) if we plan to stay for more than one night! If the weather looked like a long settled period, once referred to as Summer, then we’d not bother with canopysing (I invented that word!) the stern end of DB.

Our plan is to cruise South and get away from the watery skies that are beginning to drown my attempts to ‘chillax’. We left Nantwich under fair-weather and remembered the moorings near the secret nuclear bunker and where we had seen a couple of hot air balloons flying above us when we were on AM in 2011. I had forgotten it was also in the vicinity of the clay pigeon shooting range but was reminded when I started to hear some vibrating bangs not long after mooring. Della tuned into the noise quickly and started to look agitated with mild shaking. The solution was to untie the ropes and cruise away from this noise as we didn’t want to upset Della.

We found a nice mooring site near Overwater Marina and not far to the Audlem Flight of locks. The Marina was not in our view just beautiful countryside and we thought we could stay here for a couple of nights. The only sight that annoyed me was a boat cooker that had been fly-tipped on the side of the towpath. Lazy so and so’s. I have been thinking about people’s attitude to rubbish. This includes the small stuff, as well. I remember in the early 70’s there was a ‘Be a Tidy Kiwi’ campaign that affected me in my school years. To this day I still remember it and the feeling of pride I had at being a tidy Kiwi. I still keep putting rubbish where rubbish should go!

When it came time to move on, we planned an early start on the run of 15 Locks. And we were the first on the move from the bottom of the flight. Another boat turned up, behind us, just as we were on the rise in the first Lock. Fab, it was holiday makers from Sth Africa who were in a hurry to get up the Locks and their ‘Lead’ Lockie helped us, as well. We started to meet other boats, eventually, coming down the flight and synchronicity came into play. All good. 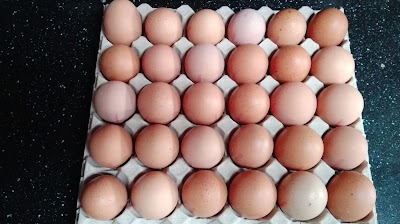 After the Audlem Flight, we stopped for breakfast and I walked back to the Farm Shop at the Top Lock. I couldn’t turn down a tray of 2 ½ dozen farm eggs for £5. It amazes me how the hens can put a printed red number on a clean egg shell. Country farming has come a long way.

The Adderley 5 Locks were next. The traffic was mostly one way and there was some waiting involved. I gave some help at the first Lock to the solo boater, in front. He wasn’t exactly happy with my assistance; he didn’t think it was necessary to move out of the Lock until the boat waiting for the next Lock ahead had gone into the Lock. I think he was not in favour of women, saw them as bossy and he said the name of his boat read backwards as his ex-wife’s name. Whatever, I got behind the helm of DB and left Chris to Lock with ‘matey’.

We soon made it to Drayton (aka Market Drayton) and got a good 48 hour mooring, where we overstayed ever so slightly due to rain! Nice place and friendly boaters passing through.
Thanks to Ray & Linda on Miss Elouise for your friendship and help with the positioning adjustment to the stern fender and the addition of the button fender. It was bloke’s work and you and Chris both did a fine job.

I was sitting out undercover on the stern minding my own business when I heard a siren horn blast and “Sarah, Sarah, Sarah...” being called. I stuck my head out and saw ‘Arthur’ on the bow of Nb AVALON MIST!!!  It was a wonderful sight and we were both so pleased to see Chris and Kev and see how they had made her their home. I had forgotten the sound of AM’s horn, but I still think it is cool and unique on the canal.

Off again to the 5 Tyrly Locks. The Canal was busy, that day, probably because there was a bright light in the sky! We pulled out and were well underway when another boat decided to pull out in front of us. It was one of those things but, in my book, if the coast is not clear you wait. They obviously didn’t want to be in the back of the queue for the Locks.

These Tyrly Locks have a vicious side wash below the lower two Locks and we had discussed ways of dealing with this with NB MissElouise and the method to try with Tyrly was with the bottom gates open for access, at the same time wind up the top ground and gate paddles with the hope the side wash would diminish. And YES, our discussed surge management plan worked! As DB made a controlled entrance into the Lock, I wound the top paddles down.

At the top lock, the Nb that had pulled out in front of us, earlier on, waited until we had got out of the Lock and let us go first. We guessed they were going to let us lead them through the narrow Woodseaves Cutting and we would be able to let oncoming boat traffic know that they were following. Were they conniving or were we getting paranoid?  So we got to Woodseaves Cutting and just as we were going around a blind bend we saw the nose of an oncoming boat! Holidaymakers, they were considerate. They stopped and edged into the bushes and we got through with no steel kisses. It doesn’t have to be a contact sport. I gestured to the boat behind to stop and that was the last we saw of them.

We thought of stopping at Norbury Junction but there were few moorings and no Internet hot spot.

We called it a day when we got to Gnosall got set up for rain.

Posted by The Blondinis afloat at 08:04