We pulled the plug on Bath time as soon as Della’s Vet gave the all clear that normal duties could be resumed and she, Della, was fit to be on the move as long as we sent a sample of her pee in the fast post to be tested for ‘no blood present’! Great to have delightful Della returning to ‘normal’!!
DB was ready for departure and family friends of mine, who live near Bath, joined us for the cruise from Bath to Bradford-upon-Avon. It’s a long story but suffice to say I first met Harold 50 years ago when he was the visiting Trinity College of Music examiner doing the circuit in NZ. Time moves on but lovely to share our DolcieBlue with him and Helen.
The Canal between Bath and Bradford was busy, mostly with moored up boats. We did have more than a ‘steel kiss’ with an oversized wide-beam Hotel Boat. As to blame, it was a protruding obstruction on our starboard side that Cptn had not seen and I had been busy chit-chatting rather than being the helpful observant First-Mate. Cptn Matey, on the Hotel Boat, was not best pleased and accused DB Cptn of being drunk! I think if we had passed this way, recently, the narrowing caused by the obstruction would be memorable but this was the first time in 5 years! DB now sports 12 scratch marks, the length of her cabin side, but that will go with a wax and polish!
Without further ado DB cruised on to Bradford and almost fit the prime mooring before the Lock moorings. The short Nb behind us aptly named ‘Tight Squeeze’ could have pulled back and shared the ring behind it to make sure there was adequate space. Lacking consideration seems to be common mooring practise, on the canal. There are 3 choices....grin and bear it; request the boat ‘owner’ adjust the boat position to make more room; use initiative and care and move the boat yourself.
I took Della for a mega walk the following morning, at least 2 miles, and returned to DB as a Nb was going into the Lock. It made sense to share the Lock and get on with our cruise with our day’s destination being the bottom of the Caen Flight. The Bradford Lock was the first lock that I went ‘up’ on Nb Avalon Mist, 5 years ago! The days of inexperience when we held the ropes to prevent any loss of control of AM, as the rising waters looked menacing. So long ago on that learning curve! Now, the boat engine has become our friend and tool, as has commonsense with winding the paddles.

The K&A has more than a few locks, 104 to be precise and a fair few swing bridges that are mostly manually operated. The swing bridges we struck, not literally, that day were metal ‘mothers’ and the heat of the day was messing with their swing. Heave, grin and bear it worked on most and then there was one I couldn’t budge! A boatie showed me a knack that may work but I think we are past those bad bridges now!

Occasionally we came across some wide-beam or is it broad-beam boats, on the move. I think I would be on a river if I had that size of craft. The people, aboard, were empathetic and would give up their space in the queue at the Locks so 2 Narrowboats could move ahead of them through the Lock. One of the kids in a wide-beam let her windlass drop into the Canal. DB’s Cptn took his mega- magnet and spent some minutes trying to locate the windlass without success. Still we were rewarded in being able to cruise on ahead to the next Lock.

At Seend Cleeve we had another run of Locks. The pound near the pub was running dry and I tried to moor at the Lock mooring but kept being pulled to the Pub moorings opposite. I couldn’t see the Lock but guessed it was being emptied as the pound was filling with a cover of water. Chit chat with a thirsty person, while I waited.
I called out to a Mr Grumpy with a windlass, on the towpath side “Is the Lock ready?”
“Yes”
“Are you coming up as well?” I asked.
“No!”
“Thankyou, good moaning.” I said. (He wouldn’t have heard my pun!)

It took a fair bit of manoeuvring and a helpful push-off to get DB free and floating so I could throttle on to the Lock!

It wasn’t all Lock-n-Lol that day. We shared a Lock with a newbie and his partner who was reluctant to work the Lock and ended up staying on their boat. I must be scary but I do try to be helpful. The first Lock is the deepest?!!
Moving along with the day getting later I was steering and coming into view was a bridge on a blind bend, canal-vision! The boat ahead had disappeared and I gave a blast of DB’s horn. I think I had heard a horn and was kind of prepared for oncoming traffic. Suddenly the nose of a wide-beam boat appeared and I automatically throttled back. It reads like fast action takes place but remember boats do not move fast and once sighted cautionary action with steering and throttle takes place. Soon I was on the move and before long, DB was behind a ‘Holiday’ Boat getting grounded in the shallow muddy waters.

“Let us overtake” yelled Cptn. “Take our stern rope” as he threw it to them “ and we’ll tow you out of the mud.”

Thankfully, there were 2 people aboard! We shared the flight of 15 Locks plus another 6, spaced out but close together, Locks to Devizes. Helen, my family friend, was joining us to experience the feeling of ‘going up a Lock’ and she also gave us a big helping hand with a number of the Locks.

I collected mail I had had sent on to ‘Poste Restante’ at a Post Office near the top of the Flight and then continue Lock duties. 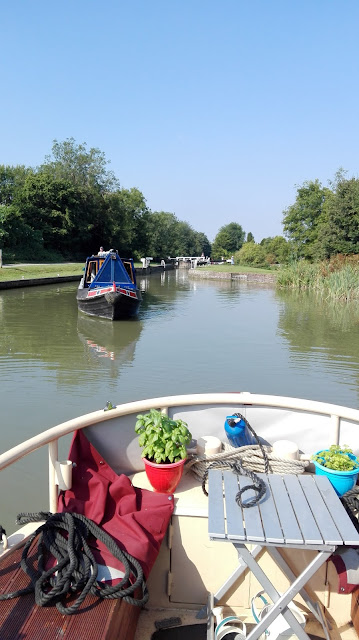 I stepped into a grass covered hole at Lock 47 and fell onto soft ground. I think I have flexible ankles as a pat of arnica cream seemed to give comfort to the affected area. I think it was quite a spectacular fall and holding the windlass away from me meant I didn’t try to save myself! I just rolled and walked away.
Yay, we made it to Devizes and Market Day and in time to have good moorings and be ready for our friends from California who were staying the night!

Posted by The Blondinis afloat at 08:00