We are loosely following the 4 Counties Ring so why not use the possibility of 4 weather forecasts to predict the conditions we may be cruising under. It’s all very well to hope that cruising will only take place, for us, under predicted fair-weather. The %-age risk of rain minimally varies but the time it may fall differs. Gone are the days, here, when the heart spoken words “What a glorious summer day” could last for the whole day let alone ½ a day. We are on the west-ish side of the Island and maybe that is part and parcel of the land/Oceanic climate here. But for the sake of sanity under the Jet Stream the polar front has stalled over the UK bringing wet and windy weather. Then the talk moves to Jet Streak... So much information, maybe it should just be called Jet Maelstrom. Anyway, instead of saying “What a beautiful day”, I am saying “What a warm sunny day at 9.30, this morning, and now, at 10.53 it's raining cats and dogs.” The weather may as well be timely in its description.

One morning, on the Caldon Canal I woke up, I wake up every morning, the day was dawning treating me with a clear blue sky and when I rose a ray of sun shine beamed through a crystal hanging in the port hole window. Happy vibes! I dressed, early, to take Della for her morning walk. Della is a creature of habit and knows that when she has done her business it will be her same-as- always doggy breakfast, James Well Beloved biscuits soaked in water with a taste of added Pilchards. So we get off DB and I look into her black dog eyes to tune into which direction to take the walk – I look and point saying “That way, or the other way?” Decisively I command “That way.” I want to take a photo of nasty Bridge 42 while we are moored at Cheddleton.

The arch of the Bridge is low over the Canal and has bitten other boats and it grabbed the starboard side of DB's front wooden wheelhouse panel. Honestly truthfully I wasn’t going fast and I had throttled back in reverse to slow almost to a stop to avoid contact. I turned on the bow-thruster, bzzt bzzt sounded as I buzzed to Port too late and the panel got grabbed but not swallowed. It looked and sounded worse at the time it happened. I am not happy about being involved in damage.

Beyond the weather has been the journey along the Caldon Canal. We went on this Canal as far as Cheddleton in 2011 on Nb Avalon Mist. I remember it was and still is a narrow Canal and there were some windy days. I had my first attempt at ‘winding’ (turning the boat around) at Cheddleton, we didn’t venture to Bridge 42!

After ‘winding’ AM I had jumped onto the towpath holding her stern rope and one of my feet went straight into a one-foot deep muddy hole. That must hold some humour! I wasn’t happy but no bones were broken, I remember it well. BW (British Waterways) were quick to the scene with orange high-vis to mark the point of danger!

I like the Caldon Canal, it is a quiet Canal with little boat traffic. Once we had moved out of the Potteries area and the Stoke-on-Trent ‘burbs we went past Hanley Park, nice but I wouldn’t moor there, and out into beautiful rural land. We moored further on, past Milton, and chatted with happy people walking the clean asphalted Towpath and picking the ripening blackberries.

“You wouldn’t think there was this beauty so close to Stoke.” said a happy pedestrian.
I think  ‘Keep that a secret from the Southerners.’

We turned onto the Leek Branch of the Caldon Canal to make the short 2-mile cruise to the end of the Leek line. It was well worth it, the countryside is gorgeous green forested and lush. There was wood on the towpath from a fallen oak tree. Tempting but the canal was too shallow to get alongside the towpath and the lengths of tree were too heavy to ‘person-handle’.

Further along is the 130 yd Leek Tunnel. 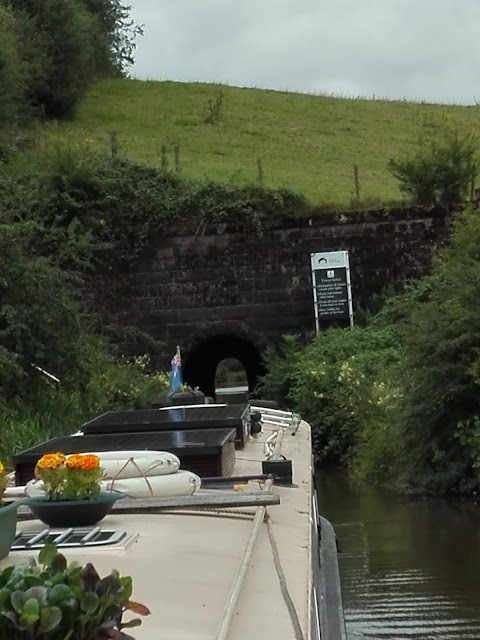 No difficulty for us to go through this tunnel, and it was the cleanest tunnel we have seen in our experience of passing through Tunnels on the waterways. There are a few moorings at the end of the Leek Branch but the moored boats were not close together and we struggled to moor. We tied up and met land friends who had driven to Leek to meet up with us outside Morrisons! Their journey was 25 miles, by car, and took just over an hour. When I phoned them to say we were close to Leek, our journey was about 1 1/2 miles, by boat and 1/2 mile on foot and took us about 1 1/2 hours. It is an IQ challenge to work out distance and timing as a water gypsy! 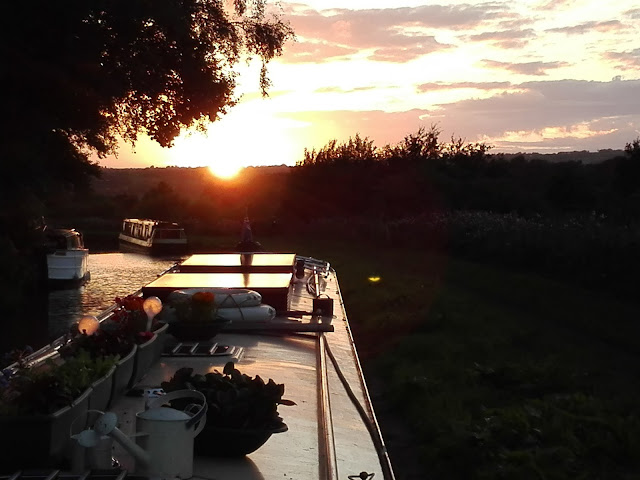 Later, we cruised back to be near to the Caldon Canal for an early start, the next day when we cruised as far as we could along the Canal past Cheddleton and onto the River Churnet. It was like being in the Botanical Gardens on the R. Churnet.

Beautiful and a couple of floating tree trunks purposely blocked the weir meaning a sharp turn to Port put us back on the Canal cruising a narrow stretch past the Consall Railway Station.

We had to wind at Flint Mill Lock as DB is too wide at her cabin top for the Froghall Tunnel. Nevermind, next time I will walk the towpath!

The Caldon Canal is worth the cruise from the beginning of the Canal at Etruria off the Trent and Mersey Canal. There is history along the way and there is no need to cruise the distance at speed. Be wary of the bridges, they are low. Another small accident was the low chimney got taken out under another bridge arch. That was owner error and I should have made sure the flat chimney cap was in situ! It was time to replace it, anyway!

The days' end of our journey was a fast, we thought, 2-mile cruise from Etruria to the Harecastle Tunnel.

We thought being so close to the Tunnel we should measure up with the skilful advice of the Tunnel Keeper to see if DB would be able to make passage through it one day in the future. "YES" was the answer but we would be placed at the end of the queue so we would have no pressure to move at speed. It is a long tunnel, and there are low heights to be wary of. One day I will steer her through. Cptn has taken AM through 3 times and doesn't enjoy it. I think our lighting is better and I'm up for the job!

BUT NOT THIS YEAR!!!

We thought that we would be able to Wind at the tunnel. We tried but we are too long.

Reversed back to Westport Lake, the Bowthrusters battery was tired but Cptn did the job well. Next day it was only a couple of bridges and the battery had recharged and we were able to wind and head in the right direction along the Trent & Mersey Canal.

Posted by The Blondinis afloat at 03:35