OK so you’ve heard of ‘Tyre Kickers’ when selling a car. People look and dream about if they could become the owners, make the appropriate comments but mute money talk. 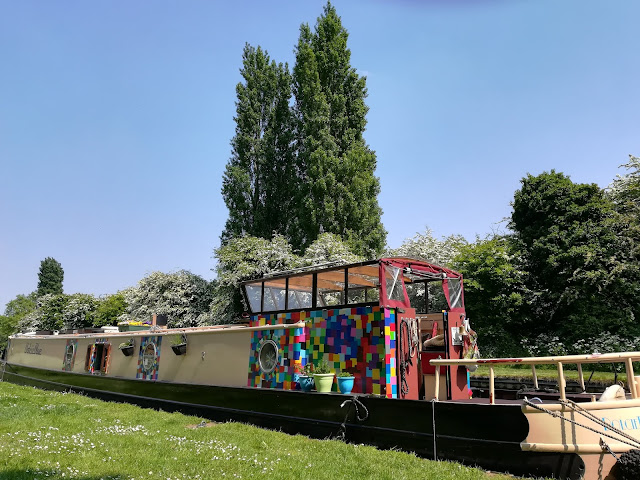 It is not a secret that we are putting our beautiful hunk of steel aka our home NB DOLCIEBLUE up for sale. Hence the name Steel Clappers, it could be Steel Cappers but no one wants to toe cap DB, they clap when they come aboard. It has been 7 years since we returned to England and began our dream life as water gypsies. Only it is not a dream, we took the first step and woke up to cruising the waterways.  Je ne regret rien.
Our life, together, has always been impulsive and we noticed we were drawn to the West Midlands and the village of Kinver on the Staffs&Worcs Canal has become a favourite place to moor. On a walk, in Kinver, earlier this year we saw a cottage for sale recognised it would suit us and meet our needs in our days of age and bought it. And so will begin another dream.
DB, beautiful DB, is waiting to become a living dream for somebody else. Check Apollo Duck https://narrowboats.apolloduck.co.uk/boat/colecraft-68-cruiser-stern/571259
We will put her into brokerage at a Marina soon. 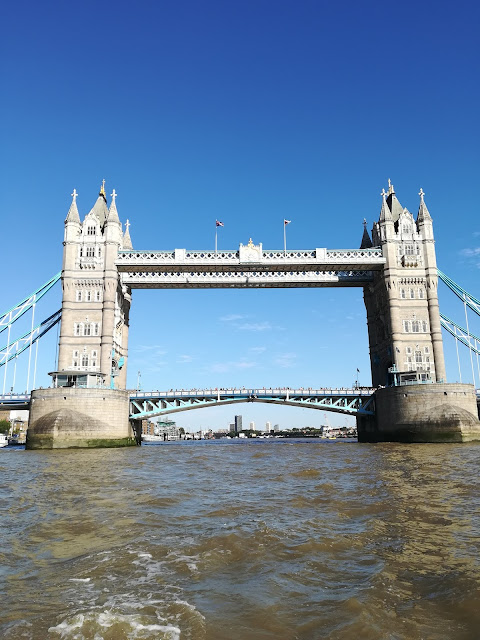 We have been cruising up the Thames. My last blog had us leaving Limehouse Thames Lock late afternoon on a sunny summer Sunday. Four years ago we did this cruise and left in the early morning, a sunny day and the water was just waking up. It was still a mill pond at that time. This time it was choppy and windy.

Della and I were indoors with both of us wearing our lifejackets. Cptn was at the helm in total control of DB and our friends, on board, appeared to be enjoying the ride and taking in the great waterside scenery that DB was passing. 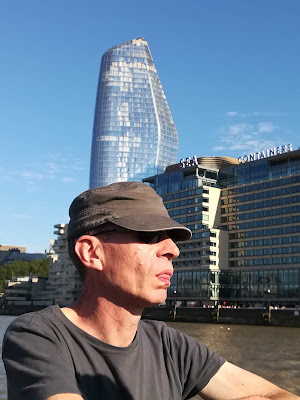 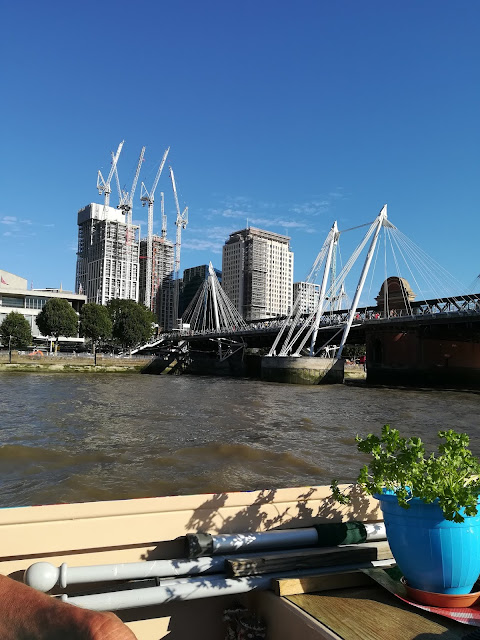 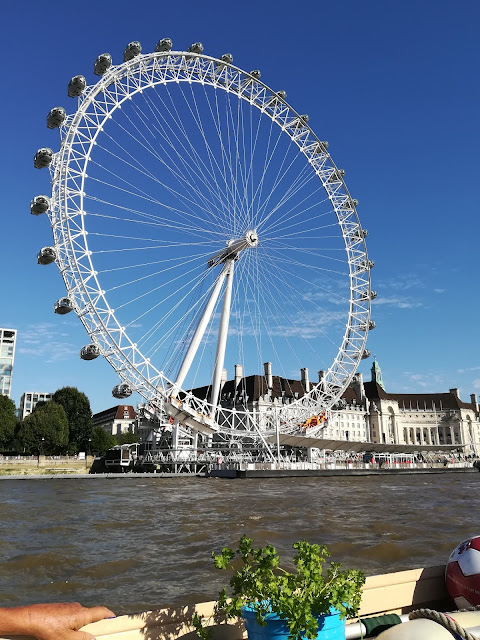 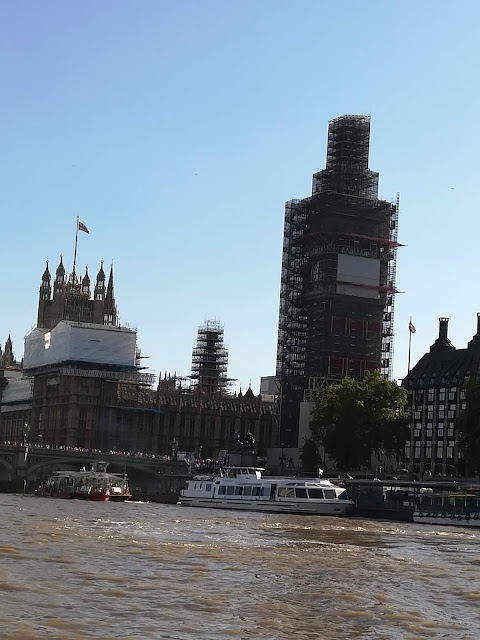 My confidence returned  as we approached The London Eye and I removed my lifejacket and started helming. DB rides the water well and Cptn was the right person for the job to get us underway. Everyone had a turn at helming under Cptn’s watchful eye. 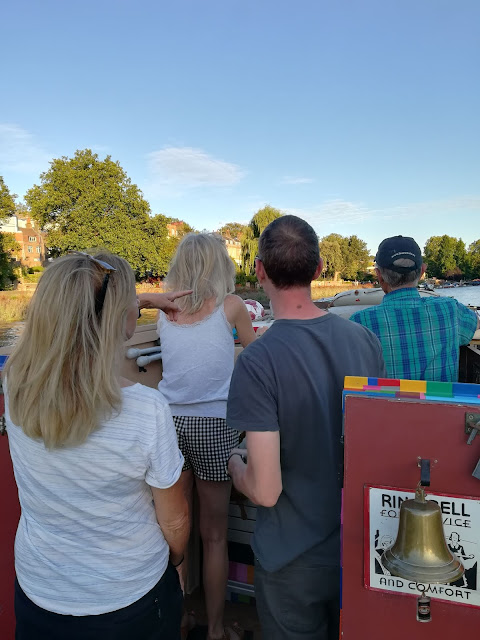 It took 3 hours to get to Teddington Lock and once we were through the Lock we moored up for the night. We had queried the need to book a mooring a few weeks back and were told there is never any problem getting a paid mooring there. So at the Lock I paid for a 2 week EA River license and a mooring for that night. The moorings were packed with ‘Gin Palaces’ and no room for us. Cptn phoned the Lockie who said reverse back and tie up near the Lock. The assigned mooring had a ‘Tupperware’ moored on it and we gave them their orders to untie their ropes and be gone. 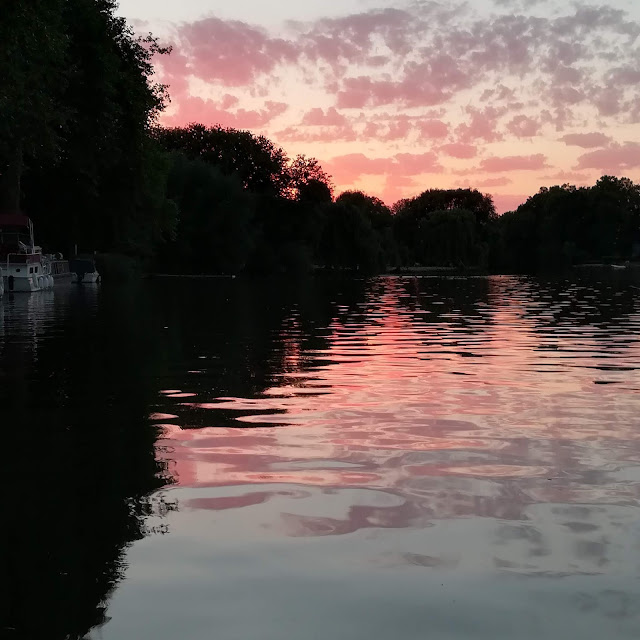 The R. Thames is always a great cruise and, I hear, a blast up a River in a steel boat is good for the engine. We didn’t hang about. Teddington to Runnymede, where we tried to smash up the polycarbonate plastic but it wouldn’t snap even with the weight of 2 jumping on its curly bend. We were about to get the hand saw involved when a man of the land approached and asked if he could buy the plastic. He had a use for it so we were happy for him to take it away no charge. He came back with some home grown tomatoes and a few cans of beer. Nice but not necessary.


Runnymede to Windsor, that was a short trip but we paid the mooring and stayed the night. The trip goes on....Wargrave Marsh, Sonning, Beale Park, Abingdon, then through Oxford past Port Meadow (Anglers to ‘port’ and they were not happy with DB’s position on the river, she was too close to them) and onwards to moor a river mile above King’s Lock. 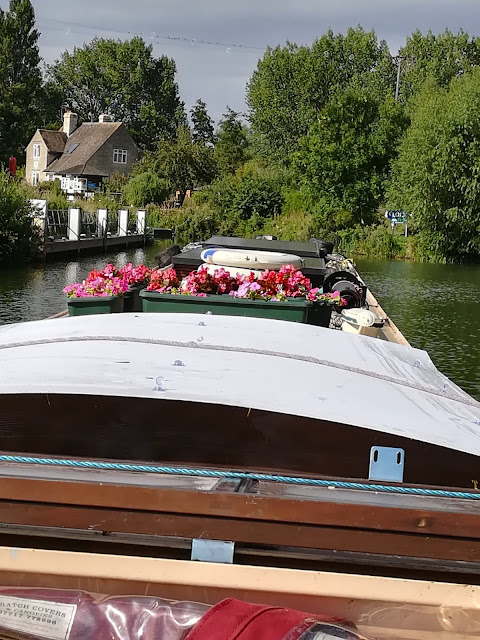 We are now in new territory on the R. Thames or Isis as it is known. Our intention is to go to Lechlade. The River was running ok in the dry summer but it is narrow and the banks are overgrown. Its level was low and at times we lost steerage which was a problem on the winding bits. Fortunately there was not much traffic. On one of the bends before Radcot Lock we lost steerage and while coping with this, a ‘Broadscruiser’ coming downstream appeared, at speed, as it came round the bend. There was no way we could give way to downstream traffic as they had come into our stream that we were trying to get out of. Kissing boats. We needed to move out of the way and they were stuck between DB and the riverbank not to mention the overhanging dead tree. DB slid out of the way nudging their rubber-strip. The woman-at-helm was very unhappy that we had made contact with their boat. “What are you doing?” she said “We’re fibreglass you’re steel!” Her words were wrapped with more of the colour of the moment. When I got to the Lock, I discussed the incident with the Lockie. He said he was impartial as he had not seen the incident. While I was at the Lock he had a phonecall from the ‘Broadscruiser’ and all he could do was give them our boat name and state he was impartial.

This incident put us off going to Lechlade, yes DB is a long boat on a winding river. I helmed most of the return to Godstow Lock. I made sure every blind bend we tooted at. 1 blast for starboard turn and 2 blasts for port turn. I got stuck with the green and red markers, I couldn’t remember which side to pass them on. I knew to keep the red marker on my right but I wasn’t expecting to see a green marker where there hadn’t been one the day before! I had to make a snap decision and I kept it to my Right. Wrong wrong wrong. There were 2 boats moored ahead and I had to make a sharp turn to port to avoid sticking DB’s bow into steel. She turned OK but there was not enough time or space to swing the stern out of the way so I did a long rub along 2 steel boats. So is the problem of trying to avoid contact, to throttle back means any steering is lost, bow thrusters can help but a slow boat still feels like it is going fast. Time for a break, have a Kit Kat. In old days I would have a cigarette and breathe in the smoke. For some reason nicotine and tobacco was a panacea to the experience. I’m going to remain an ex smoker.

So that was close to the 2 weeks on the Thames. There was time to get back to Abingdon and Nb WAL cruised in! Then there was the rowing event when we left Iffley Lock. I suppose Oxford means rowing. They are a bit of a minefield on a Narrowboat........

Back to the Canals. 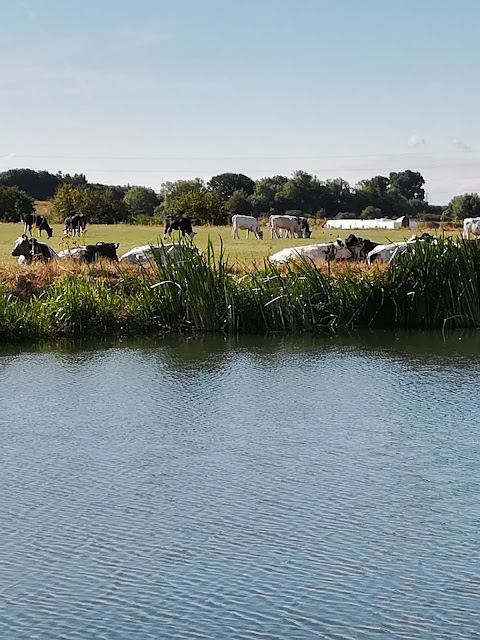 Posted by The Blondinis afloat at 05:38