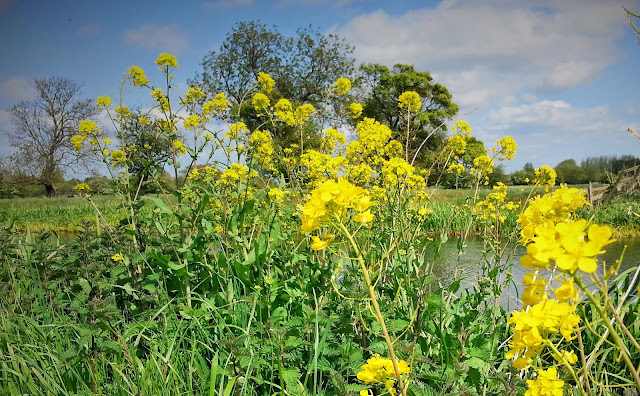 Weather has a profound effect on our daily life. The weather forecast can decide whether or not we untie the ropes and ‘cruise’ on. DolcieBlue (DB) on the move is the way we choose to live. I’m not sure if it’s the trust in the nation’s meteorologists or the weather presenters ‘spin’ in creative presentation of the weather scenario. We live on an island affected by an oceanic climate which, in the big picture, needs to be translated to regional micro climates.  A double tap with the blunt end of an index finger on the barometer can be of more help. OK we are not in the South East, where the weather is likely brighter and warmer, we are in the East Midlands with changeable weather, but usually drier than the West Midlands and Wales. Today it was forecast over 56% possibility of rain. There were a couple of drops this morning but nothing to speak of. 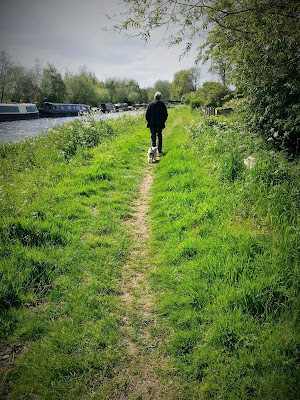 The step off DolcieBlue (DB) onto terra firma or terra ‘squirma’, depending on the ground moisture content, is mostly on to grassy towpaths where the nearby towpath track is dirt or patchy gravel unless its seal has been upgraded. The Canal & River Trust have responsibility for the towpath and I am guessing they work with local councils in some regions where the towpath is accessed by ‘others’ on the ‘green corridor’, as it is known, as well as boat traffic. ‘Others’ refer to cyclists, anglers and gongoozlers to name a few. Oh yes the diversity of our world.

Nearly 2 weeks ago we left the Ashby Canal to cruise along the Coventry Canal before it morphed into the Birmingham & Fazely Canal which will take us to Fradley Junction. Along the way we had loosely arranged to meet up for five minutes with Kiwi friends who drove to our mobile meeting point. Mobile in that we were on the move and it was through technology of a mobile phone and social media that we could keep in contact. While they travelled by car from Bakewell in the Peak District we were on the move for 10 miles to hopefully meet at our last suggested meeting point at Hartshill Yard near Atherstone. They arrived a few minutes before we did and when I phoned them to confirm we were close they were in the distance walking in our direction along the gravelly towpath. The smiles didn’t leave our faces. Where there’s a will there’s a way! 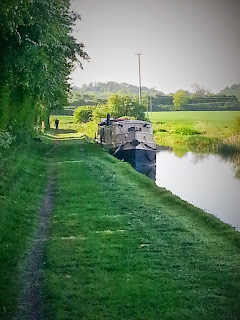 Catch up done, we cruised a couple of miles to the Atherstone Locks and did 9 out of the 11 locks including a pantry fill up at a nearby Aldi. I found a patch of hardstanding or aka concrete on the grassy towpath between Locks 9 and 10 and we moored up in what felt like the middle of nowhere. This is what is so nice about being Water Gypsies, there is a feeling of space and freedom in this crowded country. 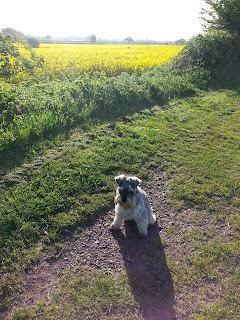 The following day was calm and bright and sunny as was our disposition and we cruised a few miles to Hopwas. I got behind the wheel and could finally understand that no wind gives 120% confidence in steering. DB can keep a straight line with the handles on the ship’s wheel being fed hand to hand. I enjoyed it. It could almost be called relaxing. Oncoming traffic and moored boats were no stress, and a wave or a hello was possible.

We decided to moor for a couple of nights due to the weather forecast indicating 70% chance of showers the following day. I jumped off DB under the arched bridge at Hopwas and the spring in my jump meant my head thwacked the ceiling of the bridge. No damage done to me or the bridge just a quiet “ouch” left my mouth. Recently mown grassy moorings were our chosen spot and we tied up using our mooring rings. I relocated some of the grass clippings so they wouldn’t be walked on or blown on to DB. Once upon a time when we had lawn we used to compost lawn clippings. Good food for our veggie garden. None of this activity for us now. There were a few boats moored nearby and the warm day meant ‘land’ people were walking on the towpath. Della and I went to check out what the attraction was. It must be the Hopwas Hayes Wood and safe to walk through as there were no red flags flying which would indicate the Army were using the Whittington Firing range. The perfume of nature was potent with a spicy floral scent that stimulated my olfactory centre. I didn’t think it was the scent of Bluebells but it might have been. I know blooming Bluebells give beautiful ground cover. The next day under moist grey conditions the ‘heady’ perfume was barely noticeable.
Back to the weather forecast. Fine weather was forecast for the weekend after a day of rain in Hopwas. So canopies down and we headed to Fradley Junction to join the Trent and Mersey Canal and spend the weekend in Alrewas. We know it well, it felt like being back in ‘home’ territory. We thought we’d stay a few days, that is more than 48 hrs so mooring time limit is well marked and we had to reverse back to available moorings. 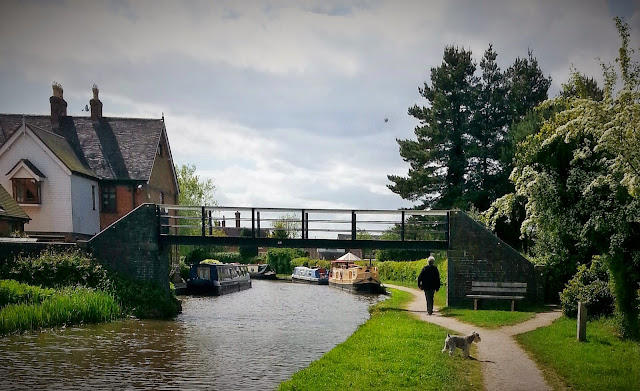 Some Captain Clever Clogs, in his boat, called out to me “What is that terrible sound coming out of your Bow?” I knew exactly what he was going to say but I looked at him in a puzzled way and hopefully gave him a Manuel from Fawlty Towers “Que”? Irritating Clever Clogs replied “Bow Thruster, terrible Bow thruster.” He left me no choice in my response “Where’s your horse?”
As with all the best planning we became aware the weather forecast had changed and a couple of days later we moved to Willington and moored up at a favourite spot, of ours, an open space towpath side near Mercia Marina.

We had D Day deadline to meet. D Day, loosely speaking, was marked as a family day booked for us some months ago. We all had our Dental treatments. Of course Della was booked in to her Vet’s for a tooth clean.  I hear too often of dogs having their teeth pulled as they get older and think that we can be proactive for Della. Della is not her normal happy self after this palaver, the general anaesthetic has upset her routine. But........

We are on the move again under the mixed bag called the Weather. Will summer be here next week? 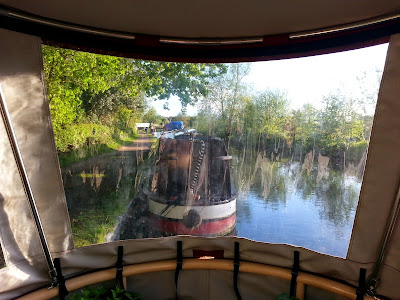 Posted by The Blondinis afloat at 09:55