Winds calmer and skies bluer, cruising through downtown Leicester is a ‘Do-er’ in a day. Canopies down we headed into Birstall Lock where a cyclist stopped and offered to close the Lock Gate after we had gone through. That is thoughtful.

At the next Lock, Belgrave Lock, I was about to close the Lock gate when I saw another boat appear, in our direction, so I kept the gate open for them and we teamed up to share that and the following 2 Locks. 3 extra pairs of hands make for light work in a Lock. In my brief risk assessment of the Lock, I had noted that there was a transparent floating obstruction blocking one of our exit gates at the Lock. No big deal but inappropriate that a bobbing armchair should be floating in a river. We can exit through one gate but 2 gates are easier when there are 2 boats using the Lock. Being on the side of, sometimes misunderstood, good manners I warned an approaching Narrowboat there was an obstruction. Michelin Man gave a huff and puff giving me the impression he would be removing it.  Yeah right  how important is your back, I thought? ‘Elf and Safety would be best put into effect in this instance. I phoned C&RT to report the 'floater'. The operator put my call through to the 'no answer' telephone and, in what felt like a minute, my call was returned to the operator who told me my phone line was noisy and it was difficult to hear me. I told her I was on a boat, engines are noisy and she better get used to it in her line of work. Blah blah. I never did get a call back about the obstruction.

Close to Limekiln Lock we scraped over something crunchy and lost power in the Bow thruster and the other boat just lost steerage but managed to get into the Lock. They limped out of the Lock and moored up for further investigation. We moved on as the Bow thruster was not essential and, later, when we stopped for lunch Chris found a holey blue plastic bag where no plastic bag should be. At the last Lock near Frog Island, I was bordering on closing the gates when Chris saw our ‘partner’ boat appearing from behind. We waited for them. The source of their steerage problem was an abandoned soggy jumper wrapped around the ‘prop’.

The day was not yet over but we said farewell to our Lock partners and stopped, briefly, at Castle Gardens so Della could have a walk before we cruised along the ‘Mile Straight’ followed by 12 Locks before we called it a day! The feel became rural and it is easy to question if we were on the River Soar or the Grand Union Canal. At Kings Lock the paddles need a BW key to be able to release a ‘locking’ mechanism to wind up the paddles. Some of the Locks were missing gate / ground paddles. Luckily a Lock can still fill on one open sluice. We witnessed no challenging behaviour, canal / river side in Leicester and have no fear about cruising through again. 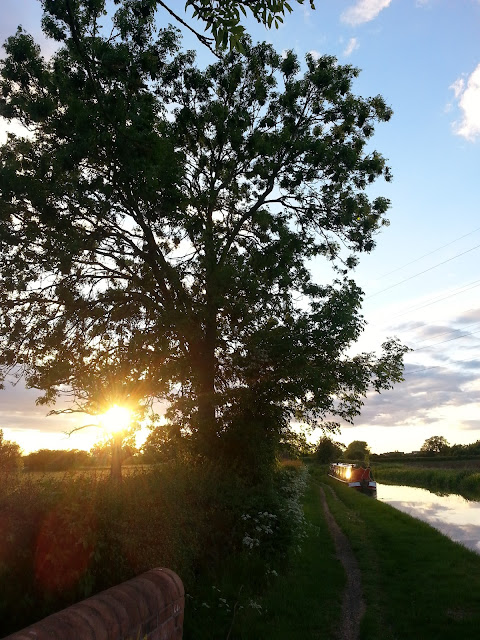 This day’s cruise must have taken us at least 10 hours. Sensibly Chris spotted out a good mooring site near Double Rail Lock. A beautiful countryside mooring with rural walks, and the neighbours, NB Dormouse, were a delight and give meaning to ‘Ships that pass in the night’.

Two days later we moved to Kilby Bridge. I had a struggle with the ground paddle at Double Rail Lock when my windlass was rejected under pressure by a ground paddle. I don’t know if it was under pressure but I couldn’t bleeding wind it and I fell, still clutching the windlass, landing flat on my tummy and knees. “Ouch!” I raised my arm thinking a thumb’s up would be seen on DB as surely my sudden disappearance would have been noticed! No I had not been missed! My jeans had a bloody rip at knee level but my moment was short lived and I got on with the job. Plaster not plastered came later.

Kilby Bridge is a stopover must. The Navigation Pub at Kilby Bridge is fantastic, the locals are friendly and the food looks excellent. Just like we thought last year, we shall return.

Posted by The Blondinis afloat at 06:38