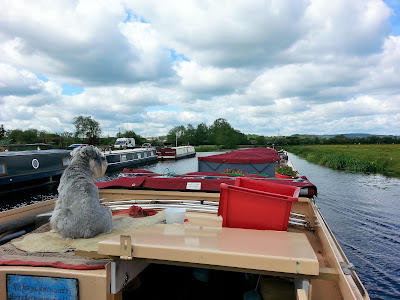 Slowly and certainly we are Market Harborough bound. The weather still rules and I won’t go on about it. Suffice to say it has watered our roof garden more often than I have. A few days ago we left the ‘fright path’ with canopies down and ticked up to Zouch (without an ‘e’) and I wonder if it is pronouced ‘ouch’ with a z? I forgot to ask. A good circular walk for Della and the last work out for a few days for her. She was not well with the D & V’s (as it is known in Hospital talk) and we hoped the gremlins would work their way out of her system pronto. Della is a thoughtful dog and she was able to wake us through the night when nature called. We moved on to Barrow-upon-Soar and her condition needed medical attention. Chris did the Bus Pass slog back to Willington to collect the car. A four hour trip, and I sourced a Vet to see Della later in the day.
I couldn’t leave Della alone to get a word of mouth recommendation for a Vet so I googled some local Vetinary Clinics and made a decision through their feedback. Appointment made for mid afternoon when I was sure that Chris would be back with our car. To cut a long story shorter, Della was given the 3 anti ‘mix’ jab to dry her up, stop the ‘chucking’ and kill the gremlin. Miraculously the next day she was better but had a repeat jab and a short course of antibiotics. Fingers crossed and touch wood she is over it and I am in no rush to be proactive with her teeth again. 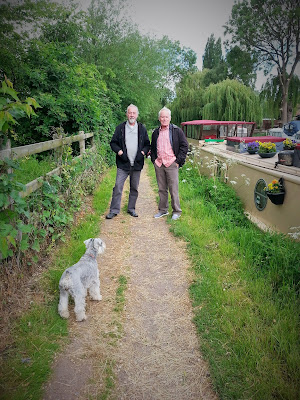 To put a bit of brightness in our day, Hawaii Tony popped in for a 24 hour visit. He is a regular once a year visitor who has experienced our life on Avalon Mist and DolcieBlue. Tony was instructive in my Lock operation Badge back in 2011 when I had my first introduction to Canal life on the heap of steel fondly known as Nb Avalon Mist. He was the third party in our crew including the Captain on the day we left Devises and went down 22 Locks which included the 16 Caen Hill Lock Flight. I remember being anxious about the Lock chambers,

I was sure that I’d not be able to remember the Lock operation and it would be easy to lose footing and fall in. As to the descriptive words like windlass, paddles, gates, lock set blah blah I was learning a new language. I could hold the rope and be helpful with that. Anyway that day has long gone and I am a natural with Locks now. 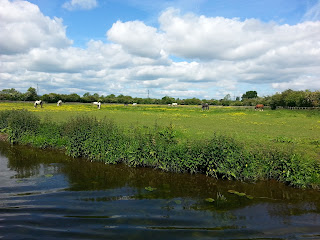 Or so I believed that I would not be overcome with a quirky Lock, I may not look like I have a 6 pack toned abdomen, beefy biceps, and maintain the looks of a spring chicken but I’m not dressed as mutton. We moved on from Barrow and enjoyed the slow pace of cruising the river and the pretty rural scenery. Day trippers shared some locks with us and we decided to moor up DB with a view to spending a few days in the Leicestershire countryside before we cruise through Leicester City. The towpath was grassy and I walked some metres beyond the Lock, ahead, to check out if there were better mooring spots. I found the towpath was paved. Hard standing! Yes as long as our internet signal remained good then a clean mooring had an appeal with the forecast for rainy weather.
We agreed to move on a few metres. The Lock was in our favour so I opened the gates and DB entered. All good and gates closed I wound up one of the ground paddles and walked over the gates to open the other ground paddle. I noticed the Lock was a leaky lock as water was exiting the back gates as quickly as it was flowing in. I couldn’t get the 2nd ground paddle to wind up, without busting a gut, so I carefully wound the gate paddle taking care opening it.  I noticed Mr Helpful, on foot, carrying a Windlass and almost running across the Gates. He didn’t say anything to me and just wound up the ground paddle with macho gusto. I said “Thank you” and walked the gates to the other side with him following close behind. He was hovering and watching as I got my windlass in position to wind up the paddle. I really disliked having his beady eyes taking over my territory and I told him I was well experienced with Locks. It was an unhappy ending.


When I reflect on this event, I have learnt that being helpful should not involve taking over an activity. It could look like an extra pair of hands would be useful but talk to the Lock ‘operator’ first. 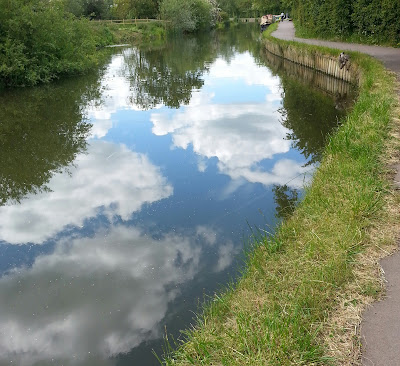 To assume makes an ass out of u and me. This was not an emergency.
Posted by The Blondinis afloat at 10:09