Yesterday’s cruise from our overnight mooring in Handsacre was beauty to behold. The sun burned through the morning haze just as we got moving. I think the Boater wearing a sleeveless Tshirt gave out a sign of encouragement. He certainly was full of positivity when I called out to him “Do you know something I haven’t heard about?”

We were on the outskirts of Rugeley, in no time at all. The Armitage ‘Tunnel’ may be a misnomer now but it is still narrow and one way traffic only.
“There is one boat heading, this way.” said Mrs Lady. “Actually there is my boat and another boat. Oh and there is one after that.”
“So there are 3 boats then.” I tallied it up. Three fingers! Simple arithmetic is ok for me. “I’d better walk to the other side and stop the boat traffic should any appear! Bye.”
All clear and I asked the last Boat to confirm with DB that the coast was clear.

Back on board and we cruised along to the water point. Topped up with water we pulled out towards the blind-sharp bend that included Bridge 62. Cptn blasted our loud horn and no responding signal was heard. On we moved. Of course, there was a boat coming, merrily, towards us. DB was put into reverse thrust immediately and a catastrophe was avoided. Eventually matey moves past us.
“Did you hear our horn?” I enquired.
“Awww, no.”
Further questioning from me “Did you use your horn?”
“Awww, no.”
‘Plonker’ I thought.

That was when DB decided to put out sounds that something was caught in the weed hatch. No hidden treasure was found. What you don’t see under water level. 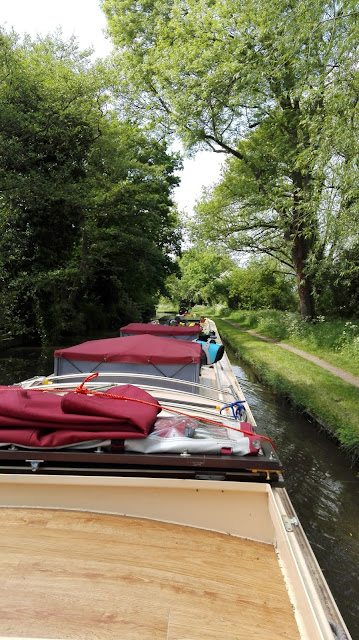 Ambling along the Canal on the outskirts of Rugeley town, I played my Ukulele with engine accompaniment. We passed by a lot of houses with creative and looked after canal side gardens.

We did see one ‘doer-upper’, more than likely, a ‘puller-downer’ for sale. For us the memory of a former lifestyle, the attraction is inviting but our impulsive and hands-on drive has passed its ‘best by’ date.

Thought turned to mooring for the night after Rugeley. The countryside was dense with Spring colour and blossoms. 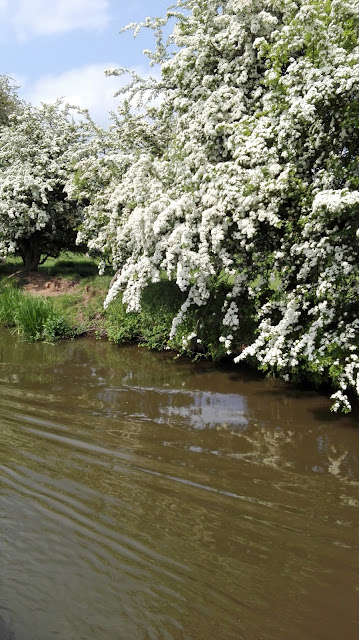 There were pockets of boats moored up and we knew the railway line was nearby. We ended up moored at Great Haywood. Remembered by me for the time I fell into the Great Hayward Marina when I had no footing stepping off Nb AvalonMist onto a (Canada Geese to blame)pooh-covered boardwalk. So until now, Great Hayward was not on our list for stopping.

In hindsight, I was wrong. The countryside is outstanding. The Earl of Lichfield’s mansion lured us from the Canal but the internet signal was not strong enough so we moved up the Lock and moored near the Village of Great Hayward. It is welcoming and hope that our first meeting with a random local, by the name of Pete, is not our last.
One fine spring day in Great Haywood is more than an act of luck. I remember Patrick Lichfield, the photographer in the days of Princess Margaret and I read that he became a pioneer in digital photography in the late 1990’s. He was the 5th Earl of Lichfield and his upmarket country residence, Shugborough, graces the River Trent and can be seen from the Trent & Mersey Canal. Before he died in 2005 he is remembered, locally, as a friendly person who talked with Jo Public walking Shugborough gardens. He gave the Shugborough Estate to the National Trust in 1960 in lieu of death duties.

JRR Tolkien also spent leave from WW1 in Great Haywood in January and February 1917 where he started to write ‘The Book of Lost Tales’. Did he find Middle-Earth here? 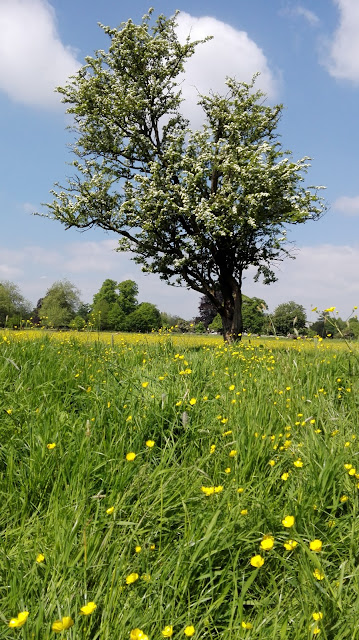 Well we may find out if we keep up with talking to gongoozlers. 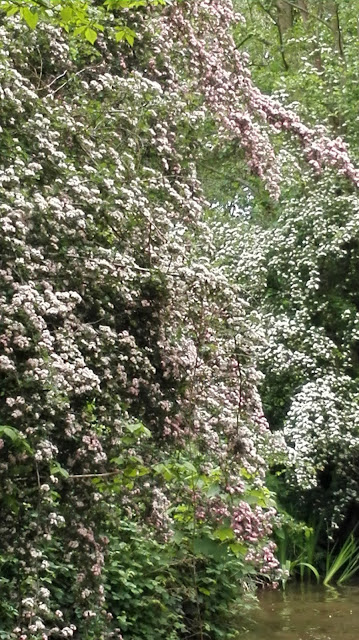 Posted by The Blondinis afloat at 07:57