WHAT HAPPENED? A WASGIJ SNAP.

The Staffs & Worcs Canal northern branch begins or ends at Great Hayward. For us it was the beginning and our aim was to get to Penkridge and moor up for a couple of nights with canopies over stern and wheelhouse in situ while rain was forecast to pass overhead blah blah. Bank Holiday Monday was sunny and warmish in our locale and the scenery improved as we made our way along the canal. There was a steady flow of boats moving in both directions that can give a synchronicity to Lock use. The deep narrow Locks give a steady fill and raise DB up where she belongs. The action is from winding up the ground paddles rather than gate paddles which means the water pressure entering the Lock is not seen by the person wielding the windlass. Paddles opened fully straight away mean the boat lurches forward and reverse thrust is not effective to hold the boat back. In our case, DB takes up a lot of the Lock and when she lurches onto the button Bow fender there are a few upsets in the cupboards and bench tops. Not the end of the world but a measured winding up of the paddles halfway negates the water surge. Fully wind up the paddles when the Lock is past a 1/3 full. That’s my take on it. If helping another boat then ask them how they would like you to help. 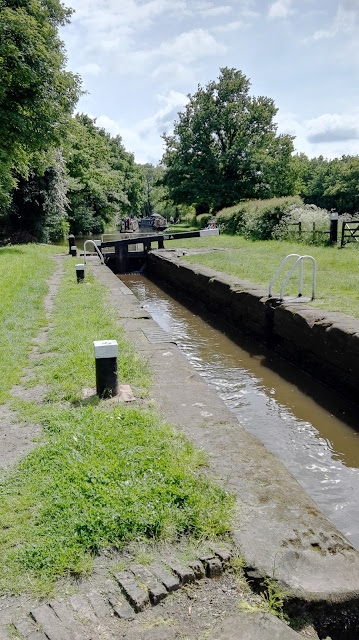 The fish torturers, I mean Anglers were lined up near one Lock we were approaching. Some were holding titanium fishing rods that looked the size of weapons of mass destruction slung over the Cut. They moved them out of the path of DB at the last possible second. Imagine if they were just hooking a fish! The Anglers do not appear a cheery bunch but it could be their state of deep concentration or is it meditation. Like I am reminded every day on planet earth ‘Don’t judge a book by its cover’!

Penkridge on a sunny cooling spring afternoon is a fine place to moor. The towpath was busy with people wearing smiles. We got busy with the Canopies and within 15 minutes we were ship-shape or is it boat-fit?

Cptn disappeared although I could hear his voice. Turns out he met John who lived in the house behind the fence where we were moored. A lovely man who had invited Chris and later, me, to see his tidy garden display of early vegetables and flowering shrubs. He proudly shared with us that he and his wife had recently celebrated their 60th wedding anniversary. Wow, he carried a clipping from the newspaper with an article and photo of them, and he said that HM Queen Elizabeth had sent them a card. Who’s going to send the Queen and her man a card next year when they make 70 years of weddedness? I wonder what precious jewel is left for her - a vintage Philip?

While I was looking at John’s garden there was a knock on the garden gate-door.
“Is this your dog?” the woman asked John. “It was standing outside the gate-door when we walked past and I said to my husband that if it is still there when we walk back I’m going to knock on the door because it might be lost or abandoned.”
I thanked them very much and reassured them that she was my dog and lived on that boat behind them. Once again human caring and thoughtfulness appears. Della is always keeping an eye on the hand that feeds her. She likes to keep up with where her ‘team’ is.

The Penkridge Wednesday Market was mostly stalls of the usual tat with less than a handful of produce sellers. It was similar but much smaller than the markets in Spain and Portugal. We did get 3 huge packs of bacon and gammon cuts for £2. Good we have a freezer!

Time to pack up DB and get under way. I fancied a rural stop, for a change. Yes it is England and yes it is like that song “Little boxes on the hillside, Little boxes made of ticky tacky...” but as I keep reporting there are rural areas that are still farmland and not everywhere are the power lines and chemical factories seen. But I was keen to be away from civilisation for a night.

We did the Lock – Helm share doing turn-about. I’m feeling more confident or is it competent behind the wheel. I steered DB for a distance after the last Lock which had a few tricky manoeuvres. The Cut became less busy, fortunate for me because there are a few blind bends.

The Hatherton turn was one of the tricky bends once it became apparent the Canal didn’t turn to port but was a sharp turn to starboard. The working boat moored just on the turn was not helpful and perhaps a sign indicating the way the ‘real’ canal goes would be helpful. I’ll remember now! As chance has it the nose of a Narrowboat appeared heading towards DB. I held DB back, it was close but no cigar. Another boat held back while I turned DB and moved to the starboard edge of the Cut. No steel kisses to be had.
I took a selfie photo to try and capture the Hatherton turn rather than me! I was trying out my skills of multitasking at the wheel. I could see another bend approaching but I thought I had time to get DB around that with no problem. Fine chance, I got her stuck in shallow water and needed Cptn to talk me through a get out technique.

We moored up in the spot I had hoped we would find. 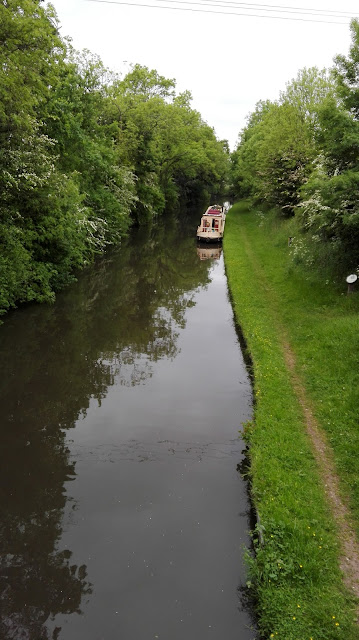 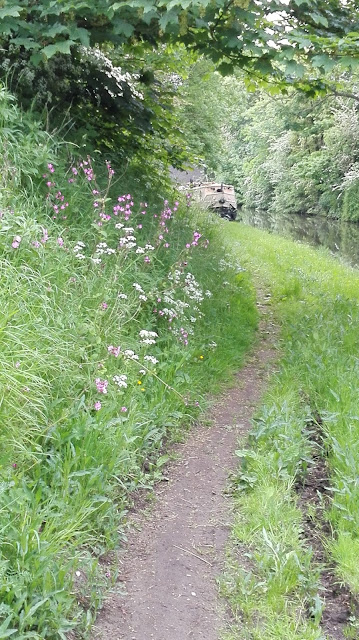 Posted by The Blondinis afloat at 08:42