We chose to make Wheaton Aston to Nantwich a slow four day journey. We had stopped for a long 48 hours that took 3 days, in Wheaton Aston waiting for our mate, from Hawaii, to meet and join us for a slow cruise passing beautiful green countryside with trees burgeoning with blossoms.

We arranged for him to meet us at DB and we would drive to Brewood (pronounced ‘Brood’ of course) and go to a dog friendly canal side pub there. The canal side pub in Wheaton Aston is more a food pub and dogs indoors were vermin and had to be kept outdoors on the edge of the carpark. So we were not feeling encouraged to give them our custom. The Brewood Pub was dog friendly but noisy with children and pokie machines. Our best place, in hindsight, would be drinks on DB. 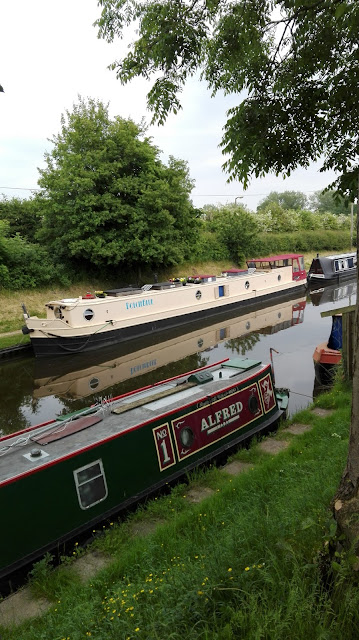 Next morning we were out of Wheaton Aston passing the end of field mooring that had been ours for 5 mins in 2013 when we had plans to moor DB there.

I thought about the enxada, our hoe-shovel from Portugal, we had left there with thoughts of getting involved with planting! Now it’s a memory archived in my life’s laundry. The late morning sun was working at burning through the hazy cloud layer and soon the water point, just past Gnosall, beckoned.

Tempted by the warm sun to leave the blokes on DB I walked the pretty towpath with Della to Norbury Junction. Della was a little perturbed that the ‘Team’ were being left behind but she soon got over it and followed along in her happy way. I stopped, occasionally, to talk with ‘random’ gongoozlers and Della got the customary pats from them.


We walked nearly 2 miles until the first ring moorings before the Junction and waited for DB to arrive. As soon as DB was moored Della and I stepped aboard. I gave Della one of her customised biscuits as a 3 second treat and I disappeared to the bathroom. I noticed DB was underway again and a minute or two later I went onto the stern deck to watch Norbury Junction pass by. There were a lot of moored boats and it was only when we got to the end of them that

“Indoors probably, she must be tired from her walk and having a sleep.” I said.

Cptn does Della’s ‘Pavlov’s’ dog whistle that she always responds to. No Della appeared onboard and no sign of her running along the towpath. Exclamatory remarks, with sound, passed our lips and our faces wore looks of concern. We knew she would be all right but we knew we had to find her pronto. I got on land holding her lead and walked speedily back towards the Junction calling her name with a loud voice. Once under the bridge and over the footbridge I was passing The Junction Inn, listed in The Nicholson’s Waterway Guide 4 as a superbly situated canal pub. Guess who was on a lead lapping up the attention from a handful of people? Miss Della!!! Her olfactory centre must have got a whiff of my unique smell along with the familiar sound of my voice and she took a moment to leave her adoring crowd. So she wasn’t pining, yet, for us! Such a well adjusted little doggy. I listened briefly, to her ‘finder’ outline the events and thanked her profusely. Lead on, Della and I walked off as Cptn appeared from under the Bridge and we went back together as the ‘Team’ to DB.
Doggone, happy ending but fingers crossed, not to be repeated.

Still the same day we carried on to moorings at Anchor Bridge, Bridge 42. I had highlighted the mooring in Nicholson’s so that means we had stayed there before on Nb Avalon Mist. I think I remember it but the picture in my memory bank is different. Does that make sense? It does to me! But then my wanderlust lifestyle makes daily life a challenge sometimes. A rural setting with a Pub that would open at 7pm. What better than to sit on the stern deck, play Ukulele and Guitar and enjoy being bathed under the warm afternoon sun?
Boats went by and some moored up then moved on. Late afternoon I heard a squeal then a splash then a squeal, a giggle and I put 2 and 3 together and realised a woman or a man with a high voice had fallen into the Canal. My character borders on being ‘over- helpful’ or is it the ‘big-Nose’ Pinnochio, anyway I stepped on to land with my rubber-neck and saw that a woman was in the water and her friend, another woman, was on land making moves to help get the laughing one out of the water.

So between us, that is the 2 women on land, we managed to assist the ‘faller-inner’ rise or was it roll, let’s say her R and R to land. No Rocks were involved! Della supervised the rescue at her chosen safe distance. Turns out that the ‘victim’ had untied what she thought was the Bow rope to her boat but was actually the Stern rope to the boat in front, and as situation confusion took over she must have fallen in. Needless to say the stern rope on her boat was untied and during the mayhem her boat started drifting off! No damage to boat or victim. Thoughtfulness to affect a tricky lift meant no injury to us ‘The Helpful’. Another happy ending.

All I can say is that‘ll teach us not to fall off a boat! Some people wear life jackets, on the Canal. That would only be good to reduce stress levels but may give something for a helper to grab hold of. The water is around my thigh height or shallower (I’m 1.7m or 5’6 ¾ in the morning!) The tricky part is being able to push up off a muck filled soggy underwater floor to get out of the water onto the bank of the towpath. Getting out of the Canal onto a steel surfaced Narrowboat is another story. We carry a rubber step rope ladder just in case!

Here are some photos of the next couple of days which involved some Locks, some 24/7 fall-out but all-in-all the beautiful scenery was the winner and now we have C&RT empathising our use of 48hr moorings in Nantwich giving us time to get our Canopies repaired.


Loving the Salopian feel of the ‘Shroppy’Canal.

'From here until tomorrow
It might take a year
How long it takes to get there
I don’t really care.’

Posted by The Blondinis afloat at 08:50