CRUISING DOWN THE RIVER 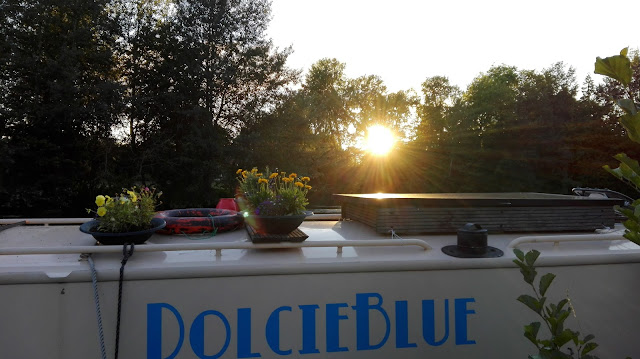 I don’t think we are on a cruising ‘ring’, but we have been on a few rivers this year.... R. Soar, a touch of R. Trent, R. Weaver, R. Severn, R. Avon, a hint of R. Kennet as it merged with the Canal that shares its name, and our finale of the season on the R. Thames ending with a snippet on R. Brent.

On the river DB is ready, with her canopies, to adapt to the vagaries of weather in this climate- challenged country. The Thames was going to be a mixed bag, weather-wise, and we started off in Sonning with the Wheel House canopy in situ. We bought our Environment Agency (E.A) Thames license, from the Sonning Lock Lock-keeper, issued as we went down the Lock. We were legit to be on the Thames and could take our time, 7 days, to get to Teddington Lock where we would be lowered on to the tidal Thames, controlled by Port of London Authority (PLA), cruising 4 miles to Thames Lock, Brentford.

The river was busy mainly with fancy white‘Tupperwares’ jetting up and down. There were the occasional  ‘Steels’, some yachts, dinghys, kyaks and rowing boats with or without coxswain. Generally big boat traffic keep to the rules, the others can be a different kettle of fish. 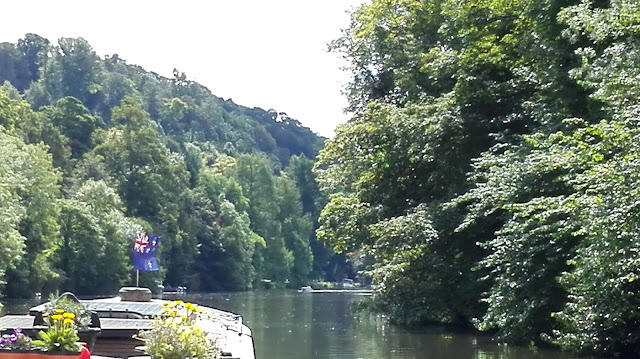 Last year, we cruised without paying mooring charges. This year, for my memory and to share, I’m going to list our R. Thames moorings.


We have been informed that some small ‘plastic’ boats are being stripped of their name and identity number and mooring long term in Visitor Moorings used for accommodation. The boats are not licensed to be on the water. We came across a couple of these boats and I wonder what The Environment Agency is doing about this. Tut tut, it annoys me but no-one and no organisation are perfect!

On the final day of our river License we left Walton-on-Thames and cruised towards Sunbury Lock where we were stuck in boat congestion! 60 minutes later, guesstimate, we were approached by the line of Dunkirk boats en masse as they were heading up river.

There had to be a few Lock fills to get their group at ‘our’ level and the growing queue of boats held-in-waiting were puzzled that no boats were being put into the Lock before it was emptied for more Dunkirk’s! Still we got lots of waves from the Veteran’s as they cruised past our smiling faces. Thanks, a WW2 memory never forgotten by many that lives on.

Later, we got moving and only Molesworthy Lock, near Hampton Court Palace to go through before mooring up above Teddington Lock to wait for the incoming tide to be almost at high tide. We checked in with the Lock Keeper and moved back to the front of the queue! Perfect. I gave Della a walk and called out to Chris, the Narrowboater who witnessed our derring-do on the K&A Canal at Newbury. I had recognised him waiting for Teddington Lock on his Nb! An unexpected meet up but a small world indicative of the life we lead.

Time didn't stop and boats started up their engines giving the signal that the Lock had its 'green-for-go' traffic light glowing.

We went in Teddington Lock and soon out on the tidal Thames punching the last of the incoming tide.
It was a 4 mile cruise with the ‘revs’ up to get to turn to port on the R. Brent. I took the helm for some of the journey and enjoyed the responsibility and recognising some of the familiar Richmond / Twickenham landmarks. It took about an hour to get to the turn on to the R. Brent and soon we were at the Thames Lock and with the green light to enter one of the 2 automatic and staffed Locks.

DB had the Canopies in situ and we were warned that they may have to be removed before the road bridge to the Brentford gauging locks. So the tide was now going out, ebb tide, and this we hoped would mean the canopies would be OK. Cptn went out snail’s pace and I noticed we were pushing a huge amount of river weed. A reverse thrust didn’t dislodge the weed from the Bow and I became aware there were 2 Narrowboats now following closely behind DB. This meant there would be competition to be first out of the Locks thankfully operated by C&RT volunteers leading into Brentford Basin moorings and the start of The Grand Union Canal.

Suffice to say we only just cleared under the road bridge, were first into one of the two wide Locks, first out of the Lock, and first to get the only remaining mooring in the Basin.

If our mooring quest had turned to custard, there are mooring rings just outside the Basin and the other boats bar one managed to get their ropes on these. There was still space for the last boat to bang their mooring pegs in.

Posted by The Blondinis afloat at 05:19