I enjoyed the experience of a brief late summer surge. It was melting heat for almost 3 days. It began with heavy morning dew that evaporated as the heat of the day rose to give a pleasant evening warmth lasting well into the night before the small hours chilled the humidity and dawn would begin with heavy dew – the nature of nature.

Using the Tesco mooring at ‘Ricky’ and I popped in to fill their trolley with my trolley and non essential items in the supermarket, mostly, for ballast. It’s amazing how accurate I get with filling my trolley, I think I am a contender for the terra firma Trolley Dolly! After breakfast we took off and caught up with the Australian and shared a few Locks to Cassiobury Park, Watford. We were going to moor up before the Iron Lock but we got grounded. A touch of Dredge-it would make a huge difference but fat chance of that happening. So we went to the shady moorings above the Iron Lock and took off, early the next day, sharing the Locks with father and daughter to Kings Langley.

The early start meant I had time to varnish the oak now in situ on the side hatch interiors, and have a play on my Uke. Actually I play my Uke(s) pretty much daily. I want to be ready for  ‘Ukeoholics’  in Spain!

We set up the Wheel House canopy, as rain was forecast to fall and the late summer burst was going to end, that night! I managed to get some washing nearly dry on the clothesline and thankfully it became dry enough with a bit of creative positioning under the fading sunrays. Later, a passing thunderstorm was audible as the sky darkened and Della got a bit freaked! She never used to!! Thunder and fireworks are an anxiety trip for her now!!!
Our overnight mooring near King’s Langley was rural and a wire fence embedded in the towpath hedgerow separated the canal and a fishing lake where some Anglers were camped. It was weird to wake up and hear voices, loud voices, as their tent started to flood. “Get a boat” I thought. The heavens opened and rain bucketed down until late morning. In hope that the rain was finished we untied DB and headed to the next Lock. The water levels were high which meant the Wheelhouse canopy needed to be removed before the Lock as a low bridge would have done the job for us!

The rain started up again, and we got well washed going through Hemel Hempstead. We are becoming aware of the Widebeam boats, on the Cut, that seem to be Continuous Cruisers pretenders. They are moored on linear moorings either near bridges or on bends. I don’t think they are thoughtful about their size and I don’t think they play the rules. We, Narrowboaters, need to be understanding of their contribution to the Canals. I’m not sure what it is they offer! We pass some of these boats being fitted out. Yeah, I can see that a 14 Day mooring isn’t appropriate but they take the p***. The 14 footers are twice our width and their license fee depends on boat length like us. I know I’ve got to get over it but they need to be prepared for contact sport now becoming known as a ‘Westie’ after the steering skills of Timothy West as seen on TV. I do not aim to give a steel kiss but if they are in the way then they are in the way.

On the outskirts of Hemel, the rain was pouring down and I needed a bit of a push to go up the flooding Boxmoor Lock. The Canal was running more like a river, the Lock was overflowing and I was nervous with the thought of banging the pegs in above the Lock but there was another boat moored up there and I felt better that I left one back gate paddle raised, once we had ‘done’ the Lock. The water would then run away and down a side water drain to the River Bulbourne. I think said River is usually like a Creek!

Inclement looking weather, next morning, but drier than the day before and a ship going down the Lock gave me the impetus to get on the move to Market Harborough aka ‘Arborough.

Cptn was on Lock operation works to get us to Winkwell Swing Bridge. The swing bridge is a key operated traffic stopper and I thought Cptn would enjoy the experience. An Australian going the other way greeted us at the Lock and said the Bridge is busted and help is on the way. It was Saturday and after waiting 30 minutes I phoned C&RT emergency phone number who told me they knew about the bridge and someone was on the way. I asked when they will be arriving and I was told ½ an hour. I said that was what they told someone an hour ago! Anyway 15 mins later the bridge-men x 2 arrived and they got the bridge swinging. We gained another BW key left by an Australian. That’s a bonus. 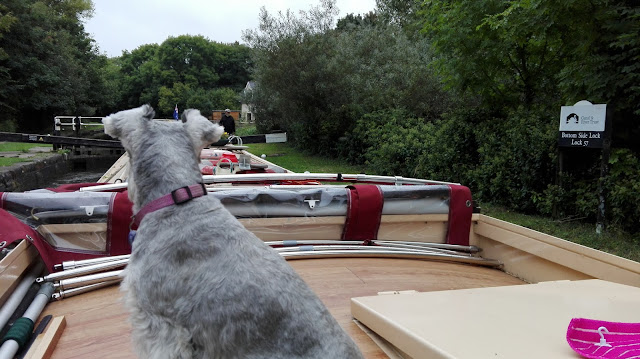 Up, up and away. 7 locks later we moored in our ‘usual’ spot in ‘Berko’. Nice spot and we were waiting for a package of coloured vinyl contact sheets so we could get working on DB’s aesthetics. We rely on Poste Restante for mail deliveries. This delivery was not a smooth hassle free one and the post mistress had some words for us “Please let us know when you are having packages delivered to us. What is your phone number?”

As we were leaving Berko we found a windlass left at a Lock; a Slazenger tennis ball and bathroom tiles by the boat rubbish bins.

Posted by The Blondinis afloat at 06:26