We rested for 3 days in between the upper Lapworth Locks waiting for my mobile phone to be returned to a Carphone Warehouse in Leamington Spa. I wanted my phone back and I was getting annoyed waiting in a black hole for it. Finally, the call came through that it was ready for me to collect. Thank goodness we had our car parked in a handy location so I could put the imaginary Kojak flashing whirly light out to air! My phone was put out to the home for ‘unfixables’, and I was given a replacement which they say is the same type or better. Touch wood that it will give me a reasonable life in my hands! (Update - It turned into bleeding phone nightmare, I ain’t no nerd-geek and I have spent some days trying to work out how to ‘import’ the photos from my SD card. I think it’s sorted now!!! I have no patience none whatsoever anymore!!!! Thx Cpt. Hubby x)

It was a long cruise, for us, from our country mooring around the bend down from Lapworth Lock 5. We only had 4 Locks to work. Lapworth Top Lock 2 is the final Lock on the Stratford Canal. Where is Lock 1? I can only assume it must have been a Toll Lock or a flood Lock at King’s Norton Junction. It’s not mentioned in the Nicholson’s Canal Guide.

Boat traffic appeared close to hibernation with minimal movement on the waters. Of course when it is least expected a Narrowboat appears. We were closing in on Bridge No.8, far enough away that I had time to prepare and grill a croissant toastie, a sort of croque monsieur á la Kiwi, let’s name it ‘Choke Bruce-mate’. With the fridge monitor lurking in the background there comes a time that the ‘Best Buy’ has to be used before I forget to get ‘a round tuit’. You know what I mean don’t you?!! So my ‘Choke Bruce-mate’ is home-made tomato relish, chorizo, small vine tomato, and Vintage cheddar on a croissant. Yum yum.

Our plan was to tie up at the bridge mooring to gobble our lunch and have a ‘cuppa’ before I use the BW Key to stop traffic and raise the automated bridge. A holiday boat was moored at the bridge mooring, no sign of life so they must have popped into the nearby Pub. We had to do Plan B, and stop the traffic, raise the bridge and moor on the other side. Bridge instructions are clear on the small screen ‘Keep finger on OPEN button to raise bridge’ ‘Keep finger on CLOSE button to lower bridge’. As soon as DB’s stern was clear of the bridge, I pushed the CLOSE button. I didn’t check to see if there were any more boats coming. Finally, the barriers went up and traffic started moving and then I see another boat approaching! Shortly after, there were another 2 boats. That bridge is certainly a traffic stopper. 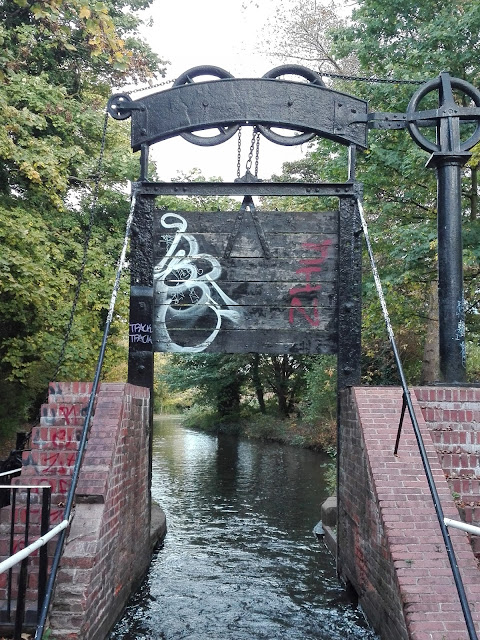 Eventually, we arrive at King’s Norton Junction where the Stratford-upon-Avon Canal terminates with a T intersection meeting the Worcester and Birmingham Canal.

It was a sharp turn starboard to go straight under the low arched bridge and about 5 miles to get us to Gas Street in central Birmingham. I was at the helm, all the way for this bit of the cruise. Highlights in the dimming daylight were
“Kiaora” said a man on foot.
“All is ka-pai?” I questioned and was greeted with a nod and a smile.
The canal straights were long, and it felt like it was taking forever to get to Gas Street. One bridge we approached I said to Cpt, “Is that a C&RT Boat on the other side of the Bridge or is it Hi-vis walking on water?”
Luckily we weren’t going at speed and I had to get Cpt to give me clearance that there was enough space for DB to get past. “Why was there no sign?” Word has it that signs do not stay in place very long in Birmingham!

We got to Gas Street just before dusk and there was a mooring waiting to be taken. Perfect.

Birmingham is very cool. Friendly helpful people and The Mailbox is a stone’s throw and opens to vibrant downtown Brum.  To me, it feels like a city should feel.

Posted by The Blondinis afloat at 09:28