BACK TO THE START

We have not noticed much in the way of Canal traffic on our move along the Grand Union Canal -Leicester Section. In fact I wonder, in Canal time if boat congestion ever happens? Thoughtlessness, yes, in the shape of 2 privately owned Narrowboats moored on the Grand Union on the towpath side of a ‘winding’ hole. Am I the pot calling the kettle black in a small world? Yes but no but..because we were considerate with our encroaching mooring on the Winding Hole, the night before, at the end of the  Welford Arm. We knew there would be no traffic that night and we had cruised off at ‘sparrowfart with the plan of being the first, and as it happened the only boat waiting at the Welford Lock.

We moved slowly at ‘tic’ speed most of the way from Welford to Crick, where we spent the night. I wanted to have my birthday in more social surroundings and we were headed Braunston bound to moor up for a while which would, also, give us close access to our Caravan which has the remainder of our life’s laundry. That’s another story.

Crick is known, by Canal boaters, for its annual Boat Show and Waterways Festival held every May Spring Bank Holiday weekend. We bought tickets to visit this Boat Show while we were dreaming of having a boat built for us. We drove to Crick, that year, and it was dreadfully wet without even going in the water. Not really our cup of tea but a good visual informational recce to check out engines, boat paraphernalia and to source out suppliers as well as identify other solutions which wouldn’t empty the Bank in our vision of a future DB. I know some boats are eye candy and flavour of the month but I believe that with time, patience and the skills of my husband we have come up with the bespoke winner for us in DolcieBlue.

Crick Canal side, for visitor mooring, is a cyber hole for internet access and with our, almost, daily need for internet connection we were ready to move on almost as soon as we tied our ropes. Awaking, next day, to the early morning bird song I got up and made a pot of tea. While it was brewing I walked Della for her morning constitutional along the straight towpath. Della is a joy throughout the day, always more than ready for action and we are rewarded with her zest for the small things in life. Once her business was completed she hot pawed it back to DB then ran back to me then back to DB and so it continued in rapidly decreasing lengths. Doggy breakfast for her and the final check on the Boat headlamp for us, in the form of the mobile halogen torch temporarily in place for the two tunnels on our route that day.

Engine running and mooring ropes coiled up we were off the short distance to pass through the 1528yd leaky Crick Tunnel. The tunnel is wide enough for 2 Narrowboats to pass. It is likely boats will make light contact. It feels good to meet the light at the end of the tunnel.

Under 2 miles from the Tunnel portal the Watford Locks appear. There we were met by C&RT Volunteer John who facilitated our happy descent of the 7 Watford Locks of which 4 locks make up a staircase. John worked with us and had confidence that we could manage without being overbearing with his help. He reiterated the painted paddle workings that applied at the Foxton Locks “Red before White”. I told him the colour combination was a different story with Wine and it goes like “Red after White, you’re all right. White after Red, you’re dead.”
We were out of there and on to Norton Junction, the Mainline Grand Union Canal, 2 miles away, where we turned to starboard. I suppose what happened at Norton Junction was a case of 2 boats meeting at a T intersection. Should have been straightforward but the ‘ancient mariner’ heading in our path was not clear about his intentions and he throttled back which meant we had to and so did the boat coming up behind who indicated he planned to turn to Port. There was little in the way of indicative arm movement or acknowledgement from the ‘ancient mariner’ which would have clearly stopped any guesswork. Ancient Mariner finally pointed his finger desiring to turn into the Grand Union Leicester Section, we needed to turn into his path on the Mainline and boat behind us needed to turn the other direction onto the Mainline. We all needed a helpful little gendarme on a parapet to wave a gloved hand. And dreams are free!

Could all this hot air be responsible for the wild wind blowing into our path? Well the wind was a blowing when I was behind the wheel and while I could avoid the bridge arches I’m sure a cabin height branch scratched 53ft along the side of DB. Not the end of the world. I handed the wheel back to Chris as we approached the 2042yds of Braunston Tunnel. Again, we hoped that we would not meet oncoming traffic but the it was constant with Narrowboats heading the other way. We collected some tunnel wall mostly dust and crumbs and etched a few more marks on to DB. Oh well we got to the Braunston Lock Flight and went through the locks unpaired. Remember we are back to the widebeam canal and the locks can hold 2 Narrowboats. The Canal had a boats heading in our direction so, in that way, the locks were mostly getting set in our favour. I helped a woman who was steering her Narrowboat and travelling alone with her 2 Amazon Parrots (caged) with prime viewing on the Bow. We were waiting for her to move up the Lock so I said I’ll open the gates if she wants to get back on her boat. She did, full of thanks. I had a few minutes to chat with the parrots. The chatty one started it with “Hello” in parrot squawk vernacular. “Hello” I replied. “Hello” it replied. “Bon Dia” I said, testing its Brazilian Portuguese. Parrot was speechless then “Hello”. End of small talk and time to open the Lock gates.

We arrived at the mooring for the last Lock and there were 2 boats breasted (that is tied together) in the Lock and works going on to try and fish out the mooring rope, on one of the boats, that had got wrapped around its prop. Probably not the best place to linger but it was under the supervision of a C&RT Volunteer. We breathed and paced and soon indicated we wanted to get down the Lock and find moorings. Word had it that Braunston was the site of a Boat Festival and moorings were going to be restricted.

There were signs up advising of mooring restrictions but we were OK for a night or two. Rest came easy and we were happy back from where we had started in April. 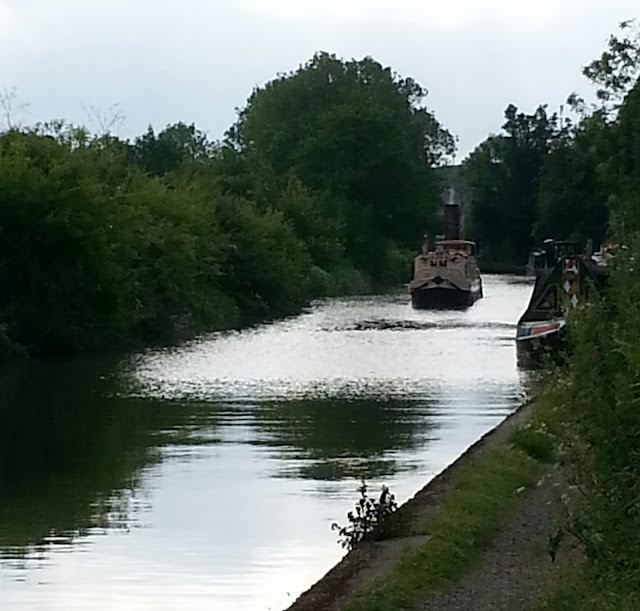 Posted by The Blondinis afloat at 05:02