WHEN L.O.L LEFT THE LADY AT THE HATTON LOCKS 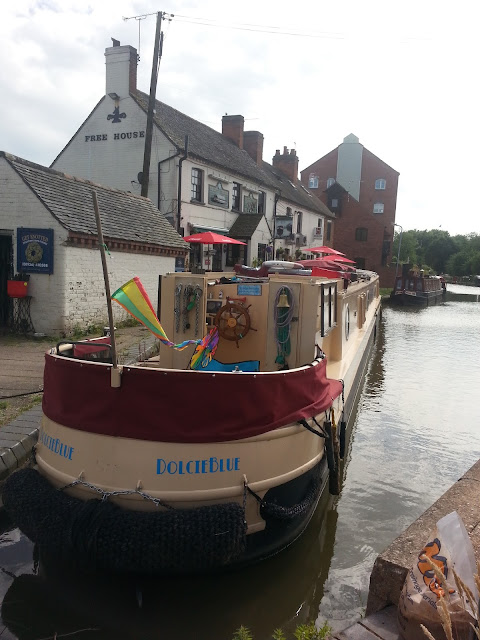 We were rested and ready to move on to Rowington, Warwickshire. The weather forecast looked promising to head up the Hatton Flight and we thought we’d spend the night, before, moored at the top of the Cape Locks outside the Cape of Good Hope Pub in Warwick. A lovely summer’s evening chillaxing in the Kiwi owned and staffed Pub.

In the morning someone was releasing the metalwork securing the tables and chairs. I suggested to the someone this could be  the "Unchained Melody.”

With little Canal traffic on the move, I was hopeful a Narrowboat with at least 2 people aboard would come up the Cape Locks and we could team up. The first 2 boats were travelling together, holiday makers, so when the next boat arrived, on its own, I nabbed them and we agreed to ‘team up’. The woman, holding the windlass, spoke about her respiratory difficulties and said that if she was going to ‘flake’ her husband would take over the Locks. I believed her and off we went. We didn’t have to break any records and we followed the holiday-makers who were ahead of us.

The holidaymakers were entering the first of the 21 Hatton Locks when we arrived. Moving in behind us was another pair of Narrowboats. The first 5 Locks went smoothly. The holidaymakers lost all but their remaining two windlasses in the Locks. Some of the crew from the 2 boats behind us were being over-helpful trying to work our Lock for us. I agreed they could help my ‘friend’ who had breathing problems but I was not happy with them taking control of our lock operation and the pressure they were putting on us.  One of the boats was a ‘Skippered Narrowboat Charter’ boat and I am assuming they had a deadline to meet. Well their logistics should not be my problem.

The holiday boats, in front of us, stopped for lunch giving us a clear run ahead up the remaining 10 Lock rise to the top of the Hatton Flight. It proved to be a tough run for me. There was no sign of anyone in charge of the Locks or C&RT Volunteers in ‘high vis’ clothing. The only sign of C&RT was a tent set up to attract people for donations. I was ‘cream-crackered’ 4 Locks from the top and the C&RT tent people were reluctant to help saying they haven’t had training and weren’t wearing life jackets. My breathless ‘Lock’ partner appeared late enough to be able to use her challenged breathlessness to talk with the C&RT representatives. No sign of her flaking.

We did get to the top. I breathed from the bottom of my lungs and kept my mouth shut. What joy to get away from the gongoozlers and moor up at our favourite spot in rural Rowington.

I think when the time comes to do ‘The Hatton’ again we should breast up with a willing boat that gives us all, at best, 3 fit people to work the Locks. Third time up the Hatton, for me, and I’m over it, for now. A double dose of Ibuprofen was needed the next morning.

I think I spent the night dreaming Locks.

Posted by The Blondinis afloat at 09:19