BEFORE OUR LIFE STARTS FOR WINTER ON TERRA FIRMA

Let’s face it, we lead the life of Riley. It sounds like paradise and it reads that way as I choose what to write and how to write it. The nature of being human doesn’t always give an easy ride but words are cathartic!?!

Kinver was a great place to stop for the end of our cruising year. I cannot fathom why it is signed as 24-hour moorings in October. We overstayed for a week and there were a few but not many boats on the move. Della loved the café that we went to a few times. It was very dog-friendly and she was given her own bowl of dog treats.

I thought we should check out the troglodytes in Kinver, cave houses built into the hill. We walked up to the troglodytes, in Kinver, and poked our noses through the door of one. The National Trust is in charge of them and I don’t think anyone lives in them these days. We have driven past troglodytes in Tours, France, and Guadix, Spain, where they are habitable and there is smoke coming out chimneys which are built into the hills.

DB needed to be winded to get ready for her cruise to Ashwood Marina and this meant we could finish doing DB’s exterior decorating. Of course, there is more to be done but that will be next year and we need to put thought into it. I steered DB to the nearest winding hole and Cpt talked me through the task as I winded her. The only time I had winded a boat was at the tiller of Avalon Mist. It had been a slow process of 24+ point turns and I was not keen to repeat it. It was so easy winding DB, I think the bow thruster takes the effort out of it. OK, she is a long boat and it takes more than a couple of minutes to wind her but I did it! Another steering achievement for me.

The week in Kinver passed by quickly and our last journey was to Ashwood Marina, about 3 miles up the Staffs & Worcs Canal. Our car needed to be relocated and it made sense for Cpt and Della to drive it to Ashwood Marina, and to meet DB along the way at the Locks.

I knew I could manage the Locks without help but Cpt was keen to be there to make it easy for me. The timing of our meet ups was perfect. I also took DB through a tunnel (short one but it was a tunnel) and over an aqueduct. In the middle of nowhere, a holiday boat appeared heading in my direction and they had no idea what side of the canal they should steer on if boat traffic was coming towards them! I moved to starboard and they moved to their port. I gesticulated meaningfully indicating they move to their starboard. I was beginning to get into the overgrowth and was losing my happy feeling!

Wifey said, “He doesn’t know which side he should be on!”
He said, “It doesn’t matter.”

Cpt and Della came aboard DB at the penultimate Lock of the day and I worked the last Lock. That night we stayed on the Cut close to Ashwood Marina feeling excited that DB was going to bed the next day and we would begin the drive to España. 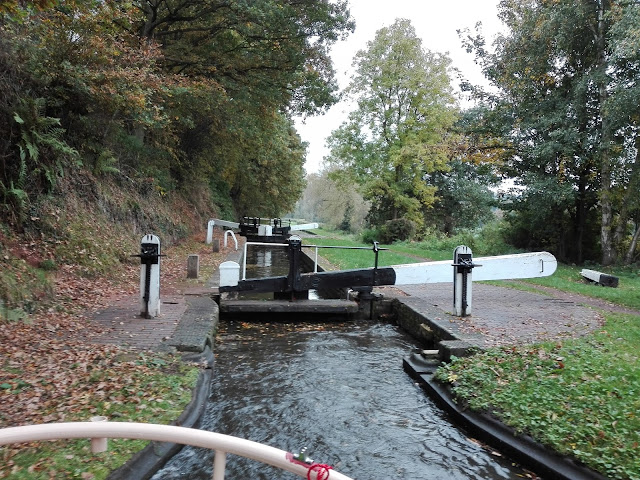 Our final day on DB and we needed to pack up, clean up and get on with our next journey. Ashwood was not ready for us until the afternoon so we took DB up Greenforge Lock where we could tie above and load our ‘red’ car with far too much stuff including my classical guitar and 2 ukes. Once the car was loaded Cpt reversed DB down Greensforge Lock, Quelle manoeuvre, and back to waiting to go into Ashwood Marina.

Later, we got the call that our mooring spot was ready and I helmed DB in while Cpt was doing the final shut down! I was pleased that I negotiated the boats and crane-in-action as we tic’d along, and I concentrated to avoid a ‘Westie’.

All is better than good and DB is safe and sound for the winter.


I have been asked for the dog biscuit recipe

-rolled oats    I use porridge oats (no flour, no salt)
-chicken stock   I ask the butcher for some chicken scraps and make my own stock and include some of the meat off the bones
-tin of sardines

Method..... 2 - 3 cups of oats adding enough stock to mix into a biscuit texture including the sardines.
I put baking paper on the base of the oven dish and use plastic wrap to scoop the biscuit mix into the dish. The plastic wrap also makes it easy to pat the mix flat. Use a knife to mark the small squares so it is easy to break into pieces when baked.
Gas Mark 6 (Moderate oven @ 180C) 45 mins then turn biscuits over to cook another 15mins or until biscuits are firm. I don’t want them to be soft as moisture will cause them to go mouldy! I don’t have space in the freezer on DB to store them. My oven is a normal oven, not a boat oven! (In Spain, I freeze the biscuits.)

Della seems to like these biscuits. She is not fussy about food!

Posted by The Blondinis afloat at 02:11