The moorings, across the canal and opposite The Three Horseshoes Pub, Winkworth near Hemel Hempstead, are a great place to stop and tie Db onto fixed mooring rings. We chose not to visit the Pub although the possibility was loosely discussed. We were, both, a bit tired after the unplanned journey and Locks after Berkhamstead. Still we thought we might stay there a couple of nights, as rain was forecast and we were inclined to be fair weather boaters.

The nice evening sunset was forgotten in the morning as rain was in the air. Nb Gui Lei, the boat moored in front of us, showed signs of preparation for movement with the tiller handle extension pinned into position and engine running.  Chris had a quick word with the occupants when he walked past on his Della constitutional morning walk.

“You moving on?” he asked them.

Given a positive response we had no hesitation in pairing with them to share the 18 locks that were scattered en route to Cassiobury Park.  I paced off prepared with my ‘BW’ key to slot into the automated operation box for the swing bridge. It was before 0800hrs and a few road vehicles appeared just as I had my finger pushing the OPEN button. Oh the acoustic warning jangle alerting all and sundry that the barriers were imminently dropping. Nothing the landlubbers could do but wait as there was no going back from my task at hand. DB chugged out from her mooring but Nb  Gui Lei hadn’t quite got her act together and was slow in gaining momentum. I was indicating encouraging ‘get moving you slow boat’ signals as well as avoiding eye contact with the wannabe roadsters. Eventually both boats passed by and I pressed the CLOSE button only removing my finger when the barriers returned to their resting position. Oh the responsibility and control I briefly held at my finger tip!  I know I make a meal out of this operation but it is fun. 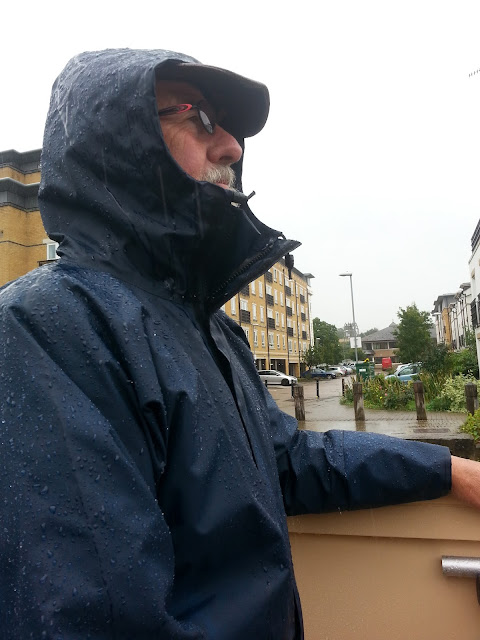 Job done and now on to Lock-n- Lol with Merv, the sole crew from Nb Gui Lei, while the Captains’, Chris and Phil took our respective boats to the first Lock of the day. Rain drops began to fall and my waterproof jacket was put to the test. It was not 100% but it was a better find than other jackets I’ve found! I teamed it with my waterproof trousers which were the business! 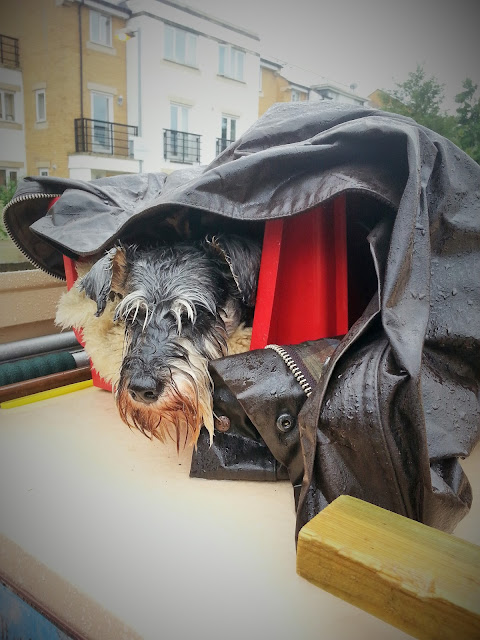 Della insisted on sitting outdoors in her navigator’s position on Db. A combination of our not so waterproof extras did combine to give a modicum of protection over her in her box. Her face peeked out at us and she weathered the storm without giving any emotion away!

We met the Waterways Chaplains assisting at one of the locks in Hemel Hempstead. They reported they visit people, on boats, in need of benefit advice and making sure their basic needs, like food and water, were being met. It was kind of them to assist us through the Lock given the grotty weather conditions. They radiated warmth and goodwill.

I knew the next Lock was more than a hop skip and jump away so I stepped aboard Db. Merv, on the other hand, was told that the Lock was nearby so he walked the few yards and the rest, which was closer to ¾ mile!! I think he must have taken over the tiller command, soon after this. 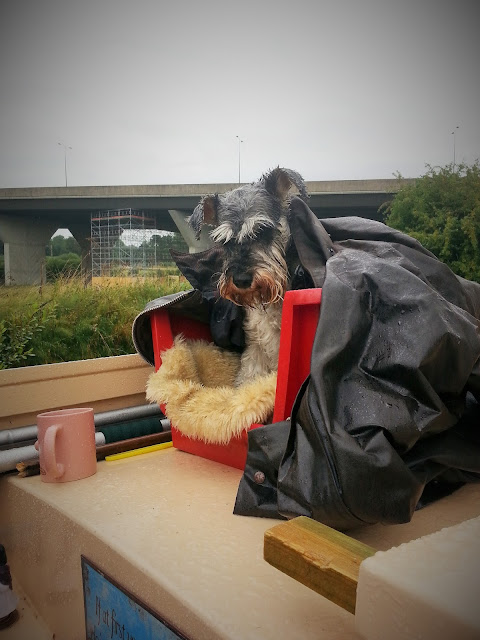 When we reached the M25 Bridge we knew, for us, that we were close to finishing for the day. A few more Locks and then we could tie up. Always an unknown as to what available mooring space would be available. The low level of the canal turned out to be the problem when we got to Cassiobury Park as we ran aground leaving a water gap to step over to the Towpath. Finally we got in but we were on an annoying lean and loosening the mooring ropes didn’t float us level. Easy decision to move, early next day, and we headed through Rickmansworth tying up at the Tesco moorings for a quick shop and followed by breakfast, on board.


I recognised a huge Dutch Barge that we had seen moored at Paddington Basin last year. Not a vessel I would choose to continuously cruise but each to their own....

We continued past the line-up of continuous cruising boats and at the end of the line we moored up before the rain poured down! There was a hint of effluent smell, outdoors, and a glance in the trusty Nicholson’s Waterways guide identified our position close to the Sewage ponds. The smell was inoffensive as the wind and weather was not ramping up the odour. More importantly the rain was not going to hold back and we managed to get the wheel house cover up before the raindrops began to fall.

We stayed moored for 48 hours and moved on when we could see more than a patch of blue sky two days later.

Posted by The Blondinis afloat at 05:22