REPLY TO LISA NB WHAT A LARK 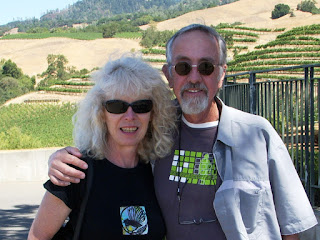 This blog is a reply to Lisa in response to her comment on my previous blog. Try, as I do, to respond to Blog comments I my posts to REPLY just don’t work. So in response to Lisa....

Chris is Yorkshire born and his family moved to NZ, much to his chagrin, when he was a young child and he was close to desperate to get back to Blighty in the swinging 60’s. And he did. The last thing on his mind, some years later, was to team up with a Kiwi.

Sarah, me that is I, is from NZ and was keen to ‘do’ my OE ( old term, overseas experience,  now known as ‘Gap year’) before I settled down to  ‘normal’ life. I met Chris in London, we moved to Portugal where he had a donkey stable in a field and so began our ‘good life’ in the ‘United States’ of Europe. 11 years later we left our ‘love nest’ and the bureaucracy that frustrated us, and returned to begin a new life in NZ with me thinking this could be our forever plan. Sadly our two dogs, Blue and Dolcie, were not fit for this journey.

It soon became clear, when Chris was battling a life threatening illness that he wanted and needed to return to England, his ‘mother’ country, and all that could humour and challenge him there along with the possibility of mainland Europe beckoning, as well.

In 2009, a couple of ‘friends’ asked us about possible holiday adventures in England, Chris immediately thought about Narrowboat holidays. The friends ended up renting a ‘Tupperware’ boat on the Thames, and the seed was planted with the dream of us returning to England to live on a Narrowboat-to-be. Chris and I spent a lot of time searching Narrowboats for sale on the Apollo Duck website. 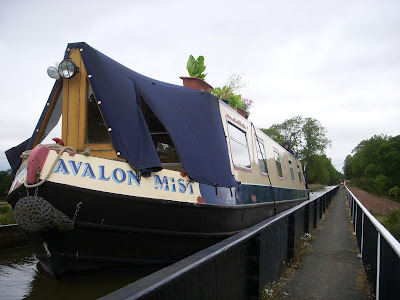 In 2010 Chris flew to England on a mission to either look for a Boat Builder to build us a boat, or to purchase a ‘pre-loved’ Narrowboat should one take his fancy. NB Avalon Mist (AM) was for sale at Devises Marina and Chris made the decision that she will be a good starter for us and we could afford to buy her. Purchase made and the following year, 2011, we both came to England to try out the lifestyle and move AM to Mercia Marina near Derby.

2012, we packed up our home in NZ and flew to England in mid March. Della, our Miniature Schnauzer, was flown over seven weeks later to join us on Nb Avalon Mist.

Posted by The Blondinis afloat at 08:58