The final Locks of the season, for DB, is the Foxton flight of 2 Staircases consisting of 5 Locks per staircase, 75’ total fall (rise if you are going up!). This is a popular Gongoozler’s hangout.  The morning of our ‘flight’, movement was suspended due to an obstruction in one of the lower locks and it was likely it would be late afternoon before we would be on the move. The worst case scenario was we may have to wait until the following day for the all clear. A big thankyou to the Foxton C&RT Volunteers, they kept us well informed.

Following the incident in August 2015, Concrete slabs had been used to decrease the size of the hole from the pound into the Lock to prevent people who fall into the pound being sucked into the Lock. So the obstruction, on our day, was the slabs of concrete had got washed into the Lock. Naughty concrete, a Slab-ology engineer is needed!

We had planned to treat ourselves to breakfast at the Top Lock Cafe. I need to eat my words in thinking this would be a treat. 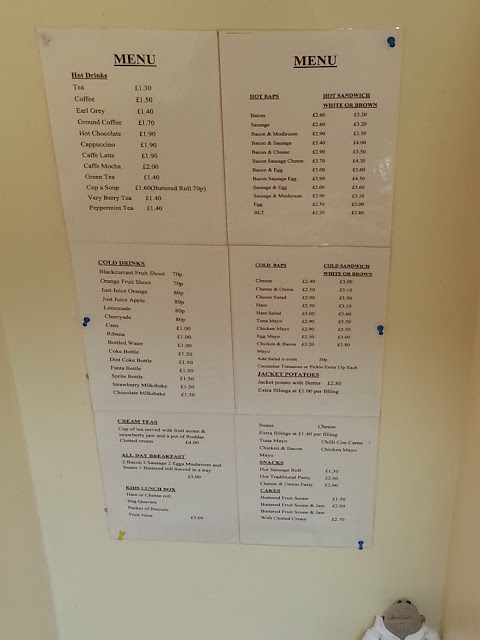 The photos tell the story. A beautiful setting that is spoiled by a rubbery overpriced breakfast.

This is how a Gongoozler becomes bamboozled. I won’t go on about it but you won’t see me eating there again.

Back at DB, chatty gongoozlers stopped to pay us compliments in favour of DB. In between sharing our lifestyle who should walk by, The W-a-Ls.

They were well back in the queue of boats but once they escaped our clutches they went off, on foot, to suss out the obstruction and head landward to Market Harborough.

Within an hour of them leaving, there was volunteer action and we were told we could move into the Lock!

“What about the boat in front?” I asked.

“There is no one on board” he said “They are crewless.” 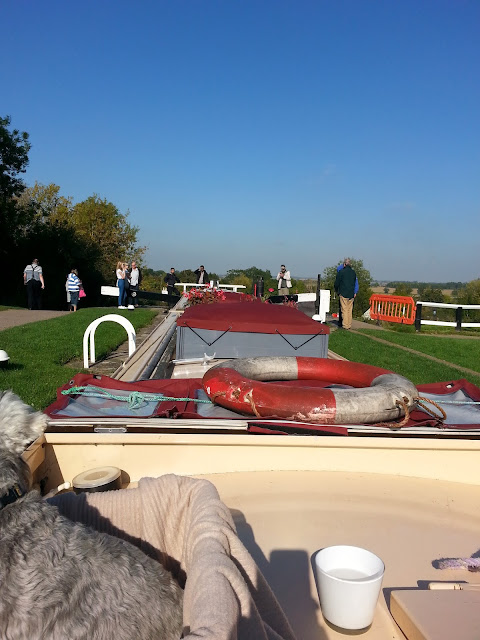 I wo-manned the helm and let Chris do the paddle and gate action with a little help from the sprinkle of gongoozlers.

Once you are ensconced in the system there is no way out. In our case we are going down the flight. There is no possibility to turn around until we are out of the bottom lock.

There is a feeling of abandonment as you drop 7ft to lock bottom but as soon as the front gates are open you are suddenly on the level ready to drop 7ft again! A life experience of being 6’ under! This is sounding theatrical. In Lock descent there is no chat apart from a bit of one way conversation with the trusty navigator, Della.

On the ground the action is at Bow end. A thumbs up signal is the barest sign of communication between Chris and me and is important for the all clear for DB to go down.

Moving down the staircase is easy. DB is trapped for 5 locks, just a case of passing through the open gates between the locks. 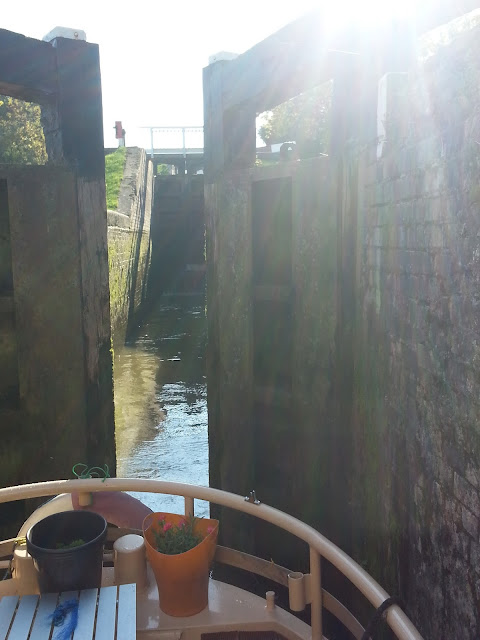 Speed is not a consideration just a gentle throttle to move her forward. Between the two staircases is a small pound which at a guess-timate it is 74ft long. The Locks are not flush in line, they are off centre. Why is that? I couldn’t get a visual overview of what needed to happen and my ‘sights’ showed that I was heading for a speedless slam into the lock entrance. Still it did cause me to lose my footstool footing and plonk on the floor. I dealt with it and down and onwards we went. I was told later that everyone hits that Lock.

I was elated to leave the last Lock. Soon we’d be underway to Market Harborough, a place we enjoy spending a few days. Once I was fully out of the Lock, my last challenge was the sharp turn onto the Market Harborough Arm. Sometimes DB feels really long and she will only just fit the turn. I had to bow thrust her to move her Bow off the far towpath. Her stern was touching the near towpath out of the Lock. Have you gone to sleep yet? I got her moving and straightened up to move past the open swing bridge. Chris got back on board after swinging the bridge back into position and took charge of the wheel.

One more swing bridge to go and Market Harborough was a few miles away. We moored up near the ‘gates’ to Union Wharf and within a couple of days we were plugged in at the wharf. £10 per day.

The last time DB was on mains electricity was 18 months ago! It is a real treat to have unlimited power. We can turn all the lights on! I can do the washing without running the engine. 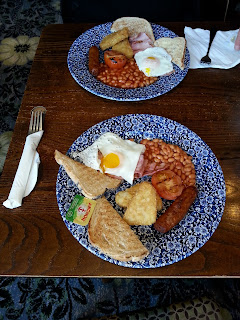 We can have a Wetherspoons breakfast that is good value and tastes great.

The boat community is friendly as are the passing gongoozlers of Market Harborough.

I can watch the AB’s play the World Cup semi-final on tv.

I am naming Autumn on the Cut as Live Monet. It is a beautiful season.

We have been at ‘Arborough for  about 10 days and in less than 10 days we will be at our destination for DB, this year, Debdale Wharf.

DB will be craned out of the Canal and placed on hard standing and we drive off to Spain for a few months under the winter sun. 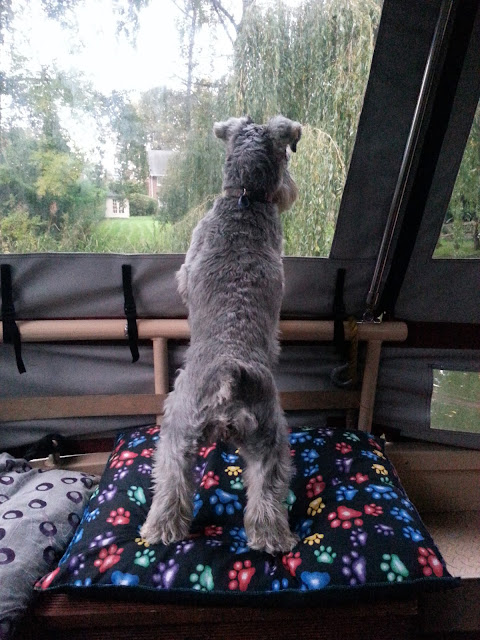 Posted by The Blondinis afloat at 04:37