BACK ON THE OXFORD

A sharp turn to Starboard off the River Thames moves DB onto Sheepwash Channel and it is not long before we turn sharp to Port and enter our first lock on the narrow Oxford Canal. The narrowness of the ‘Cut’ is a mind swerve after the wide R. Thames. It is a timely reminder that a passing Narrowboat is not out to do a ‘hit and run’. Boat ropes need to be tied effectively with a holding the Bow, and a gunwhale rope closer to stern  and a stern rope with the latter two coming in at an angle so when the boat responds to passing traffic the lurch is buffered. Is that a full and general description? Our first night moored near Aristotle Bridge was a bit rock ‘n roll with DB moving every time a boat went past. The ropes were sorted out before the heavy rain fell and we stayed another night thinking fair weather, be fair and let the sun come out again.

It was still patchy rain when we moved on, the next day, but the promise of skies clearing gave us hope. Will it be the promised Indian summer? We went slowly past the motley bunch of boats in the Agenda 21 moorings. I know I sound snotty or is it snooty with my choice of word for textured green rusting ‘eye candy’. Then there were the locked lift bridges that needed the BW key to set them free. At least these ones were user friendly to lift.

We were getting close to Thrupp, and I thought I had sussed out with Google how to get to the Sainsburys Supermarket in Kidlington. We moored at the water point and I took off with my trolley, in tow, only to remember that it was not Sainsburys but a mini local Co-op, I have visited before. We cover a lot of miles with our lifestyle and it is fun, on one hand having fresh pastures, but it is frustrating when the memory gets cloudy and I beat myself up.  The friendly Co-op, helpfully, told me that Sainsburys was a good ½ hour walk away. I had a fleeting look on the Co-op reduced priced goods shelf and thought ‘blow Sainsburys I can get enough to fill my trolley here and get back to DB for a late lunch rather than waste 2 hours getting to Sainsburys and the rest! 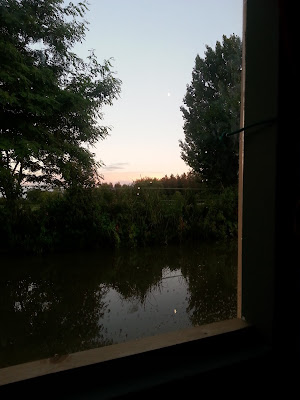 After lunch and with the water tank replete, Della and I walked the towpath in the direction of our next Lift Bridge in Thrupp. I noticed the vacant visitor’s moorings before the bridge and an attractive warm sun was shining in the late afternoon. As DB got closer I flapped my arm pointing my finger at the mooring to Chris who was nearing on DB. This was a perfect spot to end our day.

Next day, the autumn sun shone and the automated key operated Thrupp lift-bridge was a boon as the following manual lift bridges became complicated. I’m 1.7m tall the same as 5’6’’. I could just reach and grab the short metal chain on the manual lift bridges. To pull on the chain which will raise the bridge was too much of a struggle for me. I think the bridge balance was nonexistent and I kept dropping the bridge. Safety is paramount and it would have wiped out Chris and Della if I had lost my grip with DB passing by. The only solution was for Chris to raise the bridge and for me to steer DB. Chris was able to get the bridge arm to ground level and then sit on it which kept it down.
Yeah defeated I walked off, in a huff, with Della and paced off on the scenic towpath to the next lift bridge about a mile away. I was more than pleased when I saw this bridge was not in situ but resting damaged in a farmer’s field. When DB got close, I got on board and told Chris that I had taken care of the bridge and it wouldn’t bother us or anyone else again!

There was, yet, another Lift Bridge and I went bravely to the task. This bridge was relatively new and had an aluminium decorative pattern covering its wooden arm. There was still a metal chain to pull but this chain could be threaded through the metal ring on the ground. I was able to step on to the chain using my huge foot to help keep hold of the raised bridge while DB passed by. There is only just enough room for a Narrowboat to squeeze past so it’s not like it can move with speed. I literally dropped the bridge as soon as it was safe to do so. There are more lift bridges to pass but they are left fastened in a raised position.

Back to Lock-n-Lol. The Locks on the Oxford Canal are not difficult to operate. I’m aware that if a Lock is in favour of an oncoming boat then with water conservation paramount it is not etiquette to ‘steal’ the Lock. After the debacle of the Lift Bridges I was not happy and when I walked up to Allens Lock to get it set for us there was a Narrowboat mooring up, I assumed to come down the Lock. Courtesy dictates that the Lock being near full was in their favour. I topped the Lock up and opened the gate for them. I did wonder why the ‘lazy moo’ crew was not getting involved.

“We’re not going down the lock.” she said.

I close the Lock Gate, empty the Lock, Open the bottom gate and drop the paddles, DB enters the Lock, I shut the gate, Open the Paddles, and fill the Lock. DB on the rise and Lock filled I move to open the gate. Matey ambles over.

“Grr...” I say. “Don’t moor on the Lock mooring if you are not going to use the Lock. Are you holiday makers? Grr...” Their boat was not a holiday boat!

Breathe, breathe in the air I remind myself. I am hormone deficient these days. Next Lock and I empty it and open the Lock gate. Bleeding gate won’t open fully. I can’t see an obvious obstruction unless it’s my attitude! Chris gets DB’s nose into the Lock and we both think DB might be able to squeeze through with a bit of boat pole leverage. DB got stuck half in and half out of the Lock. Phone C&RT for rescue.

“Where are you?” C&RT ask. “Someone will be there in half an hour. Don’t panic.”

Seeing is believing. In the meantime I open the sluice on the top gate to let some water flow through the Lock and the force of water gives DB the push to reverse out of the Lock with a bit of boat pole leverage. One problem sorted.

Within ½ an hour Cptn C&RT arrives with his set of metal rods that attach together and extend into the longest pole with a rake head. Obstruction identified as drowned twigs matted together. Human effort with an appropriate tool clears the twigs and they get flushed out of the Lock with the top gate sluices opened.

We’re on our way from misery to happiness.

Posted by The Blondinis afloat at 03:36