We were warmly welcomed at the Watford Locks by the friendly volunteer ‘Lockie’ we met a few months back coming down the same said Locks. Nb DolcieBlue has a recognisable unique aspect. Shame about her owners!!

We had left Norton Junction, early in the morning and cruised under the newly risen sun to get to the Locks early so we could fill up with water and eat breakfast. No we didn't go to the nearby M1 Watford Gap Services. The approach to the Locks runs in view of the Services, the noise is loud but I was almost fooled into thinking it was a camping ground. I must have been dreaming when I thought I saw pitched blue tents.

The Lock rule of thumb is 6 boats up locks then 6 boats down and that worked in our favour as we were placed to be No.5 going up. I made the snap decision to take the helm and steer DB through the Lock sequence of 7 Locks which includes the staircase of 4 Locks.

I practised my ‘learned’ recent instruction to ‘SLOW DOWN’ when entering the Locks and achieved the skill in nudging or edging DB into position as she smoothly enterered the narrow space of the Lock. Once her ‘nose’ is in then DB glides along the water and when her stern is about to get level with the Lock cill marker I move her throttle to gently reverse as the Lock gates are being manually closed. Easy peasy.... The Lock fill is barely noticeable and there is no boat movement reacting to water gushing through the open sluice like in many Locks! 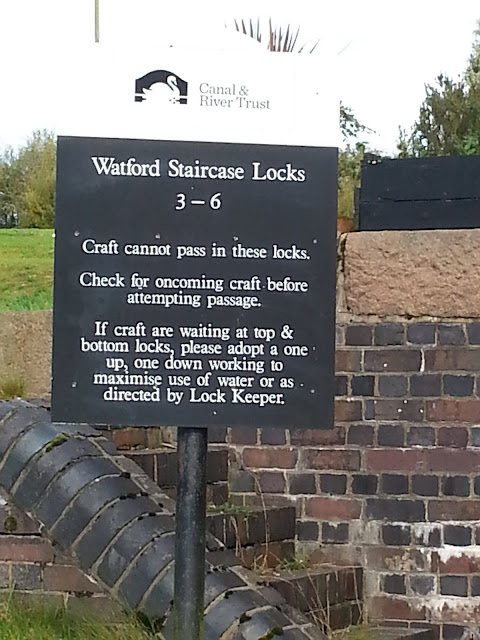 My manoeuvring challenge occurred exiting No.2 Lock into the pound before the staircase Locks begin. Any boat cannot physically turn until its stern is out of the Lock. DB needed to move say  a wide 30 degrees and then straighten up to line up to enter the next Lock by bringing the stern to the Right. Now this probably reads like gobbledy gook but I really wanted to point out that it involves skill to inch a boat, metrically speaking, into position without causing damage or an outbreak of verbal Tourette’s. I was ‘onto it’ and my success, in this, was acknowledged by Chris and the 'Locky'. Of course, the 'Locky' did say that he had seen a few boaters perform this better but I had a Bow Thruster in the equation! I can best answer this with my parody of Fred Dagg’s Gumboot song “If it weren't for your Bow Thrusters where would you be?”

We were heading to Welford but realised that it was too far to go in one day, 16 miles more or less, and we needed to remind ourselves that we do no need to rush! The leaky Crick Tunnel loomed and I happily stayed indoors with Della as Chris steered DB through. Only one boat coming the other way this time. One boat is still one too many! We didn’t stop in Crick Village. The internet connection is non-existent and we wanted to be able to ‘go on line’. An hour or so later we found a beautiful rural mooring with unobstructed all day sun. We used our mooring chains to tie up and I took Della for her territory marking walk. She likes to know her boundaries so we won’t get lost!

A few boats cruised by on their way to somewhere but not here and the words spoken with a smile across the Cut were “Couldn’t ask for a better day.” Then we recognised W-a-L (Nb What a Lark) approach and turn in to moor in front of us. We spent the afternoon and the next day chatting almost non-stop to Lisa and David.

I highly rate this Leicester Arm of the Grand Union Canal. It hosts beautiful countryside and gives a sense of freedom. The towpath has a few ankle deep holes in it and I took a fall as I was too busy looking ahead when I was walking. The secret to falling, apart from ‘Don’t Fall’, is don’t put your hand out to save yourself just roll when you land. I let the workmen grouting a nearby canal bridge know of my misfortune. I also found a sizeable stick to plant in the hole as a warning. Impale at your own risk!

Two days later we were on an early morning move in the direction of the short Welford Arm to spend the night in Welford. We said our ‘see you later, whenever and wherever that may be’ to Nb W-a-L.
We were hopeful we would get to the end of ‘Arm’ 48 hr mooring at Welford and we did. As part of my tactic I helped a rental boat with a friendly couple aboard to ‘wind’, and moor in a shorter length mooring space available nearby. They could have moored alongside us but in the next few hours that space had been filled and then another three boats had creatively tied up meaning we were boxed in and the water point mooring was blocked. No worries, next morning we were freed and moved in the direction of the Foxton Locks. Chris took the helm, to get us on our way and through the Husbands Bosworth Tunnel. I took over steering while he went indoors to have his breakfast. I heard the blast of a boat horn from behind me and looked back to see who it was. NB W-a-L. Nice photo of DB on the move thanks Lisa, a rarely seen picture from our point of view!

I almost had a close encounter with an arched bridge, a bit further on. A boat had appeared from around a bend heading towards me. Navigation rules means traffic steers on the Right when oncoming traffic approaches. I got over to the Right and became slightly grounded. It happens. I used my nouse to get moving but the bridge was close and I had to take effective action to deal with the situation. Chris appeared and offered to take over. I refused his help as it is important for me to be able to cope with all and sundry!

That day, we stopped about a mile from the Foxton Locks. There were the last of the blackberries ripe for picking and compote to be made. More good Lock-ins could wait for now.

Posted by The Blondinis afloat at 05:51