30 HORSE BRASSES HANGING ON THE DOOR


I finally got ‘a round tuit’ and completed half of a whole task that is one of many long standing finishing DB projects planned for this cruising season. I suppose being, currently, grounded on water is floating our boat and it makes sense not to waste time on twiddling fingers without purpose! Well that is my thoughts.

The project in my hands is ‘tarting up’ the door that is in situ between the living room and bathroom. When we first moved to live on DB in April 2014 we needed to sort out some privacy in the bathroom and we hung a rug over the gap. That is, our beautiful Moroccan rug purchased early this century on a trip to Maroc. You don’t go to that country without buying a rug. It was so lovely, the rug that is, and the experience, mostly. That rug went to Portugal where we used it as a wall hanging and the sun began to fade it, then it went to New Zealand and continued as a wall hanging to fade in the sun. With the move to England we had no plan for its use and it was locked up for a couple of years in the garage we rented for our diminishing stock of Life’s Laundry. I didn’t want to part with it and it was nice to make a functional feature of it on DB. Now the rug is on the floor in Spain!

Ikea’s Bargain Basement beckoned, last year, and Captain Carpenter found a couple of wardrobe doors that would suit the purpose of becoming bathroom doors. Like its owners, the doors are not peas in a pod and both need a bit of work to get them in aesthetic ‘door’ condition. I won’t even go into detail about me and Cptn!!
I spent some time, last year, filling and sanding plus undercoating one of the doors and then a couple of days ago I gave it more attention to detail so I could get a finish coat of paint on it.

I knew that once the living room door-side was painted then the 30 Horse Brass collection, from Nb Avalon Mist days, could be taken out from ballast duties and put on show. 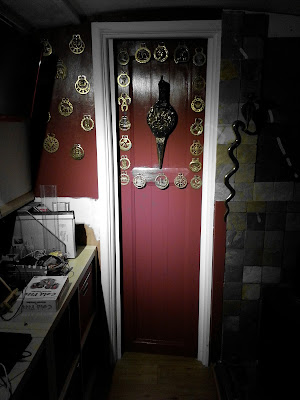 Thanks to Cptn for banging them in along with the suggestion of putting the fancy brass bellows in central position. It makes me feel we have our crown jewels on display.