Here we go, kind of backwards to go forwards. Captain has 2D (Dentist and Dermatologist) appointments, imminent, and this is influencing the direction of our cruising path. Mind you we had 2 directions we could cruise but to go through Leicester and along the River Soar is more direct and a favourite.

We had been waiting at Market Harborough for our intrepid travelling Kiwi friends to arrive and spend a couple of days with us and experience a brush with canal life. We decided to take them up and down the Foxton Flight of staircase locks. Up would have been enough but we have to get down them to get on with our journey. 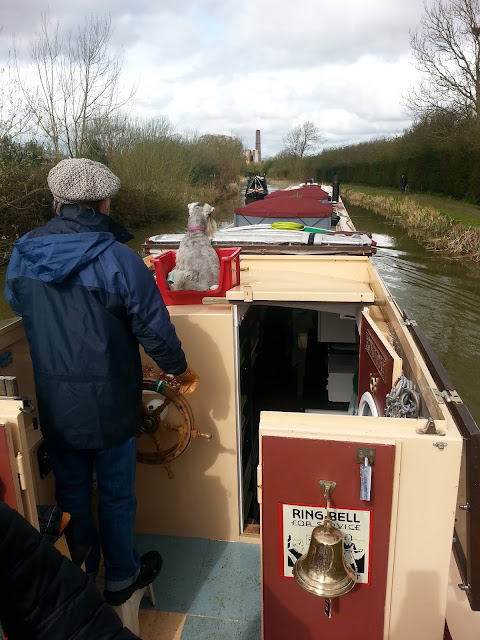 The Foxton Flight is managed by C&RT Volunteers and is a mixed bag of helpfulness as it is helpful for ‘newbies’ (holiday boat rentals) and for solo boaties but can be bothersome for those that do locks as second nature. The flight is not busy, at this time of the year, and I spoke to a C&RT Volunteer after DB had gone through the swing bridge into the Foxton 'Basin' to see if we could go straight into the bottom lock and up the flight.

"I can do it, I can do it" I said. "Red before white." He left me to get on with the job. A gongoozler helped me close the lock gates, so I suggested they go through the next lock on DB. We are like that...sharing the experience.

DB moved up the locks and sat in the 5th lock waiting for me to open the gate when the water was level with the mini pound. The Volunteer arrives smirking.

"I thought you said you knew how the locks worked. Ha ha you have to open the white paddle at the next Lock."

"I thought you were a Volunteer" I said as I began to walk up there. "Are you going to open that paddle for me please?" He was walking ahead of me.

“It's a fine line between pleasure and pain, you can do it once but don't do it again.” I commented to a fellow boater, from Debdale Wharf, who had stopped to chat. He gave me an understanding look.

All that is needed is a sign saying something like ‘Open the ‘bleeding’ white paddle at the lock above so you can exit this Lock.’ It’s kind of like lock synchronicity....Lock above needs to be empty so gates below can open likewise Lock below needs to be full so gate above can open. People think Lock operation is a piece of cake, or is that just me!

Soon DB was at the top Lock and we took our friends for a wee cruise of a couple of miles to just before Bridge 52 where there was a winding hole. I didn’t read the fine print in my Nicholson’s guide.

Cptn said “Is there any restriction on length for the winding hole?”

“Oops.” I gasped when I glanced at the page in question and saw 65ft max.

We are 68ft and if we couldn’t turn around then it would have been a nuisance. Still we were going to see if we could turn, the canal level was good and it was to our advantage if we could get back to the Foxton Flight before it closed for the night. I went to the Bow end so I could jump off if a rope was needed to help swing her. A few ‘points’ into her turning and we were clearly going to face in the return direction. “Yay.”

Later and back at the Top Lock of the Foxton Flight, it took a while to locate a C&RT Volunteer. I had a sinus headache that needed attention from my medical stock and I persuaded the reluctant Volunteer to instruct and supervise our friends operating the Locks, to get us down the ‘Flight’ while I could stay calm onboard DB. Halfway down the ‘Flight’ and I was feeling better. I briefly chatted with the Volunteer who was very happy to be chatting with our friends. She told me that they were from NZ and she had just come back from a holiday in Wellington where they are from!!

The end of day sunny sky swiftly became hail and snow which was a frozen white welcome in the morning. I didn’t take a photo but I did throw handfuls of snowballs and sheets of ice into the canal after we had said "Laters and Safe travels" to our friends. We stayed put for another night and moving a few metres along the canal, the following day, to wait for Lisa and David on Nb What a Lark (WaL) who would be passing in the opposite direction.

We don’t want to rush but we want to get to Loughborough before May Bank Holiday. The Leicester Grand Union Canal is lovely. Beautiful moorings are everywhere. 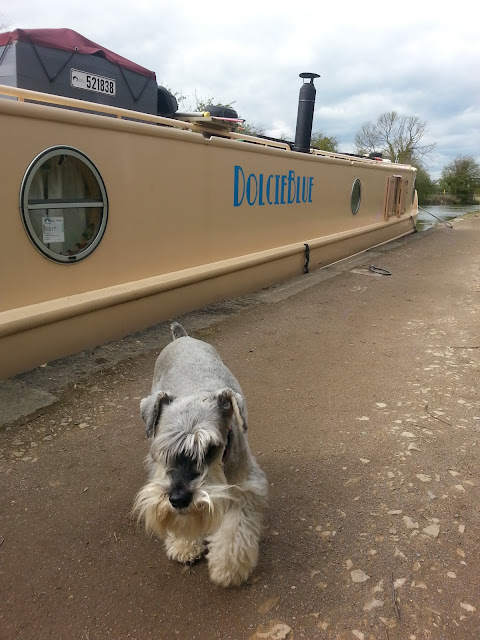 The Locks are hard work getting the paddles moving but I have been out of action for a while! Our first proper Locks and we shared with Nb Knickerbocker Gloria, (Knickerbocker Glory is a layered cream sundae), and its owners described how they share the steering and Lock duties i.e. they take turnabout with the tasks. We think that is a brilliant idea and will endeavour to copy it! In the event of injury / illness it is important I am skilled and competent with steering the boat!! Steering the boat involves concentration but it is not insurmountable. Contact sport it is not!!

No more comments from Joe Gongoozler when I am at the Lock “Why do you always get the hard job?”

Posted by The Blondinis afloat at 00:22